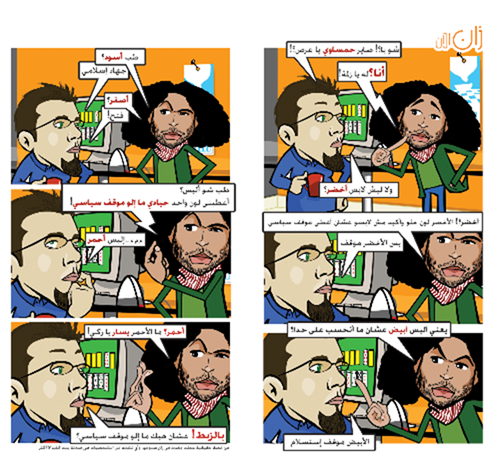 “It is a great future however we already have a rich past with comics. You can see ‘Samir’ comic here from the 1960’s. We do have heritage in comics and [there is] a website called Arab Comics which documents the history of comics in Arab nations from the 1920’s, maybe 1923… This culture has been increasing significantly in Egypt lately. I decided that I wanted to author stories and at the same time be responsible for its outcome. I wanted to show people my vision for my stories so I found that comics are the best medium to deliver my own stories.”

Amer Al Shomali’s book Zan Al ann featured at Cairo Comix, and was reportedly well-received by convention attendees. Amer Al Shomali is described on his website as “a Palestinian multidisciplinary artist, using painting, films, digital media, installations and comics as tools to explore and interact with the sociopolitical scene in Palestine. Much of Shomali’s work examines the creation and the use of the Palestinian revolution’s iconography. His art works are part of several collections: The British Museum, the Museum of Manufactured Response to Absence (MoMRtA), Birzeit University Museum, Al-Qattan Foundation.”

Zan Al ann means “Meanwhile…” It is a series of comic strips epitomising the famous Arab sense of dark humour. The language is rough-and-tumble.

[Translation from Palestinian / Egyptian Arabic – we have used appropriate English idioms to try and convey the meaning of the Arabic idioms in the comic. Any suggestions on refinement of translation and nuance are very welcome.]

First Box. Top right.
B: Have you become a Hamas groupie, you pimp? A little bit?
G : Me? Why, my friend?
B: Well, why are you wearing green?

2nd Box :
G: Green? The colour green is nice – of course I’m not wearing it to show my political leanings.
B: But green IS a leaning.

3rd Box :
G: So I have to wear white to not be put in that box?
B: White is a position of surrender.

5th Box
G: Fine. So what should I wear? Give me one neutral colour that doesn’t have a political position!
B: Mmmm… Wear red.

Small text in the bottom under the last image :
From a true story that happened and happens in Zan studio. And any resemblance to the characters is nothing more than damn coincidence.

Comics have been a rich source of political commentary, dating in English-speaking countries back to Punch. Inevitably, perhaps, a comic produced by a Palestinian creator will have very political overtones. This comic conveys a honed, funny, sardonic message. The English-speaking comic book audience is sadly missing out on Zan Al ann by reason of an absence of an ongoing, English-language version of this wry title.

Diplomatic Dispute between Japan and Mongolia over Gengis Khan Manga