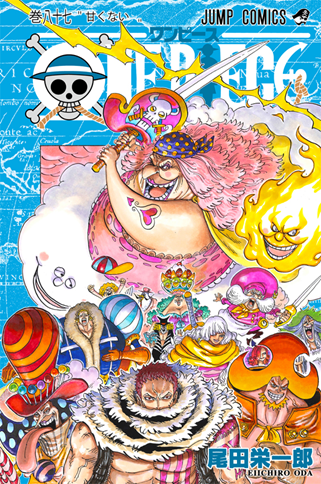 We have previously written about One Piece, the manga epic written by Eiichiro Oda and which started back in 1997.

Twenty years later, Mr Oda is reported as having described the manga as 80% of the way to conclusion.

The plot follows the protagonist, Monkey D Luffy, as he aggregates a crew. Mr Oda explains, “At first I was going to collect ten companions in one and a half years. [But] it took more than 20 years and with 80% of the story done, [but] we still have [only] nine.”

Given we are now around 90 volumes in, we assume we can look forward to a little under an additional 20 volumes of material.

In our first review, we noted,

“Readers will also rarely, if ever, get the impression that the author is making things up as he goes along. Mr Oda peppers the series with details, background stories, even mythologies that serve as framework for future developments in the series. Legends or rumors told offhand in early chapters eventually turn into important plot springboards years later, but never detracting from the main story. Seeding a plot takes forward planning, and works extremely well in very long periodical storylines.”

Since we wrote that review, on 21 May 2018 the Asahi newspaper in Japan reported that the total number of prints of volumes 1 to 87 of One Piece amount to 440 million copies: 365 million in Japan and 75 million for the rest of the world.

This makes One Piece the world’s most commercially successful comic book.

How to Build a World in One Piece