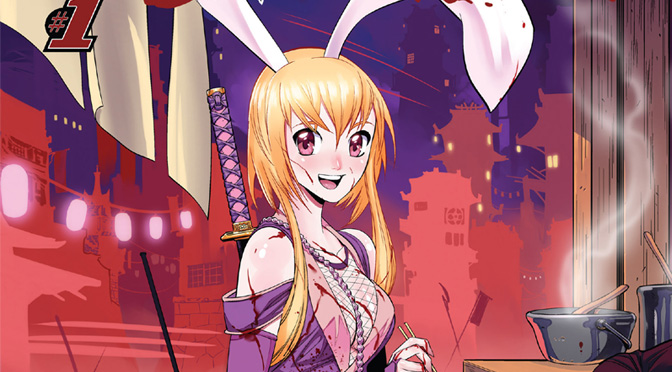 “Blade Bunny” #1 is an action-comedy comic published by Antartic Press, serving as a printed and digital compilation of the first few chapters of the webcomic. The story focuses on a deadly female assassin whose most notable characteristics are her childlike innocence juxtaposed with a sadistic sense of humor, exceptional martial arts abilities, and a set of bunny ears and tail (hence the name.)

The story starts when the protagonist of the story is summoned by a Japanese feudal lord. She objects to being referred to as a “hare,” choosing to be referred to by her real name, which is “Bunny.” Bunny is tasked by the feudal lord to murder a rival. She is then insulted by an unnamed male assassin in the employ of the lord. The unnamed assassin is promptly and nonchalantly murdered by Bunny over the insult. Bunny explains her action as necessary because the lord was going to kill the man anyway – for failing to do the job that necessitated her hiring, for being disrespectful, and because it was a fun thing to do.

In any event, Bunny then proceeds to carry out her mission through a combination of clumsiness, disarming innocence, and the same kind of savant-like martial arts skill frequently used to push plots forward conveniently (even at the cost of believability.) After leaving to collect her reward, she is ambushed by a mysterious assassin by the name of Wolf Fang, setting things up for a confrontation in the next issue.

At first glance, it is apparent that “Blade Bunny” seeks to emulate Japanese comics, largely through its use of black and white art and highly kinetic panels that compensate for the lack of colors, and partly through the use of the large, emotive eyes that have since become representative of manga and anime (strangely enough, this art style is commonly attributed to Japanese artist/animator Osamu Tezuka, who is said to have been inspired by the “large eyes” of many Western cartoon characters, notably Betty Boop.)

The most obvious indication that “Blade Bunny” is only inspired by manga, as opposed to being a localization of one, is that the comic’s panels read from left to right as opposed to right to left. Coupled to this, the comic reads like a mish-mash of elements commonly associated with popular manga properties, without a serviceable narrative base propping it up. For a first issue, “Blade Bunny” projects the impression that the reader has been dropped in the middle of a long-running story that requires extensive backreading.

The first issue may be too early to tell whether it is going to build up to something more, but as far as first impressions go, we think it is best to skip this one. Having said that, to their credit, the creators are willing to make money on their merits (as exemplified by a notice on their website that you should only turn off your ad block if you feel that they deserve the revenue.)

Tasty Bullet (revisited)—“You got to get it together faster”