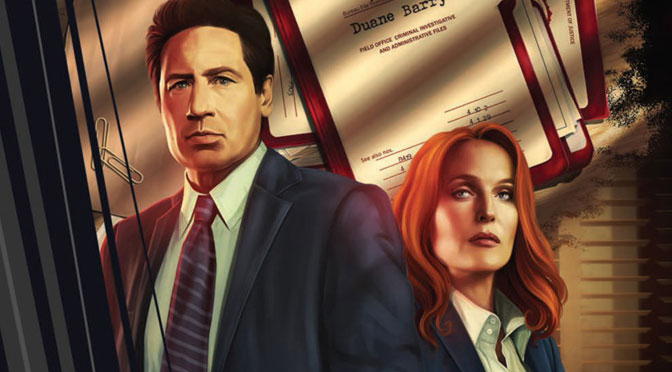 The X-Files: Case Files – Florida Man #1 is the first issue of the miniseries and the start of a new story arc that has the main characters, FBI agents Mulder and Scully, visiting Florida. This trip is to investigate a series of crimes involving bizarre behaviour, which local authorities merely attribute to bath salts. Eventually, Mulder and Scully find links to a mysterious emblem and an alligator-worshipping cult.

The X-Files: Case Files, at least the current story arc, seems to be structured in a “monster-of-the-week” format. The Florida Man incident is self-contained, and does not show any connections to the series’ overarching superplot. This technically makes the comic more accessible than most comic-book tie-ins to TV shows. But that might be a moot point as people who would pick up the comic are most likely already familiar with the TV show, since they are the target market.

As for the story itself, it is a mere plot springboard that helps flesh out the setting and the characters. A huge chunk of the first issue consists of banter between Mulder and Scully. The exchanges between the two protagonists, while sometimes including humor that comes off as forced and staged, still works to some degree due to having a very clear base. The usually laconic Mulder is uncharacteristically talkative and irritable due to Florida’s extremely humid climate.

The comic also does a great job of grounding the mystery. The rash of violent unexplainable behavior does not alarm the local sheriff, but his rationale does not come off as illogical or irresponsible. It is made obvious that the sheriff is prejudiced towards drug addicts, and therefore it is simple (and convenient) for him to blame all the untoward incidents to self-destructive drug-fuelled behavior.

While the comic does not yet provide a big reveal to the mystery, it wastes no time in laying down clues and driving the reader towards the realization that there may be an alligator-worshipping cult. What it leaves out is whether there is something supernatural involved.

If there is one complaint that we have, it is the lack of urgency in the story. At no point in the story will the reader feel that the protagonists are in danger. In fact, no actual danger is present in the comic. The story consists of clues and mysteries, and a couple of FBI agents trading barbs and sarcastic quips. For fans of the franchise, this is not completely out of the ordinary and even expected. To a casual reader, it may seem like the story is going nowhere. But as mentioned above, the target audience is existing fans of the franchise, so this is most likely a non-issue. All in all, The X-Files: Case Files – Florida Man #1 is a decent extension of The X-Files franchise, and one that fans should definitely pick up.