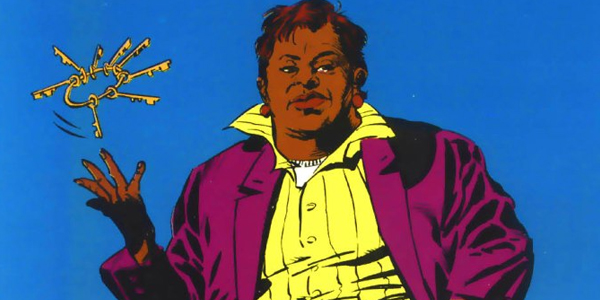 May 1987 saw the conclusion of the comic book series Legends, a six issue title from American comic book publisher DC Comics. Perhaps the most significant development from Legends was the creation and introduction of the character Amanda Waller into DC Comics’ continuity.

In the pages of the first issue of Legends, a uniformed and white army colonel named Rick Flagg meets a woman who in charge of a secret government initiative called Task Force X. Flagg says to the off-panel character, “You’re Amanda Waller?” Waller’s very first line of dialogue in a comic book epitomises the personality of DC Comics’ most formidable female character. “You see anyone else in the room?”

Waller unveils the concept of the Suicide Squad: imprisoned supervillains, intimidated into a team, wearing explosive bracelets as an incentive. “Are you out of your cotton-picking mind, lady?” yells Flagg. Waller ripostes. “Frankly, I couldn’t be more serious, colonel!” she shouts. “And by the way, if you ever again call anything about me ‘cotton-picking,’ mister — I’ll stuff those bright, shiny eagles on your shoulders so far up your butt, they’ll be able to nest in your skull!” For at that point, Waller is revealed as a black, portly, and female. The character’s nickname is “The Wall”, alluding to both her size and to her attitude.

When DC Comics underwent in 2011 one of its periodic re-sets of its continuity, this one called “New 52”, Amanda Waller was reinvented as athletic, busty, attractive, and utterly ruthless. This changed was derisively howled down by the audience. Perhaps curiously, as evidenced by this discussion on Comic Vine, it was not only the female readers who wanted Amanda Waller to revert to the character’s original look. It was the male audience. Here is one insightful comment from a male reader:

“She was more unique when she was broad and short rather than a Halle Berry impersonator… but I don’t see her size as being a crucial part of her character (her background and personality is what makes her ‘the Wall’). Like, she isn’t someone like Dr. Psycho who’s let her outward appearance be the thing that dictates how she is… if anything she’s just aware that her appearance might leave people unprepared for the fact that she has the largest stones regardless of what room she enters.”

Here is an example of the satire directed towards DC Comics at the time, and which contrasts the visual differences in the reboot of the character compared to the original version:

With this reboot to a lithe Amanda Waller, the publisher had earned the audience’s contempt.

The reason for the outcry is counterintuitive. Bossing around superheroes and supervillains, and showing a lack of fear and a core of steel, had produced a surprisingly result. In her original incarnation, over the decades, the character had earned the audience’s respect.

By May 2016, without fanfare, the character had been returned to her original look in the pages of Harley Quinn and the Suicide Squad #1 April Fool’s Day Special (which we have previously reviewed).

Created by John Ostrander, Len Wein and John Byrne, Amanda Waller was unique at the time of her first appearance by being the antithesis of many American comic book characters. In additional to being black, out of shape and a woman, Amanda Waller is often morally ambiguous. This is in stark contrast to the legions of muscular white men who filled (and continue to fill) superhero comics. Waller is ordinarily depicted as Machiavellian, intimidating, and in a position of significant power and influence within the US political hierarchy. As noted by the website ShrinkTank,

“What is interesting about Amanda Waller, however, is that the role she plays is usually reserved for older, White male characters. Rather than continuing with the stereotypical role, Ostrander chose to create Black female lead, who does not conform to the stereotypical body type of comic book characters, into a position of power…. Rather than attempt to build relationships with her subordinates, or lead by example, Waller coerces, manipulates, and intimidates others to achieve her ends.”

Amanda Waller has had an impact upon the comics reading community. Abraham Riesman, writing for Vulture, quotes Ardo Omer:

“Comics commentator Ardo Omer’s voice swells when she remembers the first time she came across Amanda Waller, the hard-ass leader of the Suicide Squad. It was in the mid-’00s, during an episode of Justice League Unlimited, a cartoon starring DC Comics characters that aired two decades after Waller debuted in DC’s Legends mini-series. “The first thing you see is Amanda Waller’s presence, the way she moves, even before she speaks,” recalls Omer, who is black. “She was this short, big, black woman — the kind of woman I’d grown up seeing in my neighborhood, calling them ‘aunties’ even though they weren’t related to me. And she was standing up to Batman!” Omer was in awe.”

In the pages of Suicide Squad, the title which propelled the character’s ride in popularity, DC’s lead superhero character, the Batman, breaks into and snoops the organisation’s headquarters. He is cornered and berated by Waller. “I promise you that, if you blow the whistle on us, I will find out who you are and do the ‘same by you.” Here is an overweight, short, and middle-aged woman in a suit staring down the menacing and fearful Batman.

Amanda Waller is a key character in the Suicide Squad motion picture – although the film depicts a much more psychotic version of the character than that which is traditionally appeared in comics books.

And further to that, the aspect of Amanda Waller which is the most appealing, and which has more or less been forgotten, was laid out in the storyline of Suicide Squad when written by John Ostrander and Kim Yale in the late 1980s. The series, which is currently being reprinted in instalments by DC Comics, lasted sixty-six issues. By issue 40, Amanda Waller has found herself in jail. Between issues 40 and 41, Waller has a crisis of conscience. The character has remorse for her actions. During her time in prison, she is also depicted as having lost some (but not all) of her weight, an external manifestation of a desire to change. John Ostrander describes this in a column he wrote in April 2017 for Comic Mix:

“The volume covers issues 41 through 49 and, with one exception, was co-written with my late wife, Kim Yale. It was at this point that we shook up the Squad (and the book) to a large degree. When we last left the Squad in issue 40 (and the end of the previous TPB), the Squad had disbanded or dispersed. Amanda Waller was in jail as a result of her hand in executing the criminal gang calling itself the Loa; she just surrendered and, at the time, many people both within the book and without wondered why. Why didn’t she fight it? Why didn’t she scheme to get out of it?

In one of the stories in this issue, Amanda explains why to a friend – she felt she deserved to go to jail, that she had stepped over the line. This re-enforced the fact that, so far as I was concerned, Waller has always had a conscience of some kind, even when she crossed it. I think that’s the main difference between my Amanda and the film’s Amanda – mine is not a sociopath. Please note: this is not a criticism of the film; they wrote the character as they saw her, as they needed for their story. Mine is just a bit different. The first story starts with Waller in a prison cell in Belle Reve and the caption “One year later.”

As noted by Writeups.org:

“Being at the end of her endurance and aware that she was on a spiral of hatred and violence, Amanda Waller wanted to be sent to prison. She requested a plea bargain without playing hardball with the government, the charges were dropped to manslaughter and she was denounced as a vigilante having acted without government sanction or support….Amanda Waller spent a year in prison.”

Character evolution is regarded as good writing in a novel. But a fundamental evolution is extraordinary for a leading character in a superhero comic book, where the status quo of good v. evil must be maintained. It is a shame that this has not been revisited. But the deviousness and moral ambiguity of the character has, over the years, been too much for both writers and editors to resist.

Amanda Waller continues to have an important place within DC Comics’ storylines, as antagonist, catalyst, mastermind, and intimidator. No other character in the American superhero comics industry is both plain nasty and outright inspirational. Happy thirtieth birthday birthday, Amanda Waller.