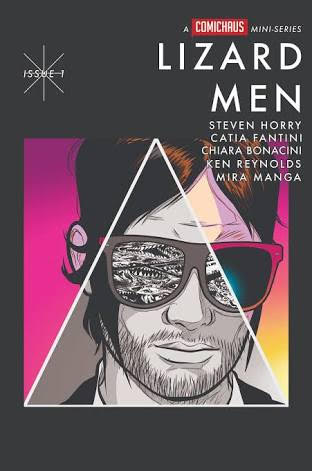 This week we continue our exploration of fine, independently published comics with a review of Lizard Men #1-3.

Skepticism with politics in the Western world is perhaps no less pronounced than in the United Kingdom. In the 2000s, Tony Blair’s metamorphosis from millenarial rockstar Prime Minister to the betrayer of Labour, manifesting in an invasion of Iraq, has many people regarding him as a war criminal. Most recently, we have the illogic of Brexit spewed by the likes of demagogue politician Nigel Farage and then, amazingly, perpetuated by ostensibly sensible politicians on both sides of politics. Voters who have come to adulthood this century must be utterly baffled about how the profoundly important business of a nation like the United Kingdom can be carried on by people who seem to turn away from not just rationality, but also a moral compass, apparently on a whim.

Writer Steve Horry has a theory which explains everything. When gay icon, recovering heroin addict, and Brit pop musician Dylan Zamani is elected to become prime minister in the 2020 elections, he promises a change to politics. Supported by young voters called “Zamanstas”, Dylan regards himself as “more vision than details”, the term he uses when he discovers he has an actual office. (Dylan is vaguely similar to Russell Brand in style and manifesto.)

Dylan’s first act upon becoming prime minister is to deface the portrait of Margaret Thatcher which sits in Downing Street – only to be told that he was not the first Prime Minister to have done that and so they have multiple copies. What could have caused these generations of prime ministerial rebels since Thatcher to have shifted from being disestablishmentarian to instead tugging the forelock to realpolitik?

Two men in white suits watch Dylan and quietly let loose a hellish creature called “the representative of the ordinary”. When Dylan sits himself at his new desk revelling in his success, the words “Instruction will come! Our will be done!” suddenly boom around him between Cthulhuian images of predatory teeth and tentacles – the “lizard men” of the title. The two men in white suits, named Ian and Alexander, confront Dylan and tell him that he must obey the orders of the horrible and demonic lizard men, called the Annunki. It evolves that the Annunki hold dominion over humankind.

When Dylan refuses to obey at the conclusion of the first issue, Ian and Alexander magically dump him into a slum housing block. The derelict room Dylan finds himself in is filled with the grotesque corpses of drug addicts. The face of a woman melts revealing one of Dylan’s tormentors. “I love you, Dylan. You’re brilliant. Those other muppets. They just bend over and receive our majesty.”

And when Dylan refuses again to be a supplicant, the “representative of the ordinary” arrives with racist thugs. Dylan is commanded to look out the window and see the price of non-compliance: poor, innocent people are bashed and killed, and the horror creature drives a truck full of explosives into an apartment block. If Dylan will not obey, it seems, then the most vulnerable in society will die.

But the plan backfires. Dylan is seen on television selfishly trying to rescue victims of the explosion at the risk of his own safety, leading to his hospitalisation. Dylan’s popularity skyrockets. Even Ian and Alexander are set back on their heels. Another plan is formed to counter Dylan’s high-standing: at a reception at Buckingham Palace, Dylan is ambushed by a member of the Annunki, occupying the form of a young and pretty duchess, a member of the Royal Family. Dylan punches the lizard man. And to the other people at the reception, it looks like he has assaulted the duchess and is completely out of control.

Possibly the most intriguing aspect of this title (and one we suspect Mr Horry might not have intended) is the difference between the relaxed, smart, and highly effective bureaucracy (manifesting in two of the supporting characters, office manager Beth McKewon and Dylan’s political advisor Fenella) compared to the ambition of the politicians. Clever characters lead to clever dialogue: “The indulgence of people like him makes me want to quit politics.”

In the background, other forces are at play. A mysterious woman watches Dylan in the first issue. In the second issue, she is confronted by one of the white-suited men as she feeds swans in Hyde Park.

Man: “I’ve been taken from other duties to… serve notice. Do you think you’d go unseen yesterday? Watching over our new prime minister.”
Woman: “Ain’t no rules for being nosey, fucko.”

There is reference to a “truce”, which given the brazen control of British society by the men in white and the Annunki feels more like a surrender. A similar encounter between the women and the men in white occurs in the third issue.

Lizard Men is vaguely reminiscent of Neil Gaiman’s The Sandman #54, and the relationship between teen US president Prez Rickard and the sorcery of Boss Smiley, who describes himself as the secret Prince of that world. The secret by which Dylan will defeat the secret rulers of England, we suspect, is one of moral fibre – a pointed message to the politics of compromise. This is a thoroughly intriguing title.