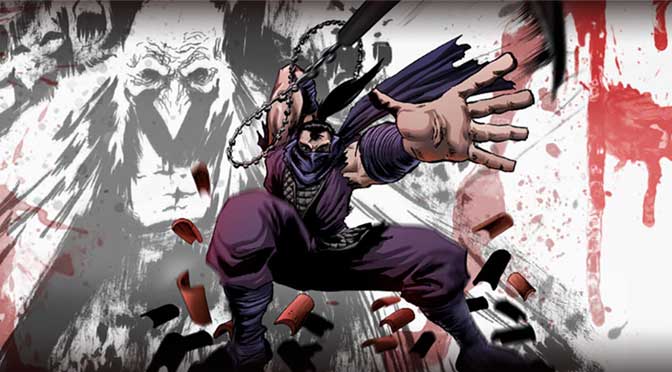 Writing historical fiction can be difficult, and particularly when dealing with a place which has a different language and culture from that of the writer. This title is set in sixteenth century Kyoto. As far as historical accuracy goes, this comic does not capture it, with its improbably green-eyed heroes sporting long Dragonball-esque pony-tails instead of chonmage (the traditional topknot worn by Japanese fighters in the Edo period). If this issue has any significant flaw, it is that the writer, Mark London (who we assume like the publisher, Mad Cave Studios, is based in Florida), did not take more care to ground the story in medieval Kyoto by reference to landmarks which exist to this day, like Kamigamo-jinja Shrine.

But it is clear that the story is not intended to be an historical exploration of feudal Japan: visions of vulture demons haunt the protagonist, casting this title as a melange of fantasy, horror and adventure.

The plot is concerned with Genshi, a trainee ninja. Sixteen years ago, Genshi’s family were the victims of a brutal ambush. Just as the leader of the brigands ordered his men to kill those who resist, Genshi watched as his defenceless mother was without warning run through by a sword. A lost and scared survivor of the attack, Genshi was adopted as a very young boy into the Iga clan, lead by Lord Haruki.

Genshi is then trained as a fighter. The discipline is tough: full-contact combat, tested for endurance by being poised in a freezing waterfall doing the splits, fending off an attack by arrows and shuriken with swordplay. Genshi is clearly adept: he springs from lily pad to lily pad at one point, demonstrating the skills of a master ninja. All of this is overshadowed by Genshi’s nightmares, which Genshi’s roommate and Lady Akemi put down to stress.

Genshi’s teacher, Nichiro, delights in Genshi’s prowess. “One more test and he will prove worthy. I, Nichiro, am proud of my student”. But in the panel where this monologue appears, in the shadows leans forward the demon’s crab-claw profile. Could it be that Nichiro is both Genshi’s teacher and tormentor?

Genshi is Lady Akemi’s secret lover, and because of their class difference he fears for his life even as he wants her. Lady Akemi is slightly more brazen and admits that she loves Genshi (and it must be said at this point the conversation between the lovers is stilted and wooden – there is no real intimacy between the two other than a passionate kiss). But Genshi’s dreams of being dragged into a hellish pit by a bloodied devil forces him away from her. And then during a later assessment of Genshi’s skills, Genshi’s eyes blaze with a crimson inner light: Genshi is suddenly possessed and nearly kills Nichiro, almost certainly dispelling our theory that Nichiro is responsible for Genshi’s torment.

A rival clan, the Koga, lead by the fierce Lady Yua, sit on the horizon like a dark cloud, threatening the stability of the Iga clan by way of cattle theft, territorial disputes, and an imminent assault. And just as Genshi is promoted, Lord Haruki, fearing an attack by the Koga, requires that Nichiro procure Genshi’s death. Haruki’s motivation for this remains for the next issue.

We speculate that Genshi’s family were killed on the orders of Lord Haruki. And we wonder whether Genshi will end up being the lost son of a nobleman of the Koga clan, and that as a nobleman he will be entitled to marry Lady Akemi and seal the rift between the two houses, bringing the story to a Shakespearian ending. None of that explains the demon bird, which mystically bars Genshi from killing himself in the opening pages.

Perhaps the most engaging aspect to this title is that Mr London has impeccable timing in execution. The initial hook – a skirmish, Genshi’s failed suicide, the mocking haunting by voices, and the intervention of the demon spirit – is genuinely engaging. The twists – Genshi’s affair with Akemi, the nightmare of Lady Haruki offering to kiss Genshi, Lord Haruki’s orders to assassinate Genshi as the Koga army approaches – are unforeseen and executed with finesse. The humour of the sexual mercies of a one-eyed crony is harsh but amusing. Only the dialogue needs polish, and even then, there are still some sly lines laden with tension: “You feel disappointed and that’s on you,” says the ghostly voice haunting Genshi as he battles for his life, and after Genshi fruitlessly thrusts his sword through his heart, “Are we done?” We witness Genshi lying on his side with a sword protruding from his back. “I decide your fate!” screams the demon as it looms over Genshi, preventing him from dying.

Given the quality of the plot and execution of this first issue, we are a little surprised we have not heard of Mr London before. Once he has some years of honing under his belt, especially around dialogue, we do not doubt that Mr London will become a better-known name.