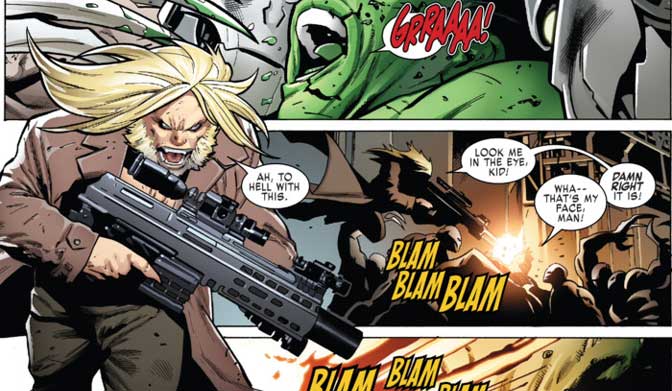 Reading these two comics, it is remarkable how entirely different creative outputs, measured by quality, can have the same authorial source. Both issues are written by Jason Pak, and both are published by American purveyor of superhero titles, Marvel Comics.

Weapon X #18 continues the adventures of a ragtag team of characters of, at best, dubious moral fibre, all extracted from that very large and ever-growing Christmas stocking of Marvel Comics’ superpowered mutant characters known the X-Men. Like all Christmas stockings, the contents are variable in both quality and age appropriateness.

The Good, the Bad, and the Tentacled

At one end we have Old Man Logan, an alternate universe, and very weathered, version of Marvel Comics’ evergreen superhero Wolverine. This character’s backstory is fascinating: tricked into killing the entire roster of the X-Men, he is a broken man working a dusty farm with his wife and two children, periodically beaten by the bullying children of the giant green monster called the Hulk. Various unhappy adventures drag him from the depths of depression and back to his semi-psychotic self. And in one of Marvel Comics’ too regular multi-title cosmic events, Old Man Logan finds himself in Marvel Comics’ baseline continuity.

At the other end of the roster we have a dreary, gun-wielding mercenary named Domino, which for most of her existence was little more than a leather-clad one-dimensional love interest to a mutant superhero named Cable. In between, we have a dour Native American strong man called Warpath which serves as the team’s conscience, and then three of Wolverine’s most fearsome enemies:

a. the ferocious brawler Sabretooth;

b. the Japanese cyborg assassin Lady Deathstrike; and

Mr Pak appears to be intent on clumsily hammering together a replica of a popular concept published by its main competitor DC Comics. Suicide Squad, a comic book title made into a fairly popular motion picture of the same name, has a cast of villains coerced into performing good deeds. Team Weapon X, as the characters of Weapon X are called, are for the most part a similarly murderous bunch operating as a team for altruistic purposes.

But the concept of Lady Deathstrike and Omega Red in particular, the first entirely callous to murder, the second regarding sentient beings as food, participating in a superhero team without forcible coercion goes against the grain of decades-long characterisation.

Weapon H #1 on the other hand is a respectably well-written title. A military contractor who stopped a genocide of villagers is experimented upon, and given the powers of both the massively strong Hulk, and the unbreakable blades and skeleton of Wolverine. The main character, named Clay, also has Wolverine’s super fast healing powers, entirely preventing him from peeling off his fingertips with a knife.

The gruesome effort to remove his fingerprints is part of an effort to hide far, far away from his family, who think Clay is dead. For his part, Clay thinks his family will be in danger if Clay’s existence and extraordinary power set is discovered.

The first half of the issue follows Clay as he traverses further and further into the Yukon. Clay, like most superheroes on the lam, attracts trouble, this time in the form of the evil Roxxon Corporation. Roxxon revive an Alaskan demon called the Wendigo. Clay transforms into Weapon H to defend an innocent scientist who would otherwise be eviscerated by the Wendigo. The end of the first half of the issue foreshadows a future appearance by Marvel Comics’ popular sorcerer, Dr Strange.

The second half of the issue looks at Clay’s family, who are struggling to obtain benefits after Clay’s apparent death. There is a poignant moment: when Clay’s wife stops their two children from play sword fighting in which they destroy a lamp, she asks them, irritated, who taught them to fight with such impetuousness. “Daddy,” they reply. This is adroitly done by Mr Pak. Clay’s young children are orphans, and they remember the fun they had with their father.

The characterisation in this issue is strong. Clay struggles to contain his inner monster through a mantra: “Empty your mind. Head down.” Clay is a likeable character. He saves the Roxxon team from starvation, and telephones their location to the local police when it appears that they are in danger. He defends a group of homeless contractors from a truckload of rednecks. His run into the snow is motivated by a desire to protect his family.

Thus we conclude that Team Weapon X is too much like Suicide Squad. And recently we reviewed Damage #1, published by DC Comics. The title character, we noted, is too much like the Hulk. Yet Weapon H is very much like Damage. Thus we wander about the bizarre funhouse of the American comic book industry.