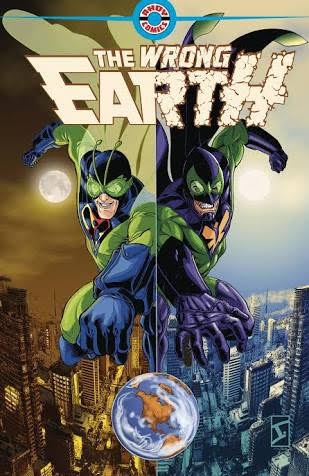 The Wrong Earth is an exercise in contrast, pitting sunshine superheroics against the “grim ‘n’ gritty” redefinition. Here, we have as a protagonist a thinly veiled version of Batman. The character exists in two different realities: Earth Alpha, in which all is bright and fun (drawing upon the themes of the camp or at least psychedelically kitsch Batman television series produced from 1966 to 1968 starring recently deceased actor Adam West), and on Earth Omega, a bleak and brutal reality of corrupt cops and broken bones. Earth Omega epitomises the Frank Miller ethic: Earth Alpha, the Adam West ethic.

On Earth Alpha the protagonist is called Dragonflyman, and engages in acrobatic fist fights with mild, lukewarm evildoers. Dragonflyman is accompanied by his boy sidekick, the Stinger, and the two make jokes while foiling bad guys. The sound effects include the word “bash!”, and stars fly out of the villains’ faces when they are struck.

On Earh Omega, the protagonist is called Dragonfly. Our first exposure to this incarnation is to witness him – in the rain on a moonlit night, naturally – being beaten by a mob of thugs armed with baseball bats, blood splattering, he incinerates them all without hesitation. The only thing missing is a menacing pose on a gargoyle. Dragonfly’s sidekick appears to have died years ago, a reference to the notorious telephone poll of September 1988 when Batman’s sidekick Robin was beaten to death by the Joker in the storyline, “A Death in the Family.”

The two universes therefore represent the superhero genre before and after Mr Miller’s The Dark Knight Returns. The difference is stark. It reminds us that the liberal ideals of the late 1960s were very far away from the socially and financially conservative Reagan Era of the 1980s.

Through a Glass, Darkly

The two change universes through the mechanism of a magic mirror. Both Dragonflyman and Dragonfly run through the mirror while chasing their adversary, called Number One. The twinned universes are a nod to a longstanding superhero convention, that of many parallel dimensions, whereby characters who could not cohabitate for whatever reason can nonetheless meet on an intermittent basis.

In The Dark Knight Returns, the Joker repeatedly stabs Batman in the abdomen during their final brawl. We are drawn back to that moment of horror when the Earth Omega version of The One steps through the mirror and, picking up a jagged piece of glass, stabs The Stinger in the stomach. The One’s Earth Alpha moll, Deuce, is plainly horrified. And when Dragonfly sees the Stinger wounded but alive, he is plainly baffled.

There are two back-up features:

1. A story written by Paul Constant involving just The Stinger, at a fun fair. The Stinger is duped into revealing his secret identity to a bad guy, who is subsequently torn to shreds by an orang-utan. The ending is kitsch: the story is ostensibly a 1940s newspaper comic for sub-teens in a more innocent age.

2. Another kitsch tale, pitched as a boys’ 1950s adventure story of “Hud” Hornet, this time written by acclaimed Scottish writer Grant Morrison, as a text rather than a comic.

Some of the dialogue is laugh-out loud funny: “Dragonflyman knew an egomaniac like you would never obey municipal building codes!” The writer, Tom Peyer, is a long time scribe with an impressive resume for DC Comics, and at Ahoy Comics he has the ability to indulge in things that interest him without editorial inhibition. This title will interest many of his loyal readers, and also other fans interested in the pith and marrow of American superhero comics.