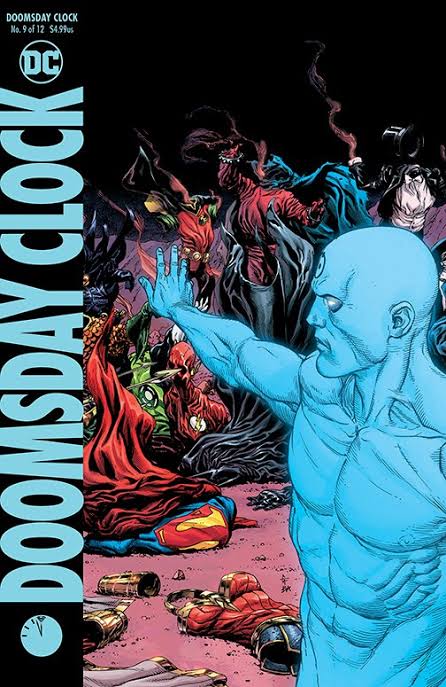 Over a year ago, we discussed whether re-writing Watchmen is a cardinal sin. We concluded that if one is to sin, then one should do it well and enjoy it. Mr Johns is clearly enjoying himself and, to our surprise, in reading Doomsday Clock, we are too.

The War to End All Life

Mr Johns has over the past two issues shifted the title from a strange mystery into a superhero version of the prelude to World War One. Murder, betrayal, nationalism, conspiracy, rivalry, insanity, and manipulation are hidden within the many folds of the cloak of Doomsday Clock’s plot. It just happens to also be draped with superheroes.

Perhaps “draped” is not the correct metaphor. “Drenched” is more apt. Mr Johns seeks to delight DC Comics’ core of readers by recovering from obscurity some abandoned characters. Some of these, such as Gail Simone’s wonderfully creative Black Alice, and Steve Ditko’s bizarre character The Creeper, are entirely worthy of being dredged up. Others, such as The Atomic Knight and Firehawk, perhaps would have been better left on the seabed. Superman and Batman, of course, feature prominently.

Dr Manhattan, one of the main protagonists of Watchmen, is literally the deux ex machina of this story. Dr Manhattan is capable of teleportation and can see the future as an inevitability he cannot disrupt.

Dr Manhattan is using the Earth and its superhero history as a laboratory: he plays and tweaks with outcomes. The planet’s superheroes band together as they always do, and, conveyed by  a motley fleet of starships, travel to Dr Manhattan’s crystalline home on Mars. They are, as ever, grim but sure of success.

As he carves through the ranks of the superheroes in some explosive action scenes, we are caused to wonder where Dr Manhattan and Mr Johns begin and end. Mr Johns as writer compels the characters to fight and be defeated by Dr Manhattan: Dr Manhattan knows the outcome of the battle. Dr Manhattan has extinguished some of Earth’s heroes – his interference in the past erased the Justice Society of America, a group of superheroes dating back to World War Two – and Mr Johns has brought others back to prominence. Is Mr Johns Dr Manhattan? Mr Johns puts the words in Dr Manhattan’s mouth and causes him to act, and Dr Manhattan knows the details and outcome of Mr Johns’ story. There is a little of Scottish comic book writer Grant Morrison’s modernism in the title – a loop between writer and character, most famously seen in Mr Morrison’s acclaimed Animal Man.

That is not the only nod to past works. When first Firestorm and then Captain Atom pierce the skin of Dr Manhattan, we are reminded of Mark Waid’s work on Kingdom Come. The irony of Captain Atom attacking Dr Manhattan should not be lost on anyone who is familiar with Watchmen: Dr Manhattan replaced Captain Atom in Alan Moore’s script when DC Comics decided that they did not want the newly acquired Charleston group of characters to be the subject of a very adult adventure. In Kingdom Come, it is Captain Atom who is cracked open to cataclysmic effect, his death heralding the superhero apocalypse.

(The issue itself is entitled “Crisis”, a reference to the myriad “Crisis” epic events published by DC Comics every other year in which the universe – and sometimes the multiverse – faces some sort of cosmic threat of another.)

Otherwise, the issue is well-tapped into the current global zeitgeist. Geopolitical tension and instability, Russian ascendency steered by Vladimir Putin (a subject we have touched on before), even an off-panel tweet from an anonymous President of the United States vaingloriously and falsely noting that he had done more for America than Superman: these are indicia of our times. Comics have always been mirrors of global events – every superhero created before or during World War Two superhero was deployed within their respective titles against the Axis powers.

The angst of the various players are exponentially escalating, again suggesting the inevitability in the prelude to World War One. This title is called Doomsday Clock after the symbolic warning from the members of the Bulletin of Atomic Scientists about the likelihood of apocalypse. In January 2018, the Clock was brought forward to two minutes to midnight. We hope that Mr Johns’ work does not mirror reality too closely.