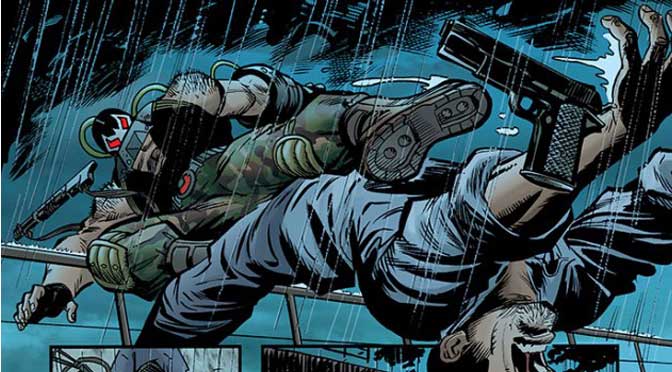 “Bane: Conquest” is a new comic book maxi-series from American publisher DC Comics. The title focuses on the villain “Bane,” who is a regular adversary of DC’s popular Batman character. Bane is notable for being one of the catalyst of the now notorious “Knightfall” storyline (1993) that saw Batman being crippled and temporarily replaced. Bane was responsible for Batman’s injury.

The plot of “Bane: Conquest” is not unique or special. The story drops readers in the middle of a scenario where Bane and his henchmen have intercepted a shipment of spent plutonium warheads bound for Gotham. Much of Bane’s backstory and fairly complex character will be lost on new readers, as there is very little setup. The story just goes straight to the action with no preamble. Some dialogue fills out the character’s motivation: Bane treats Gotham as his territory, and will attack anything that would sow discord on his city without his express permission. There is no altruism in Bane’s character, but instead only imperial self-interest.

The first issue is unfortunately mediocre, an unfortunate outcome for a writer of Chuck Dixon’s experience. Bane goes through the motions of tracking down the enemy. While the character has always been written to be on par with the Batman in strategy, this deep-thinking is not showcased in this story. Bane punches everything on his way to the mastermind behind the shipment of weapons. All of the detective work is left to his henchmen, and all of this potentially intriguing puzzle-solving is done off-panel. The story does pick up a little in the second issue. This is because of a couple of major plot developments: first is the introduction of the enemy, named Damocles, and the appearance of Batman’s alter ego (and, in so far as DC Comics’ titles are concerned, omnipresent) Bruce Wayne.

Damocles is not engaging nor intriguing, notwithstanding the feat within this title of defeating and capturing both Bane and Batman. Batman observes that the villain has chosen to name himself after the central figure in the antiquarian “Sword of Damocles” parable. For those not in the know, this is concerned with a man who, envious of the power and benefits of being king, sits on the throne of King Dionysius and is afforded the luxuries befitting a king, but must contend with the ever-present danger of a sword hanging above the throne and held only by a single strand of hair from a horse’s tail. Thus, being king comes with the ever-present danger of assassination and usurpation. Batman, in a remarkable chain of logic, assumes the name must mean that Damocles is second-in-command, and that someone else is pulling the strings from behind the shadows. Thus, the antagonist’s code name unlocks the mystery. If only all crime could be solved by clues hidden in self-adopted nomenclature. It is silly stuff.

A saving grace of “Bane: Conquest” is the long-curious relationship dynamic between Bane and The Batman. This is illuminated in the second issue. As expected of two adversaries who have literally crippled and sent each other to the hospital on separate occasions, Batman and Bane hate each other (in one very odd storyline, Bane was a candidate as Batman’s half-brother, adding a very Antigonean bent to their relationship). But, within the Batman mythos, Bane has frequently alternated between villain and vigilante. The two will grudgingly work together if it benefits them. This is a break from the incessant brawls that usually occur between different comic book characters, often for flimsy reasons, but driven by appeasement to the audience. Bane and Batman, in this regard, show practical intelligence by avoiding a cliched macho fistfight, even though each have ample reason and motivation. The two characters make it clear that they are still going to punch each other after escaping from captivity. But punching Damocles and escaping is the more pressing priority.

We chose to review the two issues at the same time because the first issue alone would warrant a strongly negative review. It entirely fails to engage a reader who is not already heavily invested in the Bane character. But the second issue at least partially redeems the story by adding texture and tightening the narrative. The story now looks like its getting somewhere. This is one of those comic books that would probably read better in collected format.