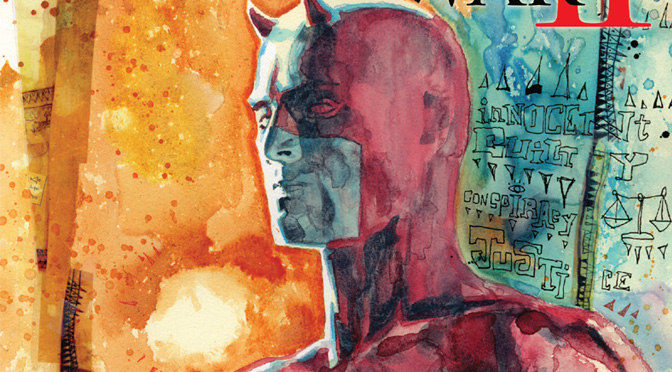 “The Accused” is a standalone tie-in to American publisher Marvel Comic’s annual crossover event, this year entitled “Civil War II”. This cross-promotional publication event is, in essence, a marketing ploy to encourage readers of Marvel Comics to buy additional titles, as a consequence of being introduced to those characters through the tie-in.

In this event, Marvel Comics’ major characters are being divided over what to do with a new character that has the ability to predict the future. One side chooses to exploit the character’s gift by being proactive (apprehending criminals before crime is committed). The other side considers a reactive approach to be more ethical. Marvel Comics has actively explored the consequences of time travel in recent years, in both “The Avengers” and the “Uncanny X-men” titles, and in many ways this concept is an extension of considering the Butterfly Effect upon its continuity.

“The Accused” deals with the fallout to one of the events that kickstarted the divide among Marvel Comics’ superheroes. One of Marvel Comics’ lead characters is called The Hulk. The Hulk is an enormous green behemoth with superhuman strength which from time to time is depicted more as an uncontrollable force of nature rather than a superhero. Both factions pay the Hulk’s alter ego Bruce Banner a visit after the precognitive character foresees that Banner will revert to the savage, mindless Hulk, and thereafter kill numerous humans and superhumans in his rage. This situation ended dramatically, with the marksman Clint Barton (a superhero also known as Hawkeye) killing Bruce Banner. A permanent disposal of such an important character seems unlikely, but this does not mitigate the sensationalism of the plot.

The comic delves into the resulting legal proceedings after Clint Barton has been accused of murder, with Daredevil’s alter ego, the blind lawyer Matt Murdock, serving as the prosecutor.

This reviewer has no qualifications with regard to assessing whether the court proceedings in the comic are an accurate representation of US criminal litigation, but it is still a welcome break from the usual superhero fisticuffs. The majority of the pages is spent on tackling both Hawkeye’s and Murdock’s respective motivations, in committing the murder on the one hand, and the desire to see a professional colleague sentenced to lethal injection on the other.

Along the way, there is a mystery to be solved (which gives Murdock an excuse to don his costume and do some sleuthing as the Daredevil). This mystery ties in to “Civil War II”’s main plot. It evolves that there are antagonists who have stacked the odds against Clint Barton, so as to make the character an example and thereby an excuse for passing yet another Superhuman Registration Act.

Longtime Marvel Comics’ readers will be familiar with the Superhuman Registration Act as the cause of the first “Civil War” event. This piece of fictional legislation involves the US federal government requiring all super humans (and well-trained individuals who fight crime) to register and work under their supervision, and, in a draconian way, arresting and imprisoning the non-compliant.

The main conflict in “The Accused” crystalizes with Matt Murdock. Murdock finds himself torn between letting a murderer go unpunished, or seeing justice served, even though the latter comes at the cost of yet another Superhuman Registration Act being passed.

Additionally, Murdock’s ego comes into play – the lawyer finds it distasteful that the case is being manipulated. In the end, Murdock chooses the path of professional ethics, which is to ensure that Hawkeye gets a fair trial and to let the proceedings play out normally.

While “The Accused” suffers from the need for knowledge of prior events and characters, it is a standalone story that makes an effort to explain minor back-plots through flashbacked vignettes. It is not enough for someone who is completely new to Marvel Comics’ body of work, but should be enough for someone who is not updated with current comic book storylines yet familiar with the characters.

For readers who do not require a refresher, “The Accused” is a well-written story that shows a side of Marvel Comics’ superheroes which has rarely been tackled. There are also details that add texture to the story, such as Murdock not being able to gather evidence due to all relevant documents being saved only in digital form, or a briefcase being banned during a pre-trial meeting because its contents can be weaponised by Clint Barton.

One-shot tie-ins to major crossover events tend to be largely inconsequential, usually containing stories that play off on the main title’s story but can be safely ignored without missing a huge chunk of the narrative. “Civil War II – The Accused” is one of the welcome exceptions to this rule.