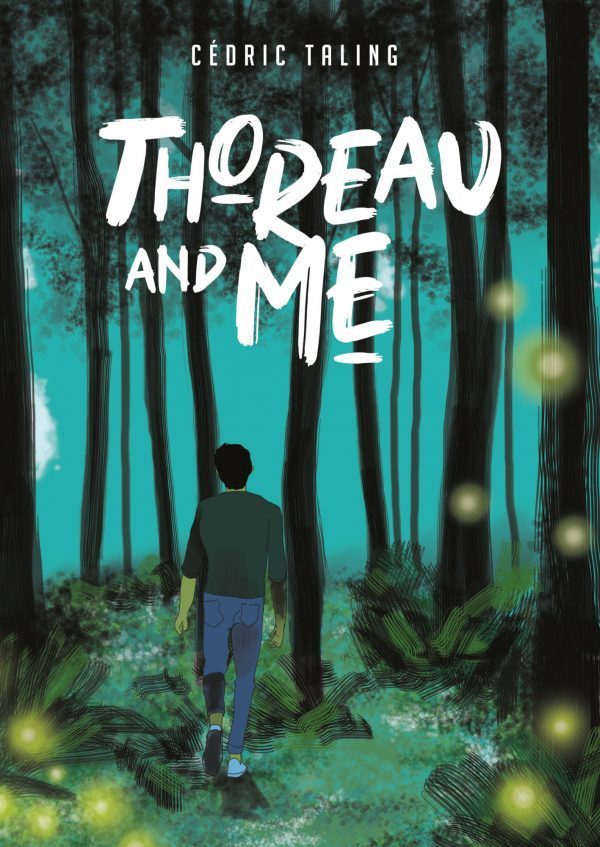 For those middle-aged men who worry about the impact of global environmental degradation upon their ability to fend for their families (like the writer), casually reading up on what was once regarded as ultra-paranoid activities like prepping seems to have become de rigeur. Recently, fear of calamity had had interesting repercussions. In many Western cities as the pandemic shutdown kicked in, for example, live chicken sales went through the roof, as people decided that a ready supply of fresh eggs were one way of living through a collapse of the global food and water supply chain.

This title, Thoreau and Me, translated from the French, both written and drawn by Cédric Taling, will resonate with many readers. An artist, Cédric (we assume this story at least partially autobiographical), worries about climate change to the extent that he goes out and spends a small fortune on survival gear from a camping store – only to have his wife make him take it all back for a refund. He reads up on compostable toilets and is acutely conscious that his career as a successful painter is useless in a post-apocalyptic world.

Cédric is also haunted by the ghost of Henry David Thoreau. Mr Thoreau was an American philosopher who (like others) tapped into a nostalgia for primitivism as the industrial revolution’s cultural disruptions across particularly North America and Western Europe became obvious. “Back to nature” ideologies are common in millennial eras, as people fret about the passage of time. Mr Thoreau’s beautiful prose caught on with the wistful and nostalgic for simpler times. Mr Thoreau manifests in this title as an elf in an 18th century suit, capable of changing shape into various animals. Mr Thoreau was famous for his long nose, which Mr Taling exaggerates. And so there is something quite folklorish about Mr Thoreau’s depiction in this comic (which we think would have startled Mr Thoreau). At one stage Mr Thoreau even appears as a fairy, in a discussion about the corruptive influences of mass consumerism:

The copy for the title reads as follows:

Cédric, a forty-something painter living in Paris, has begun to question his life choices. Surrounded by uncertainty – and worse, despair – in the face of mass consumerism and climate change, he discusses his plight with the spirit of Henry David Thoreau, proto-environmentalist and author of Walden; or, Life in the Woods. Although almost two centuries separate the men, their viewpoints show the striking parallels between the commercialism of the 19th century and the capitalist alienation of today. Inspired by Thoreau’s return to nature, Cédric begins dreaming of his own retreat from urban life.
Timely and original, Thoreau and Me explores the causes and consequences of today’s climate breakdown. Blending humour, philosophy and fiction at a time of unprecedented ecological and financial stress, Taling explores how we can learn to live with and respond to our own anxieties.

Somewhat more than peppered throughout the dialogue are quotes from Mr Thoreau’s body of work. Mr Thoreau’s original text is distinguished by the use of spiked speech bubbles: Mr Taling’s original dialogue for the character uses ordinary rounded speech bubbles. We can see this in effect in the extract below – Mr Thoreau seems somewhat disapproving of Cédric’s line of business:

By the end of the title, Cédric and his family (even his cranky teens) have escaped to the country, and discover that even erecting a wooden beam is tricky. No doubt most of us living in big cities would suffer the same problem.

Mr Thoreau urges us to live in the moment, to veer away from consumerism, to enjoy nature. Mr Taling’s message, it seems to us, is that there is much in Mr Thoreau’s works and line of thinking that we have forgotten, and which has an immediate relevance to us today.

Mr Taling’s art is striking and fluid. He catches Cédric’s manic concern through exaggerated facial expressions. Perhaps best are Mr Taling’s scenes with multiple characters interacting – the perspectives give the reader a sense of immediacy, of also sitting at the table or standing in the art gallery.

This comic is thoroughly entertaining. It is also very contemporary, not despite Mr Thoreau’s continuous appearances, but because of them. If you are despairing of 2020 and wonder if we are on the cusp of an ecological dystopia, then read this title and learn that, first, the same thinking has been around for 170 years, and second, that you are not alone.