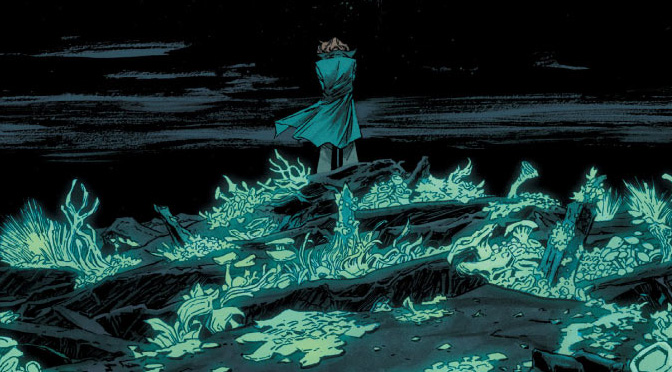 British writer Warren Ellis has been intensely prolific over the past year, penning the following titles:

“Injection” is the latest from Mr Ellis, and it consists of his trade mark dense concepts and dry wit. But Mr Ellis is treading on old ground in other ways, too.

If you were to squint long enough, “Injection” is a blurred, fuzzy, contemporary and bleaker version of Mr Ellis’ wondrous title, “Planetary” (1998-2009, Wildstorm Comics). In “Planetary”, three (and sometimes four) archeologists explore mysteries each of which have a core in popular culture. These range from pulp heroes from the 1930s to Japanese monster movies to American and English superheroes.

“Injection” is different in the sense that the authorial exploration is instead of a much richer vein. We deliberately describe Mr Ellis as a “British” writer because this title has deep ties to British folklore and myths. One of the characters, Robin Morel, is described (but denies being) a “Cunning Man”, a benevolent British shaman or Druid, and so is a practitioner of folk magic.

Cunning folk were a feature of Cornish, Welsh and other southern English village cultures. Wiccan subculture is a contemporary remnant. Morel communes with the land and walks its ancient paths. The folklore, myths and legends of ancient Britain are not at all explored in American comic books outside of the Camelot mythos and Vertigo Comics’ horror series “Hellblazer”, and so in that regard Mr Ellis delves into virgin, fertile ground.

One wonders about the autobiographical elements of this. Has Mr Ellis formed the view that, like his countryman Alan Moore, that he is a shamanic storyteller for the British people? And why not: as he himself has recognised, Mr Ellis’ formidable storytelling talents are wasted in the cultural cul-de-sac of American superhero comic books.

The balance of the characters might look vaguely familiar:

a. Most obvious of these is the Secret Intelligence Service agent, Simeon, who in physical appearance and deadly skills is a dead ringer for Nathan Kane, the highly capable lead character in Mr Ellis’ science fiction graphic novel, “Ocean” (2004-2005, Wildstorm Comics).

b. The leader of the pack, Professor Maria Kilbride, is the guardian at the gate, who has been grimly responsible for murdering ghastly threats to humanity – in one incident, by beating a heavily jawed creature to death with a hammer. This character is broadly reminiscent of Elijah Snow, the leader of “Planetary”, and who was depicted as both uncovering but also neutralising secrets threatening the world. Kilbride is parked in a psychiatric hospital, a victim of her role, and is occasionally unleashed by her British government handlers from the Orwellian-sounding “Cultural Cross-Contamination Unit” of the “Ministry of Time and Measurement”.

c. A flaky IT genius, Brigid, who turns on and off national defence systems through ennui, has similar skills to The Drummer, another character in “Planetary”.

Notwithstanding (or perhaps because of) that use of these archetypes, this comic is a captivating work. One of the striking elements to the plot is that the assemblage of characters – which also include a billionaire detective named Vivek Headland, a weedy genius rather than a Nietzschean Batman or “Simon Specter” (the later being another creation of Mr Ellis’) – who have intentionally used an inhuman artificial intelligence as a footpad for myth – or perhaps the other way around. In doing so, they have caused a slow-burning catastrophe, sentient malice as the accelerant. This is the Injection.

There are a number of disturbing moments in the book: a scene where the artificial intelligence anatomically hijacks a young programmer as a hideous interface to talk to Brigid: her response is to set fire to the boy and his computer. Kilbride wrestles with another man who is possessed by “pixies” manifesting as vegetation and fungus, and is required to skin him in order to release him from captivity.

The title encapsulates a number of themes: the decayed, magical foundations of culture; the weaponisation of myth; the perils of artificial intelligence; that the answers to the present lie in the lessons of the past.

The lines between fantasy, horror, espionage, and science fiction are entirely blurred. It takes some writing genius to do so with finesse, and Mr Ellis again in this title demonstrates that he has that in abundance.