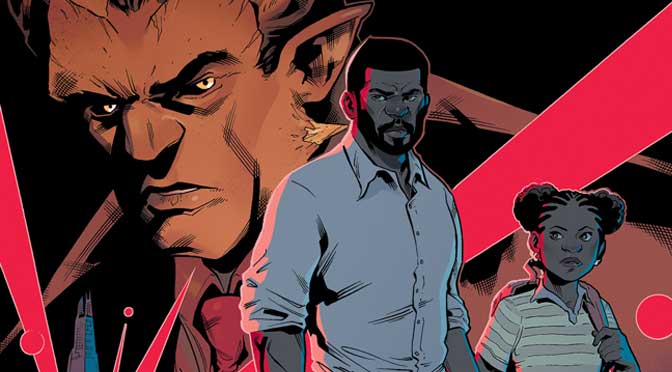 Among its American contemporaries, as we have previously noted, publisher IDW Comics specializes in adaptations from other media, particularly existing television series. The IDW website showcases their TV properties under the “Most Popular” section, which includes comic versions of “Star Trek”, “GI Joe”, and “The X-Files”, among many others. In most cases, these adaptations continue the original show’s narrative arcs and serial stories.

Though not based on an existing property, “Darkness Visible”, a new series from IDW, has the same indicia of a mainstream media franchise. It reads like the pilot for a television series. It is reasonable to assume that an adaptation of some kind is part of the plan. The series, after all, is co-written by Arvind Ethan David, an executive producer on BBC America’s “Dirk Gently’s Holistic Detective Agency”. Along with producing the show, Mr David is also a writer on IDW’s comic adaptation of “Dirk Gently”. In “Darkness Visible”, he is joined by Mike Carey, the writer behind “Lucifer” and “The Unwritten”. (We should note that two of the staff at World Comic Book Review once interacted with Mr Carey socially, albeit online.)

Together, the two writers introduce the world of this new series, where humans coexist with the Shaitan, demon-like beings who crossed over from another realm eighty years prior to the series’ events. Though the two races have had to live together, tensions remain high. Protestors are seen carrying signs that read “Skinwalkers Go Home”, referring to humans who have allowed themselves to be possessed for strength and immortality at the cost of their humanity.

In this society, many of the demons are marginalized, while others form violent criminal networks.

Detective Daniel Aston attempts to keep the peace as a member of Cyclops, a division of London Police designated to patrolling the Shaitan. Daniel’s distaste for them is made clear at the outset. “Turn your back on a demon,” he tells his daughter Maggie, “you’ve only got yourself to blame.“ But when a dangerous call puts his daughter in danger, Daniel makes a deal with a criminal Shaitan to save her. To awaken a coma-laden Maggie, Daniel is forced to work with the demon inside of him and the Shaitan monarchy, all while keeping his condition as a Skinwalker secret from his Cyclops comrades.

The world and premise of “Darkness Visible” is its strongest asset. This quality particularly shines in the third issue, which takes a break from Daniel’s narrative to illustrate the Shaitan arrival to Earth in 1940. This section showcases a creative twist on world history and uses the demonic beings as a determining force in the outcome of World War II. The segment is a fun, simple take on world history, and there is a perverse joy in seeing former British Prime Minister Winston Churchill casually greet a talking skull.

In the series’ present-day, the world additionally shows promise by placing demons on the margins of society. When Maggie feels sympathy for an insect-like Shaitan begging on the streets, Daniel is adamant that he’s changed his shape to manipulate others. This section is juxtaposed against Maggie’s performance in William Shakespeare’s “The Merchant of Venice”, a play focused on the antisemitic treatment of a central character. The page showcases Shylock’s Act I speech, describing his torments, along with Portia’s later speech advocating for mercy.

When Daniel comments that Shylock “makes a great villain”, Maggie points out that he is a tragic victim. This is strong characterization. It uses a natural, ordinary moment to inform readers about how the Astons feel about their world. From here, we know Daniel is quick to prejudice the Shaitan while Maggie has reservations.

It is important to point this moment out because there’s few like it in “Darkness Visible”, and expository overwriting instead plagues these early issues. Though there is certainly many details to get through in explaining the rules of a new world, it is a problem when every conversation feels like it is working through explanation. Daniel’s meeting with a powerful Shaitan in issue #2 reinforces this problem. While the conversation provides lengthy explanation for Danny and for readers, it exists for no other reason than to explain the world. This is, regrettably, clumsy.

This is much more of a problem in Daniel’s brief conversations with his daughter. Moments that should form this core relationship are instead focus on route information about demons and possession. The result is that characterization, when it appears, often reads as abrupt and bizarrely straightforward. Maggie at one point tells readers, “I’m almost out of parents, Dad,” the bolded word informing us that Daniel is a single father.

Misfired lines like this one are pervasive in the first couple of issues, particularly in one-liners that would feel more at home in a straight-to-video action movie. “You have the right to remain silent,” Daniel says to a demon he has tased. “And crispy.” The third issue has fewer moments like this and the change of temporal setting seems to bring out the best of the dialogue thus far.

Though the writing picks up in the third issue, guest artist Livio Ramondelli’s work is noticeably jarring. Particularly, Mr Ramondelli’s coloring, well-suited for his “Transformers” and “Star Wars” comics, never quite meshes with the 1940’s setting. Regular artist Brendan Cahill, who illustrated the first two issues, is at his strongest with some of the more creative-looking demons. A woman with a monstrous face for a torso and a bodyguard with protruding tendrils are particularly standout designs.

Despite providing an interesting world, “Darkness Visible” never quite escapes the feeling of a television pitch. While adaptability certainly is not an inherent problem, the result has all the beats of a great story without ever feeling fleshed out. Though the premise has potential, the execution leaves us wanting for a series worth being invested in.