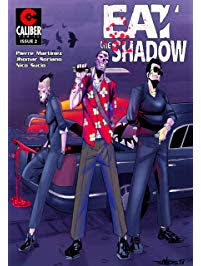 This week we focus on a batch of high quality independent titles, in fulfilment of our ethos to support independent publishers.

In August last year, we provided a very favourable review of Eat the Shadow #1. Of the triptych of stories we described in our first review, this second issue continues the last of those three stories. The two black suited men, Kenichi and Tetsuo, who we described in our last review approach a warehouse ostensibly to conclude a dead for the sale of crystal meth.

But instead they present a trap for the Yakuza boss Fukihara and his men. Working with the grumpy, Hawaiian shirt-clad hitman we saw on the bus in the first issue, the three methodologically slaughter Fukihara and his men. While the two black suited thugs open up on their opponents with assault rifles, the lead assassin quietly circles about with a machete, to gory effect. The three capture Fukihara and set him alight. There is not much happening here other than a demonstration of the ruthlessness of the assailants.

The dialogue of the second scene is very crisp. A man who we assume is the Barracuda, an overweight and disgusting crime boss, orders the death of his pretty blonde girlfriend. As she screams at him, there is a flashback to a sordid scene of her faux crucifixion and ghastly sexual torture. But the Barracuda is done with her because she cannot properly enjoy the music of Santana:

Barracuda: “And frankly, I can’t trust or tolerate someone who isn’t so deeply, so intimately swayed by the nuance, the smooth, soulful exhilarating rhythm patterns of Santana’s guitar. Even as an imperfect reproduction as this.”

Girlfriend: “What? You’re saying you’re gonna kill me for not dancing like you wanted? You’re fucking insane! You’re going to rot in hell, you twisted mother! You monster!”

The dialogue paints the villain as something a little more than an object of disgust: he tortures the girl for his sexual pleasure, yet he takes equal pleasure from the refined sounds of a guitar maestro.

There is no denying that this part of the story in particular reeks of misogyny. The flashback to the abuse of the girl is cringingly overplayed. But in this regard, the story mimics the Kansai-bred grindhouse ultraviolence of Japanese film director Takashi Miike. Eat the Shadow is within genre, deliberately disturbing without meaning to be titillating.

The writer, Pierre Martinez, then introduces a new character: Hikki. Hikki is a Suckerpunch stereotype directly drawn from the bad girl manga from titles such as Gokusen, Tokyo Crazy Paradise, and Oresama-Sensei. The Barracuda describes her as formidable: “Wayward and all, Hikki’s reputation isn’t just a fluke.” As cars race to save Fukihara, Hikki intercepts them and mows then down, mostly in melee combat. We then learn that Hikki orgasms when killing opponents up close, and she flicks her wet underwear at her peers as a reward. She is busty, pretty, and spends much of her time in panel with flared buttocks. The second chapter of the issue is a completely unadulterated mix of violence and sex.

As we noted in our last review, Eat the Shadow will not have a broad audience. But for those readers who have a love of Japanese crime manga, then this title will be happily familiar ground.

Eat the Shadow # 2 is available on Kindle.