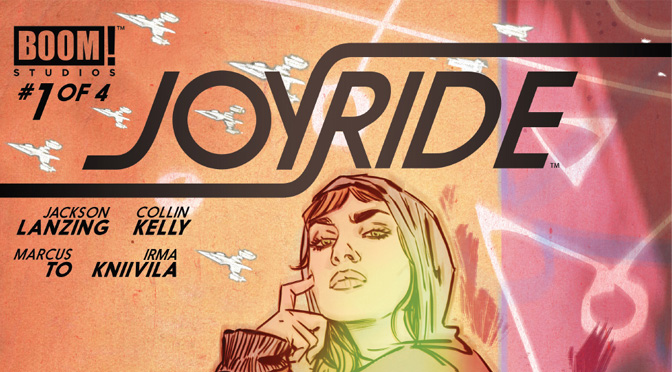 On the face of it, this title is an adolescent science fiction story, a heist, a youthful expression of defiance. It is almost shallow. But there are some shadows amidst the stardust.

A young girl named Uma convinces a boy named Dewydd to get her past the fascist gatekeepers manning a weapon on the moon which is aimed at the world. All citizens of the planet are in an Orwellian yoke where happiness and calm are mandated. Uma has made contact with an alien who has agreed to collect her and her friend from the dark side of the moon. The alien turns out to be a slaver. But she has subverted the alien’s enforcer, a black shapeshifting robot called D.Bot. The evil alien is jettisoned into space, presumably to his death, and Uma is left with the universe to explore and the means to do it. The three are actually a foursome, for there is also a fascist soldier, named Catrin, who has inadvertently joined the crew and is in the early stages of Stockholm Syndrome as a consequence of exposure to free-thinking.

It is entertaining and clearly orientated to a teen audience. But there are two subtle aspects to this comic which are worthy of consideration.

The first is that the Earth appears to be surrounded by a planetary version of a Dyson sphere. Dyson spheres are exemplary of mastery of a star system’s resources. Dyson spheres have been in the news recently.

There is a strongly utopian vision that accompanies the idea of a Dyson sphere, with the suggestion that in order to create such an enormous tool, a civilisation must have mastered itself as well as its spatial neighbourhood. Wars must have ended for a species to have enabled itself to the task of construction.

This is not the case here. The sphere is a jail for humanity, and sitting in the eye of the shell of the sphere, on the moon, is an enormous cannon. It is a gun pointed at the head of civilisation, and will be used to destroy cities which engage in dissent. Uma describes the Earth as a “world without stars”. That is a bleak vision for a fluffy post-adolescent space adventure.

The second aspect to the title which invites thought is to do with Uma and her methods. As lead character, Uma slides through each of the barriers she faces to get to the point of commanding her own starship. This is achieved with insouciance and teen cool, motivated by a desire for freedom from oppression.

But this glosses over Uma’s Machiavellian thinking. To get into space Uma manipulates the emotions of the one boy able to get her to the moon. There is no indication that they are in a relationship: indeed, he seems infatuated with her and she is happy to use that as a springboard to her goal.

And then it becomes clear that she has done the same thing, albeit with an absence of the promise of romance, to the alien metamorph. Further, she has not revealed to Dewydd that D.Bot has been turned: “I wanted to tell you,” she says to Dewydd, “I just, I wasn’t sure that you’d still say yes.” Dewydd is not a full partner in the escapade – he is a vehicle to the objective.

Uma is charming and cool and exerts every bit of that to secure her prize, in a way which suggests a ruthlessness, a lack of empathy. Will Uma thoughtlessly cast aside these people as she is finished with them? In many ways she is ideally suited to be the captain of a pirate starship.

The real story to watch in this is not the adventure and exploration, the running from authority. Nor is the story to watch the inevitable evolution of the security officer from cop to freebooter. It is instead what happens to Uma. If this story delves into that and what it means to those around Uma, then this would be a title to follow.