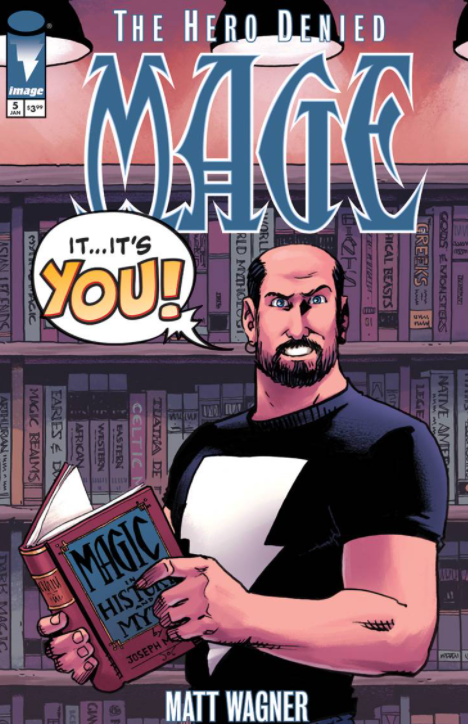 SOME SAY HE MAKES NO SENSE when he talks about magic. Yet this time I believe I get it as Kevin Matchstick explains to his son in Mage, Issue 3, how magic “kinda exists alongside what we’d call ‘our world’” as in feeling the electric universe throbbing inside our own lived experiences. In  a way the characters and challenges in the new Mage series by Matt Wagner, this round called The Hero Denied, appear to be one’s subjective-objective self turned inside out so inanimate forces get a face and a form and pose grimacing challenges. In this view, every step into consciousness and order any of us manages to achieve demands unshrinking heroism, facing in and out in the past, present and future all at once and moving.

The first fiend to find Kevin in his safe hideaway is a tiny scout, like a smudge on a book. The second pair nearly wrecks his car and threatens his son. The drama begins with the realization it is time to make a change after ten years on the run.

Mage refocuses in the present following two previous instalments in The Hero Discovered and later The Hero Defined, from two and three decades ago. Mr. Mage now has a wife and two kids. The situation half hiding, half working to reach Camelot, the dream of a big walled home-sweet-home to keep the family perfectly safe, made me think of a character in Balzac claiming he put into practice an axiom for a quiet life summed up in a Latin epigram—fuge, late, tace—meaning roughly exile, subterfuge, silence. This seemed to me an awkward recipe, better for a life of crime, or a life as a father as Kevin Matchstick portrays it, incapable of putting the family at risk.

The life of a hero seems to be just the opposite: to advance rather than retreat, embrace good, and speak out when no others dare. The Hero Denied title reflects a conflict between parenthood and heroism, between retiring, practical safety first, and magical initiative. In the first six issues, good defense and good offense get mixed up. As we know from earlier days with the glowing green bat, Kevin is inclined to be offensive.

Extirpating the malevolent is a use of force every gardener knows, pulling weeds, defeating pests, and fencing off herbivorous beasts. Kevin facing off against the Umbra Sprite herself is common as mud for mankind: Keep that deathmonger out! Our safe haven in Camelot depends upon a commandment to extirpate the malevolent within its bounds, as with a magic crock pot spreading fumes like mosquito repellent. What happens then if a higher force claims you are the malevolent creature who must pay for the crimes of past lives? This confrontation with the devil’s sophistry in Issue 4 is the one occasion (so far) that gives Kevin pause with a shadow of guilt. But he denies culpability like rich countries today saying reparations paid to all the poor people harmed in the great game of world imperialism is just not relevant. Must all the rich confess their crimes?

“It wasn’t me,” says Kevin. The judgment is more like, am I malevolent now? There is never a question that Kevin is on the side of the good guys and his savagery is directed at the right enemies, but the circle of extirpating always has the question in it, from now on, asking whether the good has gone too far or may need to repair divisions arising from the past catching up to current events.

My greatest pleasure in the Mage series arrived in Issue 5, when the place where Kevin and his family chose to take refuge to live a normal if charmed life became recognizable, just down the street from where I write this in Southeast Portland: first the familiar style house outside and inside, the driveway, the neighborhood, the rain, the school bus, and names of places on SE Belmont and SE Hawthorne, and at last a panorama view of the city of bridges with Mt. Hood overhead, all as if this is Paris and everyone needs to groove on the place. Thanks Matt Wagner and son Brennan Wagner on colors. Feels like home. Get those critters.