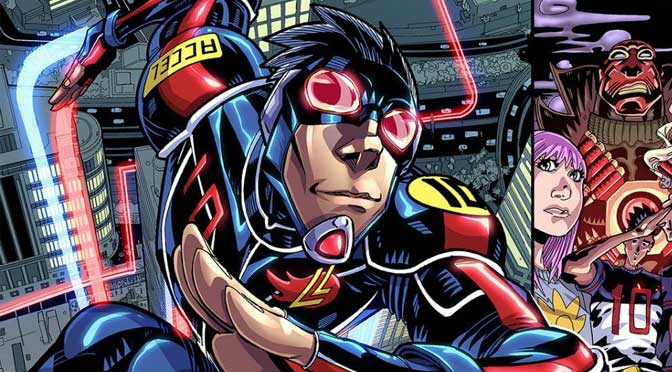 “Accell” is a new superhero comic book from American publisher Lion Forge Comics that focuses on a character named Daniel Dos Santos. As at the first issue, the character has not adopted any superhero code name, an indicia of the genre, as yet. But it is safe to assume that it will eventually be the same as the comic’s title, for Daniel Dos Santos’ inhuman ability is super speed.

The first issue serves its function well as an introduction to the character. We get to see Daniel’s life outside of the costume as the typical young adult male who enjoys videogames and spending time with his girlfriend. But we also get ample time devoted to showcasing his exploits as a relatively inexperienced, costumed superhero. In the early parts of this first issue, Daniel saves the passengers of a hijacked plane and captures the hijacker, while the latter part of the issue features a one-on-one fight with a costumed assassin – a fight which the protagonist narrowly escaped.

The comic is surprisingly efficient in its ability to set up and execute two narrative threads that would normally be enough substance for two separate issues, using both threads to expound on Daniel’s powers as well as successfully explaining what makes this new protagonist unique in a genre awash with characters who are super fast.

And as it turns out, the title addresses the science of moving very fast. The specifics of Daniel’s super speed help “Accell” stand out because unlike DC Comic’s mainstay character “The Flash,” Daniel is not inhumanly durable or strong when moving fast. He can use his abilities to generate massive amounts of force, but he is not immune to the consequences. A few minutes of super hero activity is likely to end in Daniel being hospitalized for lacerations and bone fractures. In most cases, the character is left in a comatose state for days, as he can only use his super speed to accelerate his body’s healing ability if he is conscious. This unique perspective adds a layer of depth. Characters with hyperfast abilities can beg the question: why not solve all crime and obviate natural disasters if time is not a consideration? The physical vulnerability of the character ensures that the story will not fall into the trap of solving every problem with a simple application of the protagonist’s abilities. Daniel makes savage and repeated sacrifices of his health in order to do good.

Unfortunately, despite the unique premise and the effective pacing, “Accell” is held back by problems. First of all, a cliché underpins the plot. The source of Daniel’s powers is a glowing piece of meteor that fell from space. As far as origin stories go, this one is horribly dated and well-worn even outside of the super hero genre. Our second problem with “Accell” has to do with the main villain. Daniel’s nemesis is a rich businessman, who is also the father of his girlfriend. The sole motivation for wanting the protagonist dead is that he disapproves of Daniel’s relationship with his daughter. The echoes of Sophocles’ Elektra are grating. This reads like a very cheesy daytime soap opera.

At Newsarama, reviewer C.K. Stewart says the title “brings a healthy dose of humor and youthfulness”, but says little else about the quality of the plot. This reads to us like faint praise. On the other hand, Nicolas Palmieri at Multiversity Comics outright says the first issue is a “fairly unremarkable story… this book is going to need more of a hook if it wants to build a readership.” We think instead that speed-related physics issues provides that hook, but we question the stale ancillary plot points. We can recommend this new series to readers who want a new brand to follow, but it could definitely benefit from more engaging and sophisticated side characters or subplots.