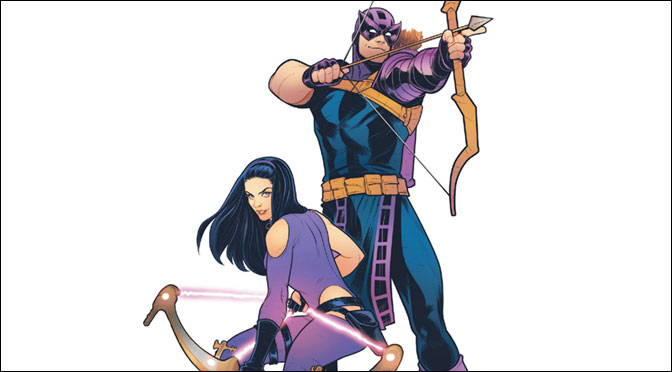 “Generations: Hawkeye & Hawkeye” is another installment in American publisher Marvel Comics’ new line of single publications that feature super heroes of the same name interacting with each other. The pairings tend to occur through the use of time travel, with the newer characters traveling back to the past in order to meet younger versions of their predecessors. This time around, it is the bow-and-arrow wielding super hero, Hawkeye, meeting a time-traveling version of his much younger protege Kate Bishop. In current issues of the regular “Hawkeye” comic, Kate Bishop is also using the “Hawkeye” name while working as a super hero and private investigator.

The time travel aspect in the “Generations” titles is employed for a utilitarian reason: some of the characters featured were from different time periods and would not have otherwise met, while the rest are already familiar with each other and bringing them together would have lacked novelty. “Generations: Hawkeye & Hawkeye” is of the latter variety. By having Kate Bishop meet a younger version of her mentor, the time travel plot driver manufactures the opportunity for the two characters to meet each other for the first time, more or less.

The premise is interesting though hardly unique. In the spirit of the medieval genre of chivalric romance, a “Battle Royal” event is being held at an undisclosed island, with the participants being the best marksmen from all over the world. As the story explains, the contest was advertised to the target audience. Those marksmen who signed up were suddenly abducted and mysteriously whisked away to the island, waking up with all of their equipment and, ominously, a new belt with a “bullseye” buckle.

The mechanics of the game is that all of the participants must try to hit the target on each other’s belt (an exercise, we think, inviting castration at the hands of the sloppier or nastier shots).The players who are successfully hit on the belt target are teleported away from the island. The winner will be the last survivor to remain. It is an elaborate scenario for a marksmen’s contest. What the organisers of the event failed to anticipate is that majority of the skilled marksmen in Marvel Comics’ continuity are super villains—all of whom dislike being manipulated as much as they dislike following rules. The end result is that the villains chose to disregard the belt and started hunting and killing each other.

Within that chaotic premise, we get to see Kate Bishop mysteriously appearing on the island and coming across her mentor. It takes some fast talking to convince this historical version of Hawkeye that Kate Bishop is to be trusted (at least temporarily), but once that is out of the way the duo decided to eliminate every single contestant using the belt mechanic, to prevent the villains from killing each other.

The main problem is that that the participants include some of the most skilled (and psychotic) marksmen villains in Marvel Comics. These include the formidable assassin Bullseye, and the mercenary Taskmaster. Both of these characters are arguably better fighters than either Hawkeye. Kate Bishop is the ace in the hole, due to being an unknown variable and not having a teleportation belt.

Along the way, the duo come across Hawkeye’s own former mentor, the villain Swordsman, and decide to work with him. Hawkeye’s distrust for his former teacher adds tension. As mentioned in our “Generations: Wolverine & All-New Wolverine” review, the time travel mechanic in most of the “Generations” titles is not explained. “Generations: Hawkeye & Hawkeye” at the very least covered this important part of the story by introducing the character Eden, who has the ability to pull people out of different timelines. This character is responsible for Kate and the participants being whisked away to the island, although the comic has not made it clear whether she is also responsible for the time travel in the other “Generations” titles or even if they are all connected. Eden is a clumsy deus ex machina character.

Writer Kelly Thompson is a veteran of the industry and we can otherwise find no fault in her efforts on this title. She brings the same kind of wit and snappy humor that has made Kate Bishop appealing to readers, and used that as a counterpoint to the young Hawkeye’s brash and outdated attitudes. While, in our view, Kate Bishop is not a mature enough character concept to bring the same kind of relation inversion that happened between the two Wolverines in “Generations: Wolverine & All-New Wolverine”, her familiarity with Hawkeye and knowledge of future events allowed her to steer conversations and efficiently head off any advances made by Hawkeye (who is repeatedly characterized as a womanizer, particularly in his younger days. In Matt Fraction’s celebrated “Hawkeye” series, any prospect of romance between the two characters is defused by the age gap and the male Hawkeye’s maturity in recognising that he should preserve the friendship, and not foul it up through yet another failed romance.)

As per our previous complaint with the “Generations” line, the comic itself, while showcasing Ms Thompson’s deft writing, has otherwise very little to work with. There is potential in the plot. But a single issue is not enough to adequately propel the story. Also, more broadly, the lack of setup for the “Generations” meet-ups make it unwieldy to non-fans. The “Generations” concept at the end of the day is but a gimmick. In this instance, the gimmick fouls up the writing.