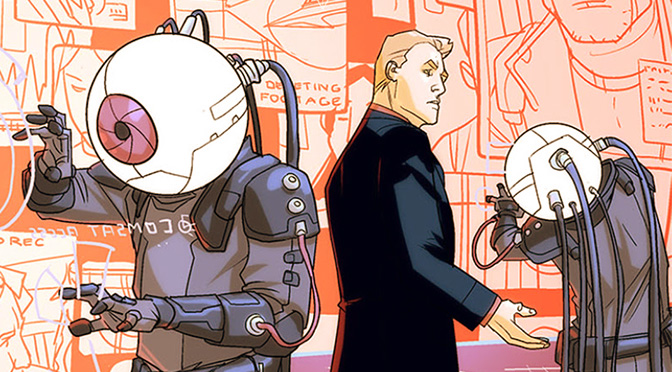 American publisher Dark Horse Comics’ “Cryptocracy” tackles the concept of shadow governments through a story about the so-called “Nine Families”. This group have, since time immemorial, watched from the shadows and manipulated major historical events from behind the scenes. The Nine Families saw themselves as shepherds of humankind, halting or accelerating civilization’s progress as they see fit. (For those familiar with Brian Azzarello’s “100 Bullets” (Vertigo Comics, 1999-2009), the concept evokes The Trust, a group of thirteen families who essentially control the United States.)

The first issue is spent mostly on world-building, introducing the hierarchy and power structure of the world within the comic through an “onion” model; the outermost layer being the 7+ billion humans on Earth, and the core consisting of the Elders and Priests of the Nine Families. Between them are various categorizations ranging from rank and file agents to high ranking, senior members of the families.

Cryptocracy #1 follows the story through main protagonist Grahame, who is a senior member of one of the families, MARS. It is made apparent through exposition that the Nine Families are named after planets: another family has been referred to as JUPITER. The story also hints that in spite of being a quasi-military organization exhibiting ruthless efficiency, the Nine Families are as volatile and dysfunctional as Prohibition-era mobster families. They occupy specific territories and are under a treaty, one that is currently in danger of being breached as one of the elders grow weak with old age, which could encourage other families to overstep their boundaries.

The narrative follows the protagonist as he performs his regular duties, which include handling the fallout arising from a botched sabotage of a weapons experiment, saving a political leader from assassination (with the help of alien technology and a talking bear bodyguard), using telepathic aliens to “scrub” people’s minds of information, and, oddly enough, revealing information about the botched operation to a conspiracy theory podcast, with the intention of making the truth so readily available to the public that it will not be taken seriously.

Behind the somewhat light take on the protagonist’s day, a threat looms in the background: a stranger with inhuman powers has infiltrated JUPITER’s headquarters and managed to kill everyone without much effort. It is hinted that the stranger is hunting down the Nine Families.

What makes a story like “Cryptocracy” unique among its ilk is that, even though it references many popular conspiracy theories, Mr Jensen manages to do so in a way that is not too heavy-handed. The comic references cultural fringe topics such as the Illuminati, the New World Order, Extraterrestrials, and Cryptids but it does so with tongue pressed firmly in-cheek. Obviously this comic is not meant to shed light on, expand, or debunk various conspiracy theories. Rather, it uses these topics as dressing for a well-written and enjoyable science fiction story.