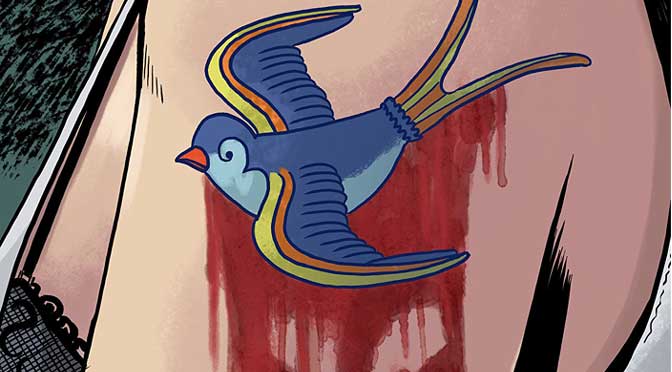 By way of monumental understatement, this new comic by writer John Ward is concerned with tattoos.

Humans have long tattooed their skins. “Otzi” was discovered in the Italian Alps near the Austrian border in 1991 by German tourists.The man was wounded by an arrow and died while lying in his side. Otzi’s death occurred in spring around 3350BC. An ice flow covered his corpse and his body was revealed when the ice flow partially thawed approximately 5300 years after Otzi’s death. Forensic analysis has demonstrated that he had eaten ibex meat two hours before his death. Ibexes are long extinct in Europe. On Otzi’s body are sixty-one tattoos. Most are on his legs. These consist of concentrated waves of ink around Otzi’s lower limbs. The meaning of those tattoos is and will forever remain a mystery.

Tattoos are often a life-altering change to a person’s physical appearance, sometimes but certainly not always symbolic of some event, self-perception, or devotion. In this title, the main character, Dee, is a tattoo artist. She is a forlorn figure, someone who would prefer to be a conventional artist but who was told in art school that she was innately sub-standard. Some people self-identify with their skills and talents, and it is clear that for Dee, this assessment by her teachers was crushing.

But something has gone wrong with one tattoo. One of her recent customers, a girl named Sarah, has started behaving and first strangely, and then extends into psychotic violence, tearing people to shreds. “It’s smothering me,” Sarah shrieks. “It wants to live. And it doesn’t care who it hurts.” Her own hand in a confrontation is pulverised, the bone “turned to liquid”. The tattoo has taken control of Sarah. She tries to kill herself by leaping off a bridge but is stun gunned and apprehended by the police. But at the police station, once she has recovered from the stun gun, she rips the policemen to pieces. Gutted carcasses that were once human line the corridor. Somehow, Sarah, underneath the malign control of the tattoo, prevents the same fate visiting Dee. And then, back to the bridge, where Sarah is finally successful in stopping her tattoo at the cost of her own life.

Dee decides to try and find alternative work, and the studio is closed. Here, she is plunged into lonely despair as her successive job applications are rejected. And then a phone call, from another former customer. His tattoo is acting strangely, he says. “I’m scared. My tattoo is… strange. It looks different. Like not in the right place. That’s not normal, right?” Dee promises to help.

Given the proliferation of tattoos amongst especially young people in Western countries, and the common apprehension that tattoos are an non-verbal expression or externalisation of some aspect of personality, this stark horror story should resonate with a broad readership. It is suspenseful and well-crafted, a flickering yellowed globe swinging on a cord between loneliness and blood. Mr Ward displays as much skill with his plot as his creation Dee does with her needle – hopefully without the same dire consequences.