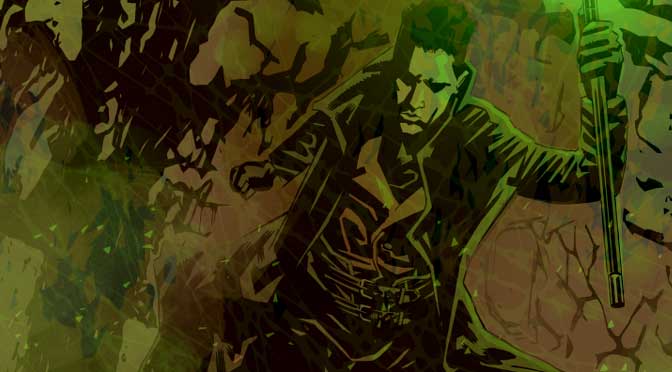 It is not often that we see a story where the protagonist is a place rather than a person. In “20 Storeys Down”, an independent publication written by Marc Olvent, despite the action being centred around a man saving the passengers on a Tube train, the actual protagonist is subterranean London.

London is plainly an old city, and beneath it lies many old tunnels, most famously the London Underground. Mr Olvent refers to these like an incantation of history: the Roman tunnels, the Circle Line, the Northern Line, the Strand Tube station. As we follow the adventure, we run through the arteries of the subterranean past and present. This is not explored in a magical way, as seen in the inverse London of Neil Gaiman’s Nevermore, but instead as some sort of archeologically-charged parkour. The focus on the tunnels and the history is an inspired novelty.

The plot is otherwise reasonable straightforward. A man lives in the Elizabeth Tower above Big Ben with his butler (as suspensions of disbelief go, this is no sillier than a man who has highly advanced computers and vehicles in his bat-filled cave under his stately manor). They are together looking for a lost library in the tunnels under London. The Roman number “VII” provides a clue as to its location, seen both on an old map, and later, carved into a tunnel flagstone. While out and about on his night-time expedition, the man hears news of a train on the Northern Line being hijacked. The dialogue on his motivation to assist is short and a little too staged:

“I know those tunnels better than anyone…times short. I’ve got to try and help.”

But the action that follows is entertaining enough, and the man saves the train by causing it to shunt into an emergency tunnel. The website for the comic, www.20storeysdown.com, describes the man as “Sgt Jack Tudor”, although his name is not actually revealed in this first issue. Despite the military (or police?) title, it is not yet clear why this subterranean explorer fears the police, and he covers his face when he is near them.

It is very early days for this title. Little has been revealed as yet, and in that regard, the pacing is a little too slow so as to be immediately engaging. We are told the creators are working on a second issue. But the focus on subterranean London is both innovative and intriguing, and the goal of finding a lost underground library will appeal to anyone who covets and enjoys finding old books in musty places. We truly hope that as the series progresses, we see more of the underground city, either disused or closed off to public access, including:

a. The London Hydraulic Power Company, set up in 1883, a hydraulic network of high-pressure water mains;
b. The River Fleet tunnel, which we mentioned (in a disparaging way) in a review of a Justice League title, but also other rivers which are still in existence such as the River Moselle, the River Tyburn, Hackney Brook and others;
c. The Kingsway telephone exchange deep level shelter sitting below the Chancery Lane tube station;
d. the London Pneumatic Despatch Company tunnels linking the General Post Office and Euston Railway station;
e. the London Post Office Railway;
f. closed London Underground stations such as Blake Hall, City Road, Down Street, Brompton Road, King William Street platform, Marlborough Road, Shoreditch, South Harrow, South Kentish Town, Westcott, and York Road.