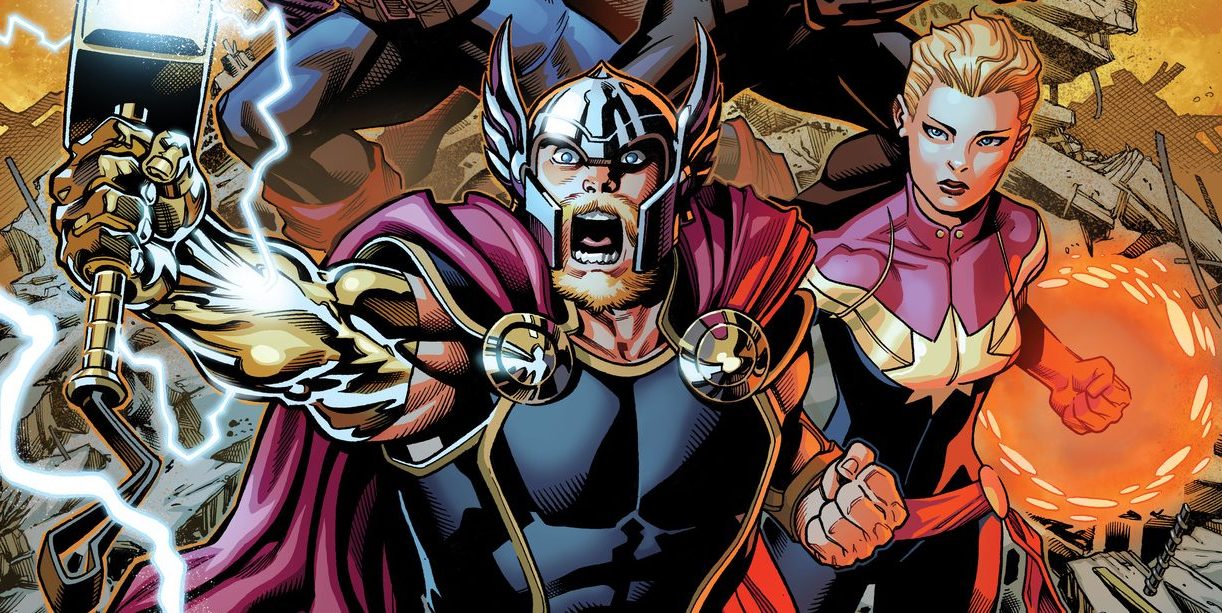 American comic book publisher Marvel Comics is making hay while the sun shines with the release of this new title, Avengers. Despite visual similarities with Marvel Cinematic Universe’s versions of The Avengers, the comic Avengers #1 has no connections to the recently released and highly successful film Avengers: Infinity War. In fact, the comic more or less follows the original members of the 1962 comic book version of the superhero team, with the character She-Hulk replacing The Incredible Hulk’s slot. The comic is also set after several massive continuity-shaking storylines. This may be an editorial attempt to reassemble The Avengers into a much leaner iteration than recent versions of the superhero team.

For starters, we have Thor Odinson who has both lost his right arm and his enchanted hammer. The Asgardian god is now in possession of a new weapon and a magic prosthetic arm. Then we have Iron Man, who was recently in an extended comatose state. Rounding up the trio is Captain America, who has very recently – through a convoluted storyline that involves a sentient wish-granting cosmic artifact – been turned into the leader of the evil organisation, Hydra. All three heroes are meeting at a bar for a round of drinks, in an attempt to reconnect and reminisce.

Aside from the trio’s reunion, we also get scenes showing off some of the major characters. There’s Doctor Strange and Black Panther in Wakanda investigating an ancient mystery. Captain Marvel in outer space investigating a suspicious intrusion. And She Hulk is struggling to keep her anger in check while walking in public. The odd one out is Ghost Rider, the spirit of vengeance whose current iteration manifests with a fiery automobile instead of a motorbike, who is fighting off an assault from giant insect monsters that have burst out of the ground.

Framing these unconnected segments is an odd flashback to a prehistoric version of The Avengers. This group features Thor’s father, Odin, filling the role of Thor in the group. The team otherwise consists of inexplicably prehistoric versions of Hulk, Doctor Strange, Black Panther, Captain Marvel, Ghost Rider, and The Phoenix. Doctor Strange and Black Panther are characters with immortal lines of secession: both the Phoenix and Odin are similarly godlike. But what of the rest? It seems that they are not in pre-history because they are the victims of misbegotten time travel. British writers Warren Ellis and Neil Gaiman have independently of each other explored the concept of superhero teams being a form of immune system response periodically created by a mechanism of the Earth’s biosphere to combat lethal threats – is this happening here? In any event, these prehistoric Avengers have defeated a weakened Celestial only to face assault from a new group of invading Celestials. In Marvel Comics’ continuity, the Celestials are a race of giant cosmic beings with the power to destroy and create planets.

The flashback further serves as a set up to Avengers #1’s main plot: in the present day, the intrusion that Captain Marvel is investigating turns out to be the first in a series of dead Celestial bodies falling from the sky. The final page introduces what killed those dead Celestials. Only a remarkable threat could kill these beings.

The timeliness of Avengers #1 is a great play on Marvel’s part – this is essentially a reboot of the Avengers team within the comic book medium. But it is obviously riding on the hype and momentum generated by the Avengers: Infinity War film. One can easily see how the comic plays with visuals and character interactions that remind readers of the film. But the comic’s story is completely emancipated from the films. The story and character line-up is best appreciated by readers who are up to date on the comic, especially since the tone of the core members’ reunion point to the characters wanting a fresh slate.

If Marvel plays their cards right, Avengers #1 could open the doors to a more accessible version of the comic book superhero team, although even if that fails to pan out, the comic itself is still a great read.

Veteran readers of American superhero comic books may feel like the plot is yet again the same old cosmic threat that countless other crossover events have already tackled. But there are hints throughout the issue (and the flashback) that the Celestials are a misdirection – this cosmic threat is not the main point of the series. Instead, it is a vehicle through which Marvel can reconsolidate the title’s character roster, and at least sweep some of the recent (mind-numbingly convoluted) storylines under the rug. The promise of a more accessible version of The Avengers makes it easy at this very early point to recommend this new comic book series.