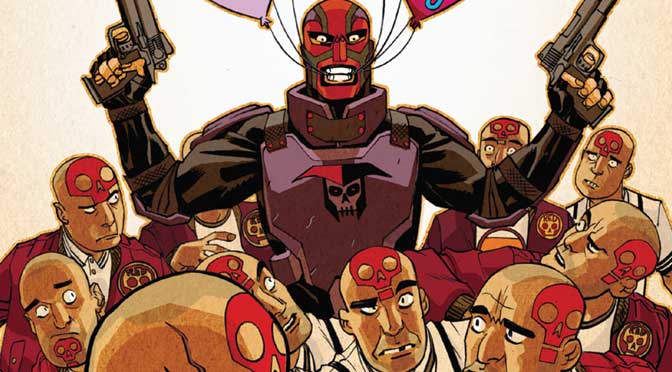 In our review of Foolkiller #1, we compared the character Foolkiller in passing to American publisher Marvel Comics’ gun-toting antihero Punisher. In the second issue of the series, it would appear that the similarity between the two fictional characters is not lost on the fictional spy agency, SHIELD. (We have written about SHIELD many times in our reviews, and in a future article we will look at the histories of these sorts of organisations.) SHIELD is the employer of Greg Salinger, the alter ego of Foolkiller.

In the story, Salinger’s SHIELD handler reacted positively to news that the “Foolkiller” persona has returned and massacred a group of neo-Nazis. Apparently, SHIELD has always wanted their own version of the Punisher, but since the Punisher is a lone wolf-type character which cannot be controlled and would never work a government agency, SHIELD employed Foolkiller instead. In their proposed system, SHIELD sends various bad guys to Salinger in order to see if they can be rehabilitated. On the event that they are deemed hopeless, Salinger pays them a visit as Foolkiller.

It is a remarkably dark setup, and one that comic book readers familiar with SHIELD may have trouble accepting (the agency is known for resorting to extreme measures, but has never outright condoned murder.) But notably the first issue hints that Salinger’s handler might not be working for SHIELD at all.

The issue also delves into Salinger’s personal life, particularly his wife Melanie (who is a TV personality) and her coworkers. In here we get a glimpse of Salinger’s mounting and clinically sociopathic frustration – that he has to play nice and trade passive aggressive barbs with his wife’s snooty colleagues even though he, in his Foolkiller persona, can easily beat them into a pulp.

Afterwards, we get to see another of Salinger’s clients – a villain who calls himself “The Shit King.” The comic censors the first part of the name as “#$%E” but it’s easy to get what it stands for based on context, and the fact that his costume has a lump of feces as its emblem. The decision to censor the word is puzzling, given that the comic is a mature title that tackles far more sensitive subject matter. We assume this was an editorial directive possibly brought from on high at Marvel Comics’ parent company, Disney.

The Shit King tells Salinger his farcical origin story, which again spotlights Mr Bemis’ penchance for humor – as a kid, The Shit King and his parents were barbecuing on a rooftop when the dragon Fin Fang Foom (a recurring and somewhat dated Marvel villain who is a giant, green alien dragon) decides to defecate on them. Only the Shit King survived the ordeal, and as an unfortunate side effect gained “stench powers” that give him the ability to release an odor so horrible that it can put a man to sleep. It is not subtle comedy but toilet humor rarely is.

After failing to convince the Shit King to reform and live a normal life. Greg ends the session and we get a full-page panel of Foolkiller dumping a body bag, presumably containing the corpse of the Shit King, at the docks.

The final few pages of the comic continues to setup a bigger story arc, with someone managing to break into Salinger’s home, leaving a CD with the word “Fool” written in red ink. The CD contains news reports of his wife’s past. It so happens that Melanie is a convicted killer, who accidentally killed her father through a prank gone wrong. This is supposed to be a major conflict for Salinger as Melanie’s past actions should have put her on his list of “fools” to “kill,” but decides to forgive her instead. The effect, sadly, is underwhelming, cliché, and does not fit the current trajectory of Salinger’s character in that he has gone back to his murderous ways and was given license by his employers to do so.

Another cliffhanger ending follows with the introduction of a mysterious man who appears to be mentally unstable and in “need” of a masked superhero. The presence of someone who looks like the cunning and street-smart Marvel Comics’ crime lord “The Hood” may point to this mysterious man being the third Foolkiller, Kurt Gerhardt. This character was part of The Hood’s criminal organization during Marvel Comics’ recent “Civil War” crossover event. If this is the case, then the series may be setting up a showdown between the last two individuals who have used the Foolkiller guise. This plot device – which is the better Foolkiller? – is hardly new, but it is engaging.

We praised the first issue of Foolkiller for finding an effective balance between humor and violence, and this second issue is more of the same. The writing is sharp and one can easily see that Mr Bemis is honing the title to a sharp tip. We recommend following this title.