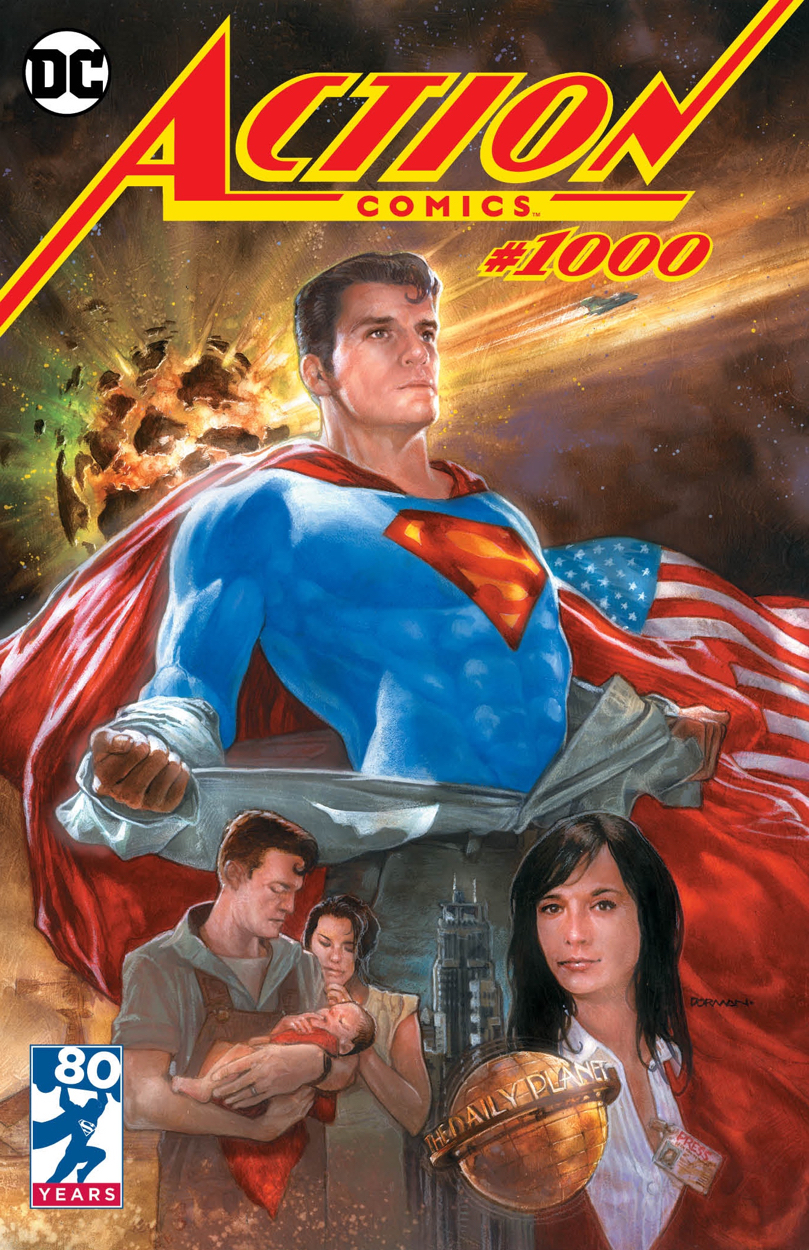 Superman is an American icon, and this milestone issue, coinciding with the 80th anniversary of the character’s creation, is (almost) all about celebrating that icon in the most dreary and predictable ways. Filled from cover to cover with warm and reverential tales of inspiration, the editors and writers took no chances whatsoever. The issue is designed to warm the heart with a frothless tonic of red, white, and blue.

Moving as rapidly through the issue as possible:

1. The first, twelve page story, entitled “From the City Which Has Everything”, consists of a celebration of Superman by the grateful citizens of the fictional city of Metropolis, Superman’s home town. Superman is not enjoying the attention. The day coincides with an alien invasion. The rest of the world’s superheroes clandestinely repel the invasion – we are told it was “touch and go” – so Superman can enjoy a day he clearly isn’t enjoying. It’s a head-scratching story.

2. “Never Ending Battle” is a fifteen page montage of scenes from Superman’s publication history. These scenes are duct-taped together as a singular dimension-hopping story that makes no sense at all. The story makes no pretense at being nothing more than a wobbly vehicle to pay homage, in singular pages, to prominent stories from Superman’s decades past. It reads like a poster book: there is only a single panel on each page. The story itself is entirely ancillary to that purpose of dissembling the pages and sticking them to a wall.

3. “The Enemy Within” is a five page story in which Superman’s enemy Brainiac (not actually pictured) tries to mind-control humanity starting with one specific human. “Humanity is stubborn” notes Superman, who then lauds human wonderfulness in a high altitude flight.

4. “The Car” is a five page story in which a 1930s era Superman convinces a recidivist criminal to go straight.

5. “The Fifth Season”: an utterly incomprehensible five page story involving a conversation between Superman and his arch-nemesis, Lex Luthor.

6. The first of the two good tales within this issue, entitled “Of Tomorrow” by Tom King, has Superman in the far future, bidding goodbye to the graves of his parents. The sun is expanding and the planet, already boiled and incapable of supporting life, is about to be consumed. It is a poignant, five page story about coping with the death of parents, albeit on the dramatic stage of the destruction of the Earth.

7. “Five Minutes” is a dreary five page tale demonstrating how Superman juggles between being a journalist and a superhero.

8. “ActionLand” by Paul Dini is an intriguing five page story defining the parameters of the strange psychology of Superman’s interdimensional enemy, Mr Mxyzptlk.

9. Reverting back to ordinariness, “Faster than a speeding bullet” is a dreary demonstration of how Superman’s heroism encourages a woman to resist a hostage taker’s gun to her head, which incidentally buys her enough time to enable Superman to catch the bullet. Five pages again.

10. Finally, “The Truth” is a launch pad designed to lure readers into buying the new title, “The Man of Steel”. This story is written by Brian Michael Bendis, a recent recruit to DC Comics from Marvel Comics. It features a Kryptonian hunting aliens who takes responsibility for the destruction of Superman’s homeworld. The final page features Superman impaled on some sort of energy blade. Mr Bendis also deploys his trademark character chatter: two young women trying to drag and hide a dazed Superman behind a shop counter note that Superman is once again wearing his red briefs over his blue tights, leading to some fun commentary. Not enough, sadly, to save this story from being nothing more than a fuzzy superhero battle replete with debris and explosions.

Expecting more than this, given the need to engage in homespun idolation, was probably too much. (We wonder whether part of the problem was the page length. Five pages is a very short platform for the best of American comic book writers, and certainly suboptimal for those who are used to writing three to four issue story arcs, say seventy five to one hundred pages, for collation as a trade paperback.)