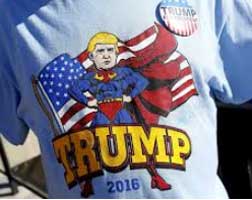 In a press statement issued yesterday (May 31), The Trump Group of Companies have announced a US $2.2 billion cash-and-equity deal to acquire the comic book character “Superman” from US entertainment company Warner Bros, a subsidiary of Time Warner Inc (NYSE:TWX).

Various business newspapers have noted that the deal is not subject to any regulatory approval but will nonetheless require a special general meeting of Time-Warner stockholders as a consequence of the size of the transaction and NYSE listing rules requiring stockholder approval for the disposition of a significant intangible asset.

“Superman” was created in 1933 by writer Jerry Siegel and artist Joe Shuster. The character generates many millions of dollars through sales of licensed merchandising every year, and has appeared in numerous comic books, animated cartoons, and movies. In the character’s most recent motion picture outing, “Batman v Superman,” one of the most expensive films ever made, produced a $278 million profit for Warner Bros.

This is the first outing for the Trump Group of Companies into intangible licensing assets, despite a solid history of engagement in entertainment businesses such as casinos and leisure resorts. Business journalism speculation is that this is the first step in the acquisition of a substantial portfolio of fictional characters, possibly inspired by or seeking to emulate Disney’s (NYSE:DIS) successful purchases of Marvel Comics (the home of characters such as “Captain America” and “Iron Man”) for US $4 billion in 2010, and Lucasfilm’s “Star Wars” properties for US $4 billion in 2012.

Warner Bros’ press release briefly noted that the deal is assisted by the conclusion of the film ‘Batman v Superman”, in which the character Superman apparently died in combat, allowing the Trump Group of Companies to reboot the character and obviating the need for the character’s absence in the forthcoming “Justice League” movie and future Warner Bros movies.

In this morning’s daily media briefing, White House presidential spokesman Sean Spicer spoke warmly of the deal. “It leaves open the possibility of cross-licensing the character for use by the White House in marketing activities for the President’s policy agendas,” Mr Spicer said. “Part of our communication issues through traditional media outlets is that the essence of the President’s policies are diluted.” Mr Spicer then singled out the Washington Post, the Wall Street Journal, and the New York Times in concluding that statement.

“By using the Superman property to promote the quite sensible rationales of the President’s executive orders, the President can better reach out to the American people and get the message across.”

Mr Spicer noted that the character could be used to “better explain to prevaricating voters the Constitutional purpose of construction of the border wall with Mexico, for example.” Mr Spicer refused to take questions on the details of any future licensing transaction. An opinion editorial piece on the GBS business television show “Morgan Edge Tonight” (a pro-Trump news outlet) has speculated on how little the US taxpayer would be charged for the use of the iconic property for marketing purposes. Prominent anti-Trump media outlets such as the Daily Planet newspaper ran an editorial in its evening edition questioning the value of the deal, and asked about the details of the potentially lucrative commercial terms of such a licensing arrangement.

“I think, and I know I speak for the President on this,” Mr Spicer said in the conclusion of the press briefing, “the character is wasted in use on lunchboxes and children’s pyjamas. What better use is there of Superman than to explain to the American people the policies of the President for the betterment of the American people? And what better way to represent the apex of power in this country – the President – than by using Superman as the policy flagbearer and fictional spokesperson, if you like, for the President? Superman will help Make America Great Again, faster than a speeding bullet!”