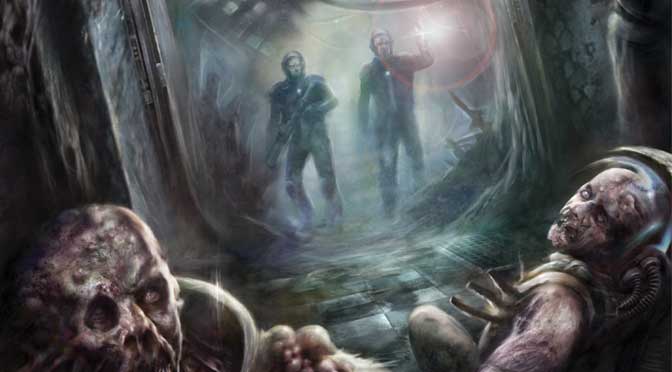 “John Carpenter’s Tales of Science Fiction” is a new horror anthology series from Storm King Comics. This imprint is the publishing arm of American film director John Carpenter and his wife/collaborator Sandy King’s production company, Storm King Productions. The first story arc in the anthology is a three-part sci-fi horror yarn titled “Vault,” from California-based fiction author James Ninness. The incorporation of the “John Carpenter” brand to the comic adds some magic, the endorsement of Mr Ninness’ work guaranteeing appeal to his loyal audience.

But is Mr Ninness capable of his own illusory craftsmanship? The story of “Vault” revolves around the crew of the spacecraft Gaia, who have been sent to the moon on a supposed resource collecting mission. But the spacefarers are actually investigating an inactive alien spacecraft moored on the far side of the moon. Upon reaching their destination, they are understandably surprised to find that the ship has a fully-functioning AI that uses a quote from an Emily Dickinson poem as a welcome.

The crew are then horrified to find the remains of the alien ship’s crew. Each alien died for reasons unknown to the human salvage team at the time of discovery. Ominously, each corpse is infested by an unknown but irradiated fungus. The last few pages of the comic have things going badly. Gaia and the solo crew member left aboard are attacked by a mysterious, reptilian-like monster. This leaves the rest of Gaia’s crew stranded and vulnerable in the alien ship.

Any reader familiar with John Carpenter’s body of work will already know exactly what to expect from this anthology. Writer James Ninness for his part manages to emulate the feel of 1980s American sci-fi horror in his writing, although “Vault” feels more like James Cameron’s “Aliens” than Carpenter’s “The Thing,” owing to the lunar setting.

“Vault’s” pacing is fast, which is understandable given that there are only three issues within which to establish and play with the concepts. So the story can be forgiven for its shortcuts when it comes to setting up the plot and introducing the characters. Do not expect any world-building. The story expects the reader to fill in the blanks as to when the story happened. There is no attempt to establish anything outside of what was happening within the Gaia spaceship and its crew. Our planet could be a utopia or a dystopia in this plot, and, on reflection, such back story probably does not matter.

There is an attempt to flesh out the characters through their dialogue interactions with each other. But unfortunately it feels hokey. The characters have formulaic personalities that readers have seen before in similar stories – the stern, assertive female commanding officer, the happy-go-lucky pilot, and so on. A significant chunk of the crew’s interactions are delivered in the form of passive-aggressive banter. This locker-room exchange is very common in the genre of horror science fiction, to the point of cliche.

And story-wise, why do corporations/governments keep sending groups of people who openly dislike each other on possibly dangerous missions that require teamwork? It seems to us that many future human resources managers and their consultant psychologists should be fired from their jobs. Astronauts are generally very likeable people, for good reason: no one can afford to get into an irreconcilable personal altercation in the void of space.

Still, this is only the first issue. There are several big mysteries being set up in the story. Mr Ninness can still take the story in a completely unexpected direction so we are not giving up hope. But so far we find nothing groundbreaking or innovative in this first issue. It is unfolding into a decent sci fi / horror story, but into one that aficionados of the genre have seen in many other stories. We recommend approaching the first issue with low expectations.

Or if you are familiar with Mr Ninness’ past works, you may instead be confident that he can magically conjure an out-of-the-box surprise in the next couple of issues.