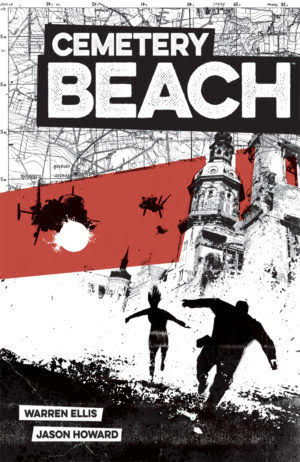 If humans successfully move off-planet and establish far-reaching colonies, will they bring with them the sins of the past?

Mr Ellis creatively salvages outdated and esoteric science, evidenced by his dabbles in science fiction’s steampunk genre. In Planetary (2007), Mr Ellis has a group of 1890s eminent scientists plus Jules Verne use a giant cannon to shoot into space a steel ball containing three explorers. In Aetheric Mechanics (2008), an army led by heavily armed giant mechanical suits threaten 1907 England. This time around, in Cemetery Beach, scientists and industrialists in the 1920s use a (as-yet, undisclosed) type of interstellar portal to colonise a distant planet. But the entire exercise is an enormous secret, notwithstanding “shedloads of paperwork detailing attempts to find life-supporting exoplanets through a completely shattershot exploration process”. This is done by way of “converted bathyscaphes with electric heaters and telescopes and sextants”. It is a compelling tale painted with broad, suggestive strokes that make the reader crave more information, and create their own theses.

For long time readers of Mr Ellis’ work, there is something nostalgic about this proposition. Amateur space explorers made it to a distant planet (a map on the back cover of the comic indicates the colonial city is called “Maincastle”), and that secret was uncovered by stumbling upon a warehouse of paperwork. Mr Ellis revisits the exploration of the secrets of the world, a recurrent theme of the very popular title Planetary.

The story’s protagonist, Michael Blackburn, is an American soldier sent from the Earth (called “oldhome” by the colonists) to investigate how this scenario could have happened and yet remained a secret from not just the public-at-large but also from governments. Mr Ellis uses an interrogation of Blackburn by a colonial soldier to allow Blackburn to tell his story and provide us with a backdrop as to the creation of this new world. The plot landscape is spun extremely quickly and concisely, with an abundance of Mr Ellis’ usual penchant of quip.

It evolves that Blackburn is an advance scout (“Force Reconnaissance”) living in Maine, who was captured immediately after arrival at the colony. Wikipedia notes that Force Reconnaissance is a unit of the United States Marines, and “is responsible for operating independently behind enemy lines performing unconventional special operations, in support of conventional warfare. The unit’s various methods of airborne, heliborne, submarine and waterborne insertions and extractions are similar to those of the Navy SEALs, Army Special Forces, 75th Ranger Regiment, or Air Force Combat Controllers, although Force Recon’s missions and tasks do differ slightly with a focus on primarily supporting Marine expeditionary and amphibious operations.” And so it seems that Blackburn is there to establish a beachhead for the US Marine Corps, whose task is to establish a beachhead for the armed forces. Blackburn will be the first of many.

Blackburn is engaged in deep reconnaissance. Writing in 1926, the Chief of Scouts Frederick Russell Burnham noted:

It is imperative that a scout should know the history, tradition, religion, social customs, and superstitions of whatever country or people he is called on to work in or among. This is almost as necessary as to know the physical character of the country, its climate and products. Certain people will do certain things almost without fail. Certain other things, perfectly feasible, they will not do. There is no danger of knowing too much of the mental habits of an enemy. One should neither underestimate the enemy nor credit him with superhuman powers. Fear and courage are latent in every human being, though roused into activity by very diverse means.

Blackburn charms his guard by bumming a cigarette and telling him stories of advances in technology back on Earth. Here we have the deployment of layered humour. As described to a person from the 1920s, smart phones, the internet and dick picks sound entirely unbelievable, and we laugh at the colonial interrogator’s disbelief. The humour switches to violence in a flash: Blackburn then demonstrates uncanny acrobatic ability and kills the guard. He then releases a woman who is being held in another cell, as a “native guide”. The two escape the prison by way of a floating platform, and are pursued into Maincastle by soldiers on what seems to be flying motorcycles.

Mr Ellis’ wit and imagination are on full display in this title. But what is the theory underpinning the story?

To us, it seems Mr Ellis is viewing culture and technology as biology:

a. The technology within the comic has evolved in a particular way. Deprived of the technological innovations of World War Two and beyond, the colony’s technology remains stagnant in some respects (the walkie-talkies used by the soldiers look like army surplus from the Great War), and has advanced in others. In isolation, technology has been subject to its own indigenous evolutionary pressures;

b. The culture is one of those evolutionary pressures, and is subject to its own pressures in turn. We have an autocratic president, a tower filled with bloody interrogation cells, and so far all we have seen of the populace is the constant presence of soldiers – is a highly militarised society. As Blackburn escapes, he finds in the back of a jeep a pistol with enormous shells. Why would a society have need of such a firearm? Either because there are giant things to shoot dead, or because the visuals of such a firearm are helpful in keeping subdued a population. Why have a floating platform? Either because of the need for close air support to infantry which, like the A-10 Thunderbolt enables “loitering” at low altitude at slow speeds, or because of the need to convey cargo at distance above dangerous terrain. A flying platform would do the same thing. And the soldiers are different. Blackburn is a professional, highly trained and capable of rapid improvisation. The interrogator is sloppy, and those chasing Blackburn fire indiscriminately into houses lining the street. As seen so far, the society of Maincastle reminds us of Joseph Conrad’s depiction of the Belgian Congo Heart of Darkness. Far removed from international societal norms and with wobbly rule of law and legal institutions, Maincastle’s evolution has been backwards – it has become corrupted. The corpulent figure of the president is a stark symbol of decadence. The only thing missing so far is an oppressed native population.

Mr Ellis readily combines futurism and philosophy to describe the human condition. Rarely do his titles not have a bedrock of thought. We will be reading this title to its conclusion.

No Capes Here: The Wildstorm #1 (review)