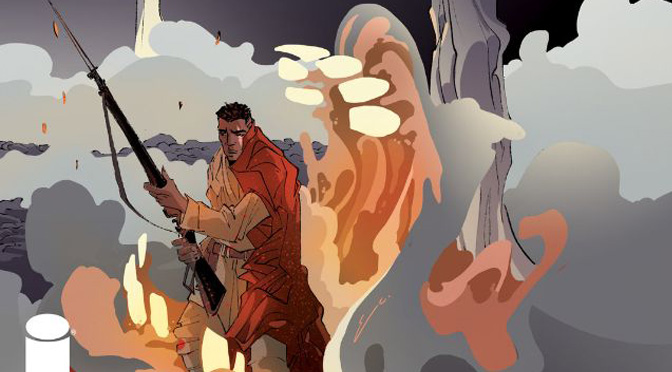 A dark, strange comic which started as an infusion of American mysticism and the Western cowboy tradition, “Pretty Deadly” was as stark on the comics landscape as a hoodoo in the Sonora.

An example of this strangeness is the narrative. It is a conversation between a decomposing rabbit, shot in the head and its brains and skull exposed and twisted by the impact of the bullet, and a butterfly. The horror of the rabbit’s decaying appearance is juxtaposed with the gentle and patient dialogue. The two creatures ramble, Hemingway on a calm day, a whimsical lull punctuated by eerie horror and a crescendo of violence, and the rabbit disturbingly rots away during the course of the plot, whittled down to a ruined skeleton.

This title has been the subject of controversy. Yet commercially it has been extremely successful, a happy by-product of the quality and novelty of this work.

In the first story arc, Fox, a blind balladeer, and Sissy, a small and slightly deranged girl with a vulture feather cape, bring their travelling show to a small town. They tell the audience of the story of a captive beauty who is praying for death. But, the story goes, Death falls in love her and she bears him a daughter. This is Deadface Ginny, a reaper of Death, “a hunter of men who have sinned,” and surely the creepiest feminist icon in comic books to date. The story is, of course, a reality within the plot. As the story progresses, Sissy, assisted by the sword-wielding Ginny, assumes Death’s position and seeks to assert dominion over the scattered Reapers, each an agent of death.

In the most recent arc, time has moved on and so has the Western theme of the title. It is no longer a strange tale from the West. A character from the first arc, Sarah Fields, is dying, and she is given a full moon’s worth of extra life so that her son, Cyrus, may see her one last time. The plot changes to a quest, to find and return Cyrus before the moon rises. But the backdrop changes to the blasted quagmire of Flanders fields in the Great War, where Cyrus fights in the trenches. And there is a new player, the Reaper of War.

In issue 9, Cyrus is dead. His delivery to his dying mother before the full moon rises heart-wrenchingly does not come to pass. Ginny fights against the Reaper of War, who feeds off the fear of the soldiers on the Western Front, and she has been dealt a mortal blow.

The exchange of dialogue is poetic, with a structure reminiscent of Oliver Wendell Holmes’s poem “Questions and Answers”.

Where, oh where are the visions of morning,
Fresh as the dews of our prime?
Gone, like tenants that quit without warning,
Down the back entry of time.

Where, oh where are life’s lilies and roses,
Nursed in the golden dawn’s smile?
Dead as the bulrushes round little Moses,
On the old banks of the Nile.

Ms DeConnick’s exchange between Bone Bunny and Butterfly is of the same pedigree, albeit with a jagged and scraping edge:

“What does Ginny fight when she fights fear?”
“Herself. Just as we all do.”
“No, Bunny, what scares her? What scares her in particular?”
“Captivity. Failure. One so powerful as to keep her from seeing her purpose through.”

There is something very special about this comic. In some ways, perhaps simply because of the comic book format, it evokes Neil Gaiman’s classic, “The Sandman” (DC Comics / Vertigo Comics, 1989-1996). In “The Sandman”, time was inconsequential, reality a malleable and negligible envelope, and death, including premature death, an inconsequential result of mortality. Any feeling regret about death experienced by the title protagonist, The Sandman, was a matter of principle or honour, until he slowly warmed to the importance of the brief lives of humanity as brought about his own end, consumed by heartbreak and complexity.

But this title is different, because of the bleeding and helpless poignancy. Dreamy timelessness mixes with the inevitability brought about by time’s passage. Heartache over the unfinished, brought about by the ephemeral nature of life, is shadowed by violence. Mirrored images in the art and the silhouettes of the players accentuates the dream-like state of the action and the plot. At the conclusion, in contrast to the traditional celebration of the heroic dead of the Great War, a combat nurse instead bitterly mutters, “God bless the cowards”, carting the corpses away. Death is a bitter waste yet an unavoidable coda, leaving threads of emotion unravelled forever.

There were rumours at the end of the first story arc that the title had been discontinued. For our part, so long as Ms DeConnick continues to write “Pretty Deadly”, we will continue to avidly read it.