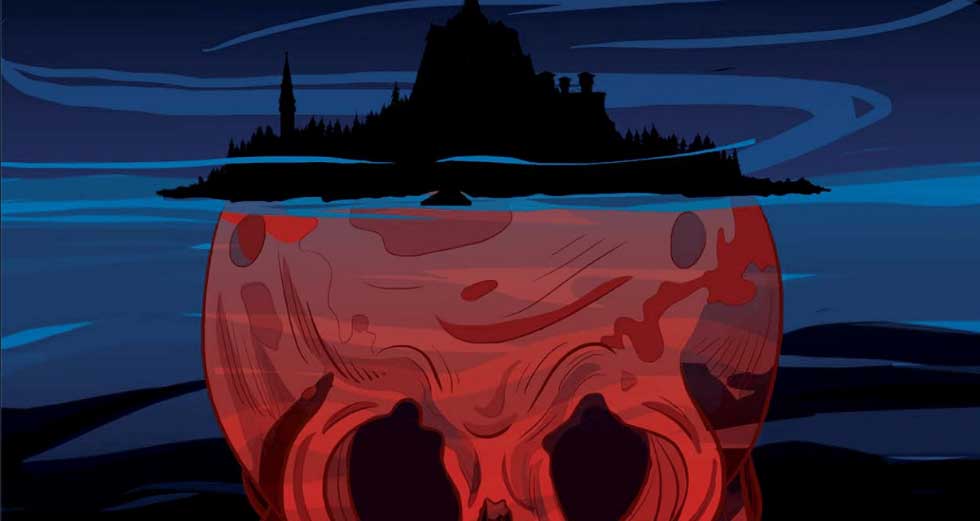 Do not be deterred by the cliched title. Ghost Island, a horror comic book written by Joseph Oliveira, is a figurative and literally excursion into caged horror.

More specifically, the plot involves a nascent theme park set on an isolated island, and which features homicidal spectres. The island was once the location of an asylum for the criminally insane. The new owner, a wealthy and eccentric man named Deakins, has discovered that ghosts haunt and are apparently trapped within each of the cells. Deakins has decided to convert the island into a thematic vacation destination so that people can visit the ghosts with the ease of touring an exotic zoo. It is a bizarre and innovative concept.

To effect this plan, Deakins calls in a team consisting of a priest, a tabloid reporter (Dennis) and his “apprentice”(Alice), a watchman (Mason) and his son (Billy), and a psychic (Evans). Their task is to catalogue the ghosts, so as to provide engaging background information on each of them for future visitors.

“My ghosts are safely tucked away but I know nothing about them. It would be irresponsible and cheap of me to display them to the public as just a spectacle alone.”

Deakins has a butler named Lance, who is keen to berate Billy for too closely examining an enormous mounted boar’s head. A passing comment between Deakins and Lance in the second issue suggests that Lance is very deeply embedded in he mystery of the island.

The psychic, Joshua Evans, is the lead character. Evans’ wife has been murdered in circumstances suggesting he is somehow to blame. Evans is way down on his luck, living in a squalid room, unable to pay his rent, and benefiting from the largesse of his sympathetic landlord. The invitation to Ghost Island and the promise of a large wad of cash for a “private special reading” comes at the right time.

Mr Oliveira repeatedly presses the time-honoured horror button of endangered or threatened children. The introductory sequence features a father who had drowned his son in a lake in order to keep secret the father’s rape of his daughter. In one chilling panel we see, summoned by Evans, the pale spectre of the drowned son. And in the main story set on the island, Billy goes missing, following the voice of his dead mother into the shuttered asylum. Mason, a recovering alcoholic with an awful and tragic secret, is distraught and quickly driven to drink. The effect of the bottle leads Mason into a ghost’s cell. Mason’s last words encourage the witnesses to his dismemberment by a spectral butcher to “[w]atch my boy”.

While we may be disturbed by the sinister, cleaver-wielding ghost, his bloody origin, and the bullet holes in his abdomen, the character we dislike most is the journalist, Mike Dennis. This is a man who is happy to fabricate the facts, who detests but is willing to sleaze up to Evans to learn the secret of Evan’s wife’s well-publicised death and thereby get a scoop, and who has replaced his moral compass with a price tag. The girl, Alice, who accompanies Dennis has finished her newspaper apprenticeship and apparently has been given a career break in exchange for sexual favours: Dennis never fails to belittle Alice for her inherent inadequacies as a reporter. Some excellent dialogue spells out the integrity and awareness of the character in his regard for Syrian refugees: “D’you know where Lynn was assigned this weekend- Greece! Some report on, I don’t know, migrants or something… at least it’s warm there.” We suspect the odious Dennis is doomed, and if Mr Oliveira’s readers have any sympathy for Dennis it is only because his fate will be too horrible to contemplate.

The plot of the story reads as some sort of sequel to the 2010 motion picture Shutter Island. In that movie, an asylum for the criminally insane is set on an island in the 1930s. The lead character is subject to lobotomy at the movie’s conclusion, a particularly nasty (and now illegal) surgical method of negating a troublesome personality. On Ghost Island, the asylum has been closed for decades, following Government investigation of “experiments” forced the asylum’s closure in the 1970s.

Other influences are apparent. In Hellblazer #55, published by Vertigo Comics, there is a story written by Garth Ennis involving a demon called Calabraxis, the Devil’s Butcher, who hangs his victims on a meat hook. The ghost is by technique alone reminiscent of this dire character.

Neither observation is a complaint. Ghost Island is more than fit for conversion into another, broader form of mass media such as a motion picture or a television series. If we have any complaint at all, it is that Mr Oliveira decided to apparently set the story in the United States. The indicia to this is the use of dollars and the word “Mom” (rather than “Mum”).

But Ghost Island reads as a bleak British story, betraying the locale of the publisher. The dead butcher could have been a character from a bleak town in Cornwall. Ghost Island itself could appear on a map on the Irish Sea. The tabloid journalist and his opportunistic cynicism could have stepped out of a NewsCorp office in Fleet Street. Deakins himself with his slicked-back hair and thick beard looks like an eccentric and well-heeled Scot. If American motion picture producers insist on perpetuating the cliche of casting British villains, then Ghost Island is fertile ground for indulgence, filled with highly unlikeable characters, expertly fleshed out, each of whom should be exposed to a bigger audience.

The ferry captain who conveys the visitors to the island has to be drunk to do his job, and is in an enormous hurry to get home. We suspect that before the conclusion of this clever and genuinely scary story we might need a bracing drink or two as well.

Ghost Island #3 is available on Kickstarter.