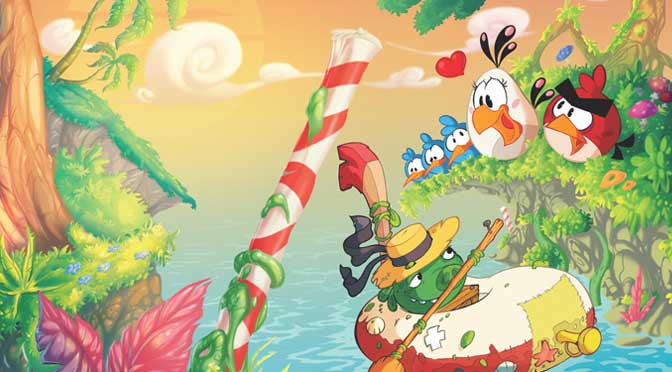 Online games have a long history of being supported by ancillary publishing material such as comics, magazines and books. “Angry Birds” is an online game originally developed in Finland by a company called Rovio Entertainment. Such was the significance of the game’s development in Finland that national airline carrier Finn-Air featured various Angry Birds characters on the nose of one of its Airbus passenger aircraft.

The game consists of birds trying to stop green pigs from stealing eggs. The game player uses skills refined through repetition to level up. Despite the simple concept, or perhaps because of it, the game has been downloaded over two billion times.

This first issue consists of three individual stories, called, respectively, “Sakura Ninja” (the birds’ pig adversaries give the birds Japanese weapons in the hope the birds become exhausted, but are stopped in their egg thieving by one of the birds): “Operation Nautilus” (a pig’s failed heist by submarine); and “Hat Trick” (a pig falls in love with a bird, who has been transformed in an avian Aphrodite by way of a beautiful hat. In a scene reminiscent of Disney’s “Lady and the Tramp”, the pig betrays the bird while sharing pasta).

The stories are what you would expect of a comic aimed at an audience of less than ten years old. But unfortunately there is no subtext of humour orientated towards adults in this comic, and certainly no effort to elevate the sophistication of the comic in other ways.

Given the popularity of the game amongst adults, this is a shame. The “Angry Birds” concept could have an interesting backdrop. We assume, as with Disney’s Frozen (which we have previously reviewed) that there are only so many things that the writers can do within tight creative parameters defined by the franchise’s owners.

In January 2014, the app version of the game was described by press sources as being used to collect information for two spy agencies, the US National Security Agendy, and the UK GCHQ. These claims were revealed by NAA contractor and whistleblower Edward Snowden. The claims were denied by Rovio Entertainment. Perhaps in those circumstances it is too much to ask for the writers of this title to set aside ninjas, and provide an espionage version of the birds? In the absence of wry humour, issues of this title are likely to end up as unmourned paper pulp.