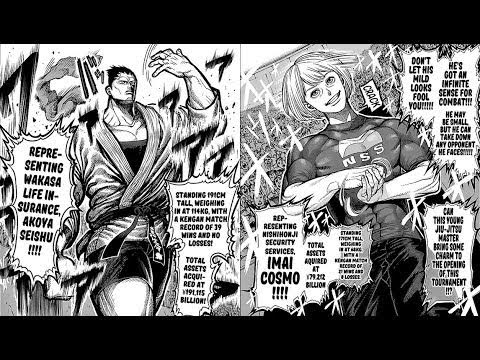 Kengan Ashura is a Japanese “fighting” shonen manga written by Yabako Sandrovich and illustrated by Daromeon. The underpinning plot is straightforward. In an alternate-universe Japan, unarmed gladiators engage in combat. The contestants are backed by corporations (including banks – one fighter is sponsored by the fictional Dainippon Bank) and the wealthy. The fighters battle with high-stakes outcomes. The fights, run by the Kengan Association, are intended to keep corporations from resolving disputes in other ways.

Mr Sandrovich creates an elaborate alternative Japanese history to provide a framework to his story. In 1715, increasingly violent battles between merchants lead to the intervention of seventh Shogun of the Tokugawa Shogunate, Tokugawa Ietsugu. The Shogun commanded the businessmen to resolve their issues by ritualised fist-fights, involving hired combatants representing the respective commercial entities. Thus, the traders resolve contentious issues. This trial by combat is described as evolving over time into the arena competitions of the story.

The outcomes of fights include lucrative contracts (one is the construction rights to the new Makunochi Building). Another involves acquisition of a highly valuable Old Master art work. The influential position of chairman of the Kengan Association is decided through a contest dramatically called the Kengan Annihiliation Tournament. The concept is to police corporate warfare which might adversely affect innocent bystanders. (But no doubt for many of the title’s readers engaged in corporate employment in Japan, it is an exciting alternative to the drudgery of tenders and contract procurement.)

The main character, a handsome and enormous man named Tokita Ohma, who goes by the name “Ashura”, is an immensely capable fighter. Upon his discovery, Ashura is quickly signed up by the chairman of a company called Nogi Group chairman.

Ashura faces a variety of opponents throughout the five year, 23 volume run, which has been serialized on the manga website Ura Sunday and on the smartphone application Manga One. The main characters in the title are either fighters or their sponsors, each with unique moves or borderline inhuman abilities (for example, blinding speed, or the ability to mimic another fighters’ techniques). Some of these fighters are depicted as very formidable indeed:

There are some intriguing quirks to the story:

a. There is an area called Naka (中, translated as “the Inside” in English), located in Yamanashi Prefecture. It covers an area of approximately fifty square kilometres and has a population of about 200,000. Formed in around 1868, the region is entirely lawless. The Japanese government refers to it as the “Illegally Occupied Territories”. The Inside is a brutal environment, riddled with dilapidated buildings. Brothels and drug dealers abound. Use by Mr Sandrovich of the kanji 中 is very pointed. This kanji is very frequently used in both Japan and China to describe things which are Chinese (the characters for China, the Middle Kingdom, are中国 in both Japanese and Chinese). As non-native Japanese speakers, we suspect that there is a nuance in play about the culture of Japan’s regional adversary.

b. As he was born and raised in the Inside, Ashura is illiterate. Mr Sandrovich demonstrates this in an interesting way. Ashura is depicted as calling other characters by their full names, rather than their family names, suggesting etiquette never learned. And in the original Japanese version of the manga, the names are spelled out in katakana (a script used for foreign language words but also for emphasis) rather than in kanji (the Chinese-modified script used for complicated words).

c. One of the antagonists in the story is the Kure Clan, the name possibly derived from the Japanese word for “crimson”. The Kure Clan have a genetic quirk. First, their eyeballs are entirely black, given each of them a very ominous appearance.

Second, family members of the Kure clan can uncouple a fictional neurological limitation which is described as preventing humans from using more than 30% of their body’s physical capacity. One of the Kure Clan’s fighters, Raian, using this in combat. His skin turn red as blood vessels almost break through his skin, thereby temporarily accessing inhuman strength, speed, endurance and power.

And it evolves that the Kure are not what they seem.

While the broad concept is intriguing , Mr Sandrovich’s dialogue is terribly clichéd and cheesy. The exchanges between the characters are filled with posturing and raw animosity, and during fights the action and the dialogue is interspersed with sports commentary.

In addition to the attraction of blood sport to its overwhelmingly male audience, the manga frequently deploys Karla Kure to engage readers. This character is a pretty, apparently sweet member of the Kure Clan. Mr Sandrovich teases his audience by that uniquely Japanese intermingling of innocence with sex and unspeakable horror.

Notwithstanding these blunt techniques, the manga was rated number one by male respondents to a poll entitled “one million readers choose the most interesting web comics 2018.” It has also been a commercial success, usually a springboard into other media, and indeed, in December 2017, it was announced that the manga is to be made into an anime.