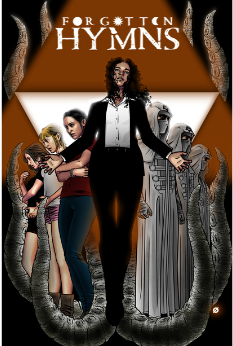 Schlock horror is the equivalent of eating out-of-date chocolate. You screw your nose up at the experience, feel mildly unwell, and are left wondering why you bothered. We may be a little snooty, but bad horror is not something to be encouraged. There is an element of self-indulgence and immaturity to it. This review website looks at a lot of horror comic books, and they have invariably been of solid quality.

With that feint of an introduction, this title, though, left your critic gasping for breath.

We normally have no reluctance to include spoilers in our reviews. But this one must be preserved. Forgotten Hymns has one of the most horrible scenes we have ever seen in a comic, in which a father celebrates a birthday with his doting daughter. There is next to no blood, aside from a hand injury. Yet, after reading that particular scene, this reviewer actually had to sit down and try to process what happened. It was superbly executed.

The issue consists of a series of apparently related but interspersed vignettes. Lillian Richmond and her offsider Howard Clayborn (a former CIA agent) are busy cleaning up the terrible sex crimes caused by Lillian’s father billionaire Maxwell Richmond. Unbeknown to them, they are being stalked by a district attorney’s office, which is putting together a case against Richmond. Lillian Richmond’s occasional lover, Senator Neal Tepp, gives Lillian a heads-up that her father’s arrest is imminent. In the meantime, a young girl is found by police in a rural setting eating roadkill. A common thread to the stories appears to be a Lovecraftian cult. (The revival of HP Lovecraft’s concepts into the zeitgeist over the past ten years has been fascinating to watch, and we wonder what it means.)

Writer Andrew Guilde’s dialogue is chilling, crisp and punchy. (Mr Guilde has a sense of humour which is not obvious in this title – see https://www.aguilde.com/about/ ). The art, by Isaac Perez, is quite beautiful (particularly the cover), almost out-of-place for a gritty storyline like this. The plot is haunting. We were disturbed by it from beginning to end. This is a brilliant start to a compelling new horror series.

The second issue of Forgotten Hymns is currently in a Kickstarter campaign: https://www.kickstarter.com/projects/forgottenhymns/forgotten-hymns-1-2-of-a-lovecraftian-noir-horror-comic?ref=project_link