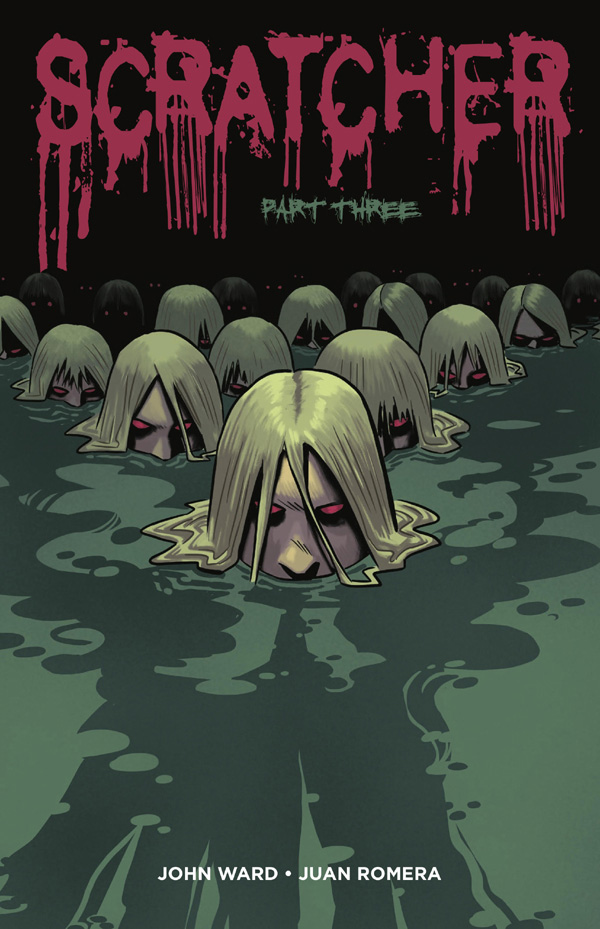 We have been following independently published horror title Scratcher since mid-2017. Our major complaint is that this excellent title is not published more often.

In this third issue, the protagonist, a very talented tattoo artist named Dee, tracks down the third person she unknowingly tattooed with some sort of demonic ink. The ink is a conduit for malevolent entities to control Dee’s tattooed customers, and once “infected” they start losing their humanity and begin to exhibit terrifying powers.

The third and latest victim is able to control other people by way of the mechanism of a hive mind, but further, replicate her personal, haunted appearance upon each of those people. They act as a mindless, cannibalistic mob, tearing and eating their victims. The idea of tattoos as sources of mystic power is hardly a new one – a well-known witch in Massachusetts uses tattoo ink in her “blood magic” – but this title executes upon the concept in genuinely horrible ways.

There is palpable tension within the title – Dee barely makes it out of the maw of the demonic mob alive, and is hospitalised with wounds. While in hospital, she is haunted by the spirit inhabiting the ink in a macabre sequence. Dee’s success in redeeming herself for her mistake has brought dire attention.

And Mr Ward mixes this creeping dread with a sense of alienation. Dee is a particularly unfriendly person who rejects help, something the demon recognises in her. There is an interesting concept buried within this characterisation. Once, as noted in this article, people “tattooed themselves to confirm their alienation from society: thugs, prostitutes, and sailors — who had proper jobs but spent their leisure time in the shadier reaches of the service industry.” But tattooing is nowadays very popular. As this academic paper notes:

“[A] Harris poll of 2225 United States respondents performed in 2015 found that 29% of Americans had at least one tattoo, an increase from 14% in 2008 and 21% in 2012. Tattoos were slightly more common among United States women (31%) than men (27%). Younger respondents were more likely to have tattoos, with nearly half (47%) of those 18-35 years old reporting that they had a tattoo. Regret about having a tattoo was reported in 23% of respondents, an increase from 14%-17% in previous years. Based on limited sample sizes from these two surveys, it therefore appears that tattooing has become much more common in the United States, particularly among young adults where rates may approach 1 in 2.”

In the 1990s, tattoos became commoditised and sold to happy mainstream people. But Dee exhibits the sort of alienation and anger that was once the reserve of the tattooed. She embodies that historic temperament all while inking the contemporary middle class.

“The final – and EPIC – issue our our horror miniseries will be released in early 2019 and I’m excited for you to see where this story ends.”

We confirm we are not just excited, but thoroughly intrigued to see how this ends. This title is available for sale on Comixology.