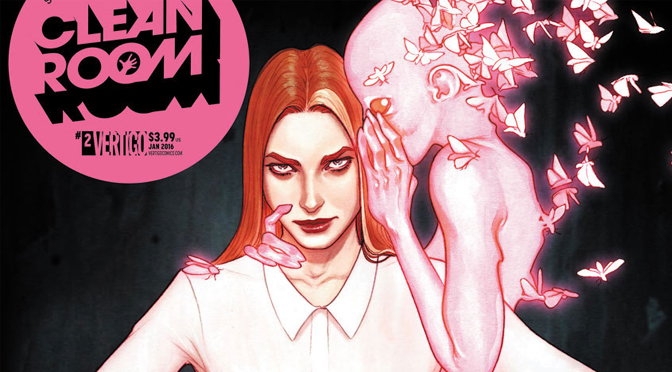 Gail Simone is a comic book writer with a deserved reputation in characterisation. In titles such as “Birds of Prey”, “Batgirl”, “Secret Six”, and most recently “Tomb Raider”, Ms Simone takes often but not exclusively female characters and engages in a process of overhaul. This was most obvious in “Secret Six” where Ms Simone reshaped the previously forgettable villain “Catman” into a rational and even likeable personality. For very extended writing projects like “Birds of Prey”, this detailed addition of character was a prolonged exercise with some subtlety: certain players in the plot slowly changed direction over a long period of time, while others (notably the lead character, the paraplegic mastermind Barbara Gordon) engaged in a process of shaping peers (and, indeed, in the case of Barbara Gordon, authorial identification with the character rendered it sometimes difficult to ascertain where the fictional character ends and Ms Simone begins). These sometimes musty, sometimes unremarkable characters spring to life under Ms Simone’s care and interact with each other in a way which makes them approachable and likeable. Ms Simone has done this so often in the genre of superhero comics, and with such sympathy and thought, that one would think it was her exclusive stock-in-trade.

There is little of that warm subtlety in “Clean Room”. That assessment is intended in the most complimentary manner. This is plainly a disturbing horror story. The characters are well-defined, in the manner we expect from Ms Simone, and the dialogue rings true. But it is a frightening story. There is nothing warm and collegial between the characters. There is a failed suicide suffering from a haunting by a friend with his head half blown away: a man reduced to living in the streets terrified by his experiences: a small child involved in a terrible and deliberate car crash who, surviving, sees her father’s face as covered in snakes. The failed suicide is in fact a journalist named Chloe and she seeks the truth of a self-help cult. It is alarming when she is frightened, scrambling madly out of her chair, by a sudden vision of a grotesque demon muttering about the smell of Chloe’s shaved pubic hair.

This is executed with brutal surprise. The visions of horror are perhaps real, perhaps caused by stress or mental disturbance, or perhaps inflicted through the machinations of the sinister Astrid Mueller. This character runs an organisation described in the monologue narration as existing in “that weird twilight industry between self-help and religion”. It is clear that there is a cult of personality in place and that personality is used to manipulate the vulnerable and unwell. But the visions give the antagonists an awful sense of purpose, one of wrongness.

Part of the horror comes from the uncertainty as to whether there are demons or the undead existing in the story, or whether these things are simply manifestations of mental disease. When Chloe is strapped down and restrained in a mental ward, is she a victim of Astrid Mueller’s evil, or is she just suffering from her own illness somehow triggered by Mueller’s book? The unanswered questions pace the book slowly, and the unexpected horror shocks the reader. It is perhaps the flickering brevity of the horror elements which most jar the reader. And the last page in particular paints a picture of dread, of a powerful and plainly irritated figure surrounded by accomplices about to provide to Chloe far too much truth.

This title is a very respectable foray by Vertigo Comics back into the horror genre. Ms Simone hinted that she had a flair for horror in such stories as “Harvest” in “Birds of Prey” 77 and 78 for DC Comics (2005), where the antagonist, railway spikes jutting from stale wounds in her withered shoulders, is a grim spectre seeking vengeance against those who have performed vile deeds, motivated by her own rape, torture and murder. But this picture of terror was bleached by the suspension of reality and triumph of altruism necessary for superhero comics.

“Clean Room” is on another level entirely. The bleak future for Chloe laid out in this first issue, detailed in the summation of the homeless man and his shocking experience in the Clean Room, is the promise of monstrous head games for both characters and readers. It is highly recommended for those aficionados of psychological horror.