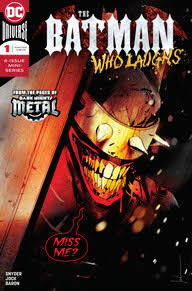 In this comic, DC Comics’ premier superhero Batman is being stalked by an other-dimensional version of himself known as The Batman Who Laughs: a Batman released from his moral code as a consequence of exposure to a  “singular supertoxin” released when the Joker dies, and which infects the Joker’s murderer. This is a relatively recent development in the canon of Batman and the Joker, and a disappointing one: for all of their survival skills, both characters are meant to be ordinary men without the taint of the superhuman.

Most of the story sets up the scene at the end when Batman is infected with the supertoxin. It is the interlude which is poignant. Writer Scott Snyder has Batman dramatically foil a body-smuggling operation in which the dead are conveyed out of Gotham City in order to be jacked up.

Batman looks inside one of the coffins to find the 45 year old corpse of Bruce Wayne.

This is an other-dimensional Bruce Wayne, one who gave up being Batman when his back was broken by Bane. A wedding ring is missing from his finger, and a tattoo with the word “May” signifies to Batman a thought known only to him: that he and  Catwoman had a daughter who would have been called May. “May is… May is the name I would have suggested to Selina if we had ever had a daughter. It evokes a new start. A new beginning.” Batman, looking at old recognisable scars and the absence of newer scars, calculates that this version of himself gave up crimefighting after being beaten by Bane, and looked to other ways to help Gotham City – through construction.

This dead version of Batman gives away secrets of his life through his face:

Batman: The lines around Bruce’s eyes…
Alfred: Smile lines.
Batman: And his mouth.
Alfred: Laugh lines.
Batman: Yes. It seems whatever life he built, he was…
Alfred: Happy.
Batman: [silence]
Alfred: Sir. Sir. Are you there?
Batman: I’m here.

It is a poignant scene. Batman sees himself as he might have been if he had given up his never-ending war on crime and settled down, raised a family, and become happy. Batman looks at a version of himself where he eventually recovered from the trauma of his parents’ murder, at a version who did not make the mistake of fighting on. Batman sees a Bruce Wayne who called it a day, and became happy in life.

We have been critical of Mr Snyder’s work in the past. But these few pages demonstrate an understanding of the character, and a rendition of the character’s heartache, which is superb.