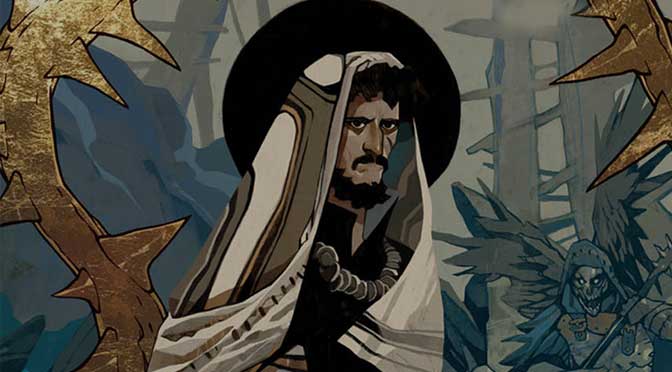 Judas is a new comic book series from American publisher BOOM! Studios. It focuses on a character based on Judas Escariot, one of the twelve disciples of Jesus Christ. The story is set after the events of his betrayal and suicide, and depicts the former disciple wandering through hell, interspersed with passages from the Bible and brief flashbacks to his life both as a young man and as a disciple of Jesus Christ.

There are obvious challenges in writing a story like Judas. On the one hand there is the temptation to be too close to the source material, such that the end product is didactic, boring, and unimaginative. On the other hand, there is the risk of exercising too much creative license so as to stray too far from the Bible. Overlayed with this is the challenge of potentially disrespecting a major religion and its followers by being too sympathetic to the title character.

Fortunately, in Judas, author Jeff Loveless manages to find the perfect balance. Mr Loveless crafts a story that expands and innovates upon Judas Escariot’s tale without being offensive or blasphemous to any but the most zealous of readers

The story largely focuses on Judas’ ruminations on the events that led to his fate as the betrayer of the Messiah. Mr Loveless is very careful not to make Judas out into a singular villain who betrayed his friend and mentor out of malice. For Judas, it is very much a role to play, or, perhaps, a task that he neither asked for or wanted.

Within this title, Judas is not as steadfast in his beliefs and faith as one would expect of a disciple. He very much accepts and believes that Christ is the savior, but he also calls into question why this manifestation of God – who can walk on water, bring the dead back to life, and feed a multitude of men with two loaves of bread – should have to go through all of his human hardships, instead of just using these powers to make everything right. The doubts and the guilt on display add a very humanizing element to Judas, but avoid painting him as a tragic hero.

Framing Judas’ introspection on his life and death is a journey through the cold plains of hell. Hell is depicted as bleak and dangerous, even to someone who is no longer concerned with death. There is a very real mystery being built here, despite an uneventful first issue. Judas seems to be walking towards something despite not knowing the destination, or his reason. The final few pages also introduce a mysterious individual: a pale, gaunt humanoid entity who is feared by the damned, and who has an interest in keeping Judas safe from the terrors of Hell.

This is hardly the first time a comic book has depicted a journey through hell. Jimbo in Purgatory: being a mis-recounting of Dante Alighieri’s Divine Comedy in pictures and un-numbered footnotes (Fantagraphics Books, 2004) is a graphic novel by Gary Panter, adapting of Dante’s Purgatorio . Ty Templton’s comic Stig’s Inferno (Vortex Comics,1986) was a comedic journey through Hell. Grant Morrison’s Kid Eternity (Vertigo Comics, 1991), featured a character called Kid Eternity and his companion, a dying comedian named Jerry Sullivan, travel to and around, a Dante-inspired Hell, filled with unspeakable horrors.

But this hell is silent and desolate, much like George Bernard Shaw’s 1903 comedic play, Don Juan in Hell, but with much more serious subject matter.

Judas #1 might not be the best comic to put into a Christmas stocking. But it is such a finely crafted tale that stands on its own regardless of any interest in religion.