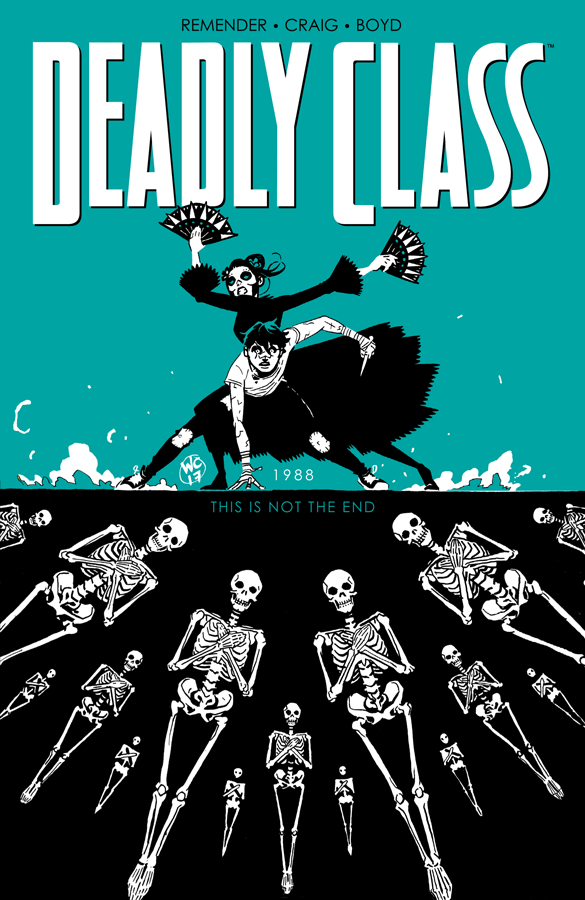 One wonders how much of a nostalgic trip crafting the plot and dialogue for Deadly Class must be for Rick Remender. Mr Remender is the writer and creator of what is in our view the best title presently on offer in the US comic book market. We think it must be an extraordinarily amount of fun to revisit high school with its heroes and villains, its unfolding experiences, its naive wisdom, and its unique memories. But even better, the one thing an underdog high school student would ever want, writing this story allows Mr Remender to utterly control the lives and fates of the students.

Set in 1988, Deadly Class is ostensibly a story about the students of Kings Dominion, a high school academy for the refinement of violence. But Mr Remender draws deep upon what was then popular culture to provide more than just temporal context to the story: he uses extended conversations about the merits of 1980s pop culture, particularly of music, to advance the characterisation of the major players. These are highly amusing exchanges – and there are many of them, going on for pages. It is hard for your reviewer, who is familiar with the music of this era, to silently agree or disagree with a character’s particular position on a band or genre. Muttered grunts of approval or disapproval seem by experience to be inevitable when engrossed in these extended and informed discussions on the merits of the likes of Slayer, The Cure, and many other bands which made their fame in the late 1980s. It is highly engaging, another example of Mr Remender’s proficiency.

There’s also a superhero mise en abyme or two. Two of the characters, the likeable but dangerous Petra and the German heavy metal fan Helmut take a sardonic look at the origin of famous US superhero Batman (parodied as “The Burrito”).

Mr Remender also has the creepy mastermind antagonist Shabnam read and loudly complain about the plot of an Uncanny X-Men comic.

This is ironic. Mr Remender’s fame within the comics industry was in essence built upon the work he did for Marvel Comics’ Uncanny X-Force (2010-2013). In that title, Mr Remender drew deeply from story lines and characters (especially villains) from writer Chris Claremont’s time penning Uncanny X-Men in the 1980s. Now we have an explanation as to why Mr Remender omitted the Goblin Queen as an adversary in Uncanny X-Force. It is a poke in the ribs by Mr Remender to his fellow, aged readers of Uncanny X-Men during its 1980s heydays.

Reintroduced to the story in volume 5 were Marcus and Maria. Marcus is perhaps not so much the high school underdog as the high school black sheep. Marcus’ apparently death, in volume 4, was an event we sincerely mourned in our previous review of Deadly Class But as it evolved, and explained in volume 6, the girl who stabbed Marcus through the chest, Saya, was skilled enough with her sword to miss any important organ or vertebrae.

Thus Marcus lives on. On one level, we regret this. Marcus’ apparently death was a shocking twist to the story of Deadly Class. That twist has been unravelled by improbable swordsmanship. It is a shame that Mr Remender chose to bring Marcus back. Similarly Maria, Marcus’ girlfriend and who was apparently killed by Kings Dominion’s principal Master Lin in volume 2, also returns, as discussed below. Raising the dead is a hallmark of superhero comics, and we would not wish for Mr Remender to emulate that which he otherwise mocks.

Once helped to escape from the morgue by Saya, Marcus then goes on in the closing scenes of volume five to rescue Maria from the Mexican drug cartel family who restrained and tortured her for months. (That rescue involves amusing toilet humour.) By volume six, the two are hiding out on a beach named Puerto Penasco in Mexico, smoking marijuana, sunning themselves, and enjoying life beyond death-dealing. Marcus has a conversation with the spectre of his best friend Willie, a melancholy chat which suggests that notwithstanding the peace and quiet of the beach, Marcus is still suffering. This is another fine example of nuanced characterisation by Mr Remender.

Through a cascading series of betrayals, Marcus and Maria are discovered by Viktor, a KGB prodigy and thoroughly unpleasant thug. We have had several years now to develop a firm dislike of this ugliest of characters. Viktor busts into the hotel room where Marcus and his friends have finished an orgy of sorts and are now having a dance party in their underwear. But the group are tipped off by Quan, the student who has led Viktor to their hideout, and they escape through the hotel window. Viktor decides to pick them off with a rifle. The final page has Viktor with a rictus grin, turning to see Marcus catch him by surprise. Marcus is holding a pistol, pointed at Viktor’s face. With tense, sparse dialogue, it is clear that Marcus is grimly delighted with the turn of events whereby Viktor’s life or death is in his hands.

Mr Remender’s skill in characterisation is such that we would be pleased to see Marcus square away some bloody debts and shoot Viktor in the head without further commentary. But we suspect the forthcoming events of volume 7 will require Marcus to leave Viktor alive. Viktor’s sniper skills will be necessary to save Maria, Petra, Helmet and Marcus’ other new friends from an attacking horde of Yakuza, out to capture Marcus and willing to cut down those in their path.

The concept of Yakuza on a Mexican beach is on the face of it, odd. The Yakuza thugs, also led by Quan to Puerto Penasco, have already drugged and imprisoned Saya. The events leading to Saya’s defeat by her vicious brother Kenji are revealed at the beginning of this volume, in the context of how Saya came to secretly enrol at Kings Dominion.

Saya, as it turns out, even as a child, outshined her brother in her potential to run the family business of crime. She does not flinch or cry out at all when given a full suit of Yakuza tattoos. And when it incorrectly appears she has killed the leader of an allied Yakuza family, Saya cuts off three of her fingers as tribute and atonement. Saya becomes legendary, an untouchable rival to Kenji, and now we witness the execution of Kenji’s ruthless plan to crush Saya’s mystique and reputation. Brutal violence between the Yakuza and the group of highly skilled trainee assassins of Kings Dominion is imminent.

Graduation seems far away. If that ultimate event brings to a conclusion the adventures of the students of Kings Dominion, we hope it does not arrive any time soon.