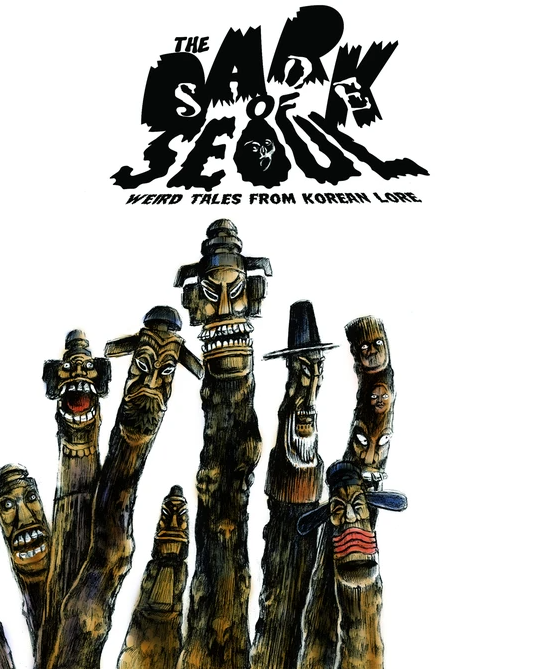 It is quite an ingenious thing for a tour guide to capture the stories of a city in a comic book. That is what writer Shawn Morrissey, a long-term resident of Seoul in Korea, has done with his ghost tour. Mr Morrissey guides tourist around Seoul, and notes that even though Korea is a modern industrial powerhouse, the supernatural traditions of Korea run deep:

In this introduction, Mr Morrissey, a Canadian brought up on Celtic traditional stories, sought out Korean folklore upon his arrival in the country:

“Early on, I heard of Japgwi, Dokkaeshi, Chewshin, and other preternatural folk beings. I studied the work of folklorists Im Bong, Jeoing In-Seop, Sohn Chin-Tae among others. And I sat with the people, the folk, and listened to their stories, their tales. In many cases, these were more than simple recitals. They were beliefs”.

With those words in mind, Mr Morrissey and the very capable artist Tim Bauer (who is part-Korean) set out for us three historical tales:

In an interview with the Korea Times https://www.koreatimes.co.kr/www/nation/2020/08/177_294551.html , Mr Morrissey describes his fascination with the subject matter.

“There is so much content that I’d love to share on the Dark Side of Seoul tour,” Morrissey told The Korea Times, “but there are limitations ― like finding suitable moments to segue into a tale, since the key is to connect a specific location with the content of a tale. It’s not easy to incorporate all the tales I’d like to share because of those limitations. I had been contemplating how to share more of this content to a wider audience. So, I had the idea to write a comic book, bridging my love for horror comics and Korean folktales, while meeting my want to share more… I’m not an academic folklorist, so I’m less interested in categorizing folklore than I am in listening to the tales or beliefs from those who believe in them. Folklore is culture and it tells a lot about the beliefs and lifestyles of people, past and present. Ghost sightings on TikTok is good fun, sure, but folklore is beautiful.”

Korean shamans in and around Seoul are called mudang. Central to Korean shamanism is the belief in many different supernatural creatures, and the sort of ancestor worship we see in “Wicked Things Love Darkness”. The mudang are described as chosen persons. During shamanic rituals, mudang experience shinmyeong (“divine wind”), which is the channelling of a god, during which the shaman speaks prophetically. In his creation of this comic, and in his tours of Seoul, it occurs to us Mr Morrissey is a sort of shaman. He channels unearthly whispers, both a spirit guide and a guide to the spirits. This comic is partly autobiographical – Mr Morrissey is part of the story. But to what extent? Has Mr Morrissey been unwittingly co-opted by the folklore he talks about to further spread their harsh messages abroad by way of this sort of media coverage? Regardless of the machinations of spirit world, this comic opens a door to a fascinating and creepy mythology that is unexplored by most Westerners.