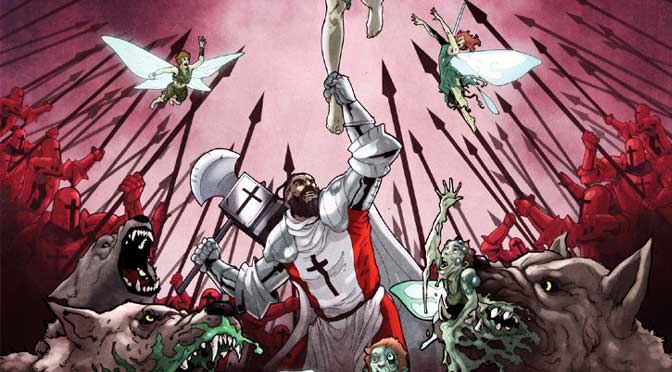 “Plague” is a new fantasy comic book mini-series from British comic book publisher Markosia. The comic’s title is derived from the historical setting, the year 1352 A.D. Bubonic plague (also known as the Black Death) swept through Europe and killed millions of people (and would continue to do so for centuries thereafter). The story is not a historical account of the period, but uses this bleak medieval period as a backdrop to a brewing conflict between mortal men and supernatural creatures.

In 1991, DC Comics’ title “The Sandman” issue 19, entitled “A Midsummer’s Night Dream”, controversially won a literary honour called the World Fantasy Award. Scripted by Neil Gaiman, the issue considered the plot from Shakespeare’s A Midsummer Night’s Dream” as if the fairy characters were watching a performance by humans. (The organisers of the award later clarified that the category was not intended for comic books, and no comic book has won the award since.) “The Sandman” essentially reintroduced into comic books the idea that fairies are occasionally dangerous creatures. In “Plague #1”, these creatures feature prominently but in a state of wane – like humans, the faerie have been afflicted by the plague. Their king, Auberon, having succumbed to the disease has magically transformed into the fabled whitethorne tree upon death. The faerie in the comic are depicted as having lost their luster, their magic drained by the plague. In addition, their numbers have been drastically reduced as a consequence of being hunted down by mortal men.

Two of these mortal men figure prominently in the story. The first of these is the Warbishop Jean De Moray. This Warbishop (a fictional religious office, for the avoidance of doubt) leads a band of knights to hunt down the faeriefolk, whom he considers spawns of Satan.

The Warbishop’s overzealous crusade is a product of a tragic childhood, being the sole survivor and witness when his family was murdered by a mysterious giant creature. This traumatic experience led young Jean to develop a deep-seated hatred of supernatural creatures. Despite his use of Catholic symbols and Christ’s name, the Warbishop’s actions paint him as misguided and undeniably worse than the things he hunts.

The other mortal man featured in the story is the last remaining friar in an abbey. All of the other friars have succumbed to the plague. The character is depicted as virtuous to a fault. The friar will not abandon his duties despite the hopelessness of the situation.

The two other players in the story are a female fairy named Danann, who is the only survivor of a pogrom instigated by Warbishop De Moray, and Tegg, who is the Prince of the Fey (a fairy prince) and one of the few fairies keen on the idea of bloody revenge.

The story is setting up a meeting between all four characters – a wounded Danann was found and tended to by the young friar. Both Warbishop De Moray and Tegg are in pursuit on starkly different missions. The structure of the story is straightforward. As the first issue, details of the backstory are sparse. Despite that, the writing is solid and engaging, and there is authorial care in fleshing out the characters. The setting is also used to great effect. A period beset by the bubonic plague paints a bleak atmosphere is made more depressing by the swirling mass of odium and despair surrounding the main characters. It is an engaging read, particularly for fans of The Sandman.