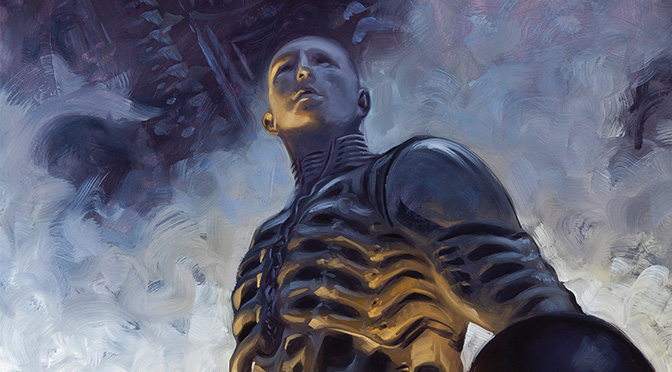 Motion picture director Sir Ridley Scott made the movie “Prometheus” (2013, Twentieth Century Fox) with great anticipation from the avid fans of the original “Alien” movie (1983, Twentieth Century Fox). The movie was a self-indulgent and at one point dreadfully misogynistic disappointment. Yet a sequel is nonetheless in production.

So a reader would be forgiven for approaching this title with trepidation. The Colonial Marines, a corps of soldiers who patrol humanity’s celestial footprint, have at great cost recovered an alien starship. They are endeavouring to bring it to Ganymede where malevolent corporation Weyland-Yutani has a base. It is accompanied by the marines’ warship, the USCM Hasdrubal.

One of the alien gods from the movie is accidentally revived and immediately kills one of the marines. The creature is resistant to gunfire. He takes control of the starship and starts it on an alternative course. The Hasdrubal follows in pursuit.

This plot sounds sparse, but the dialogue is strong: the soldiers are terse and stressed, and upon being set upon by the humanoid, are frantic. Some of the Colonial Marines see the alien and have an almost religious experience, overwhelmed by inhuman presence. They are short on ammunition, desperate and out of their depth. As the humanoid is very inhuman, the soldiers are written, with considerable craft, as very human.

The story is not as compelling as the “Alien” story we have recently reviewed. But it is good starting point to a science fiction adventure.