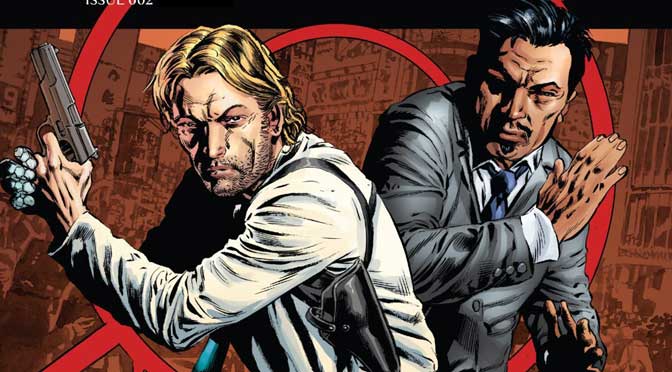 The James Bond brand might appear on the cover, and the reason for that is manifest: James Bond has enormous goodwill attached to it, a star with its own gravity well. But this title is almost devoid of Ian Fleming’s most famous creation. The British die-hard spy only appears in two explanatory flashbacks. Otherwise, the story is concerned with two supporting characters from the Bond mythos: the peripheral CIA agent Felix Leiter, a character which has served as an interface between the hip-and-shoulders British and American allies, and Japanese spymaster Tiger Tanaka. Tanaka is a character from Ian Fleming’s 1964 novel You Only Live Twice.

Indeed, the action of the title is so focussed is the story upon Tanaka that the title of the comic could have been James Bond: Tiger Tanaka instead of James Bond: Felix Leiter. Tanaka is the competent one, the aggressor, the vengeful assassin, the respected leader. Leiter is in contrast somewhat washed-up. He is missing an arm and a leg, a consequence of a shark attack dating back to Mr Fleming’s second novel, Live and Let Die (1954). Leiter appears in Mr Fleming’s third James Bond novel, Diamonds are Forever (1956) as a detective working for the Pinkerton Agency, having left the CIA. In this comic, Leiter has departed from the Pinkerton Agency and is working for himself, from an office situated in a cruddy locale. The hook and prosthetic leg seen in Diamonds are Forever are replaced by a gift from James Bond: cybernetic limbs, their contemporary and high technology origin visually communicated to the reader by a sheath of hexagons.

But setting aside the augmentation, Leiter is a man lost, musing as he paces the busy streets of Tokyo, seeking to identify a former lover, the exotically beautiful Russian Special Forces soldier Alena Davoff. Leiter and Davoff worked together in Afghanistan. Leiter fell in love: Davoff was incapable of it. And since then, Davoff has been busy removing traces of herself from public record. Leiter is one of the very few people who can visually identify her. Leiter spots her in a meeting in a bar drinking from a martini glass with a Korean man. He is then ambushed by Davoff in an alley. She is much better that Leiter in a fight. Leiter is only saved when her knife strikes his robotic arm, setting off sparks.

Leiter does not acquit himself well throughout the story. He is caught again by Davoff and cast into the ocean, saved only by using his artificial leg as a flotation device: he watches Tanaka literally carve up enemy combatants while Leiter takes the easy route to their target, a luxury yacht: Leiter is beset with self-doubt, regarding himself as a puppet when at the CIA, and nothing compared to Tanaka, Bond, or Davoff.

This characterisation is interesting. The minor character from the Bond mythos recognises himself as a minor player. In some ways this is a sad fate: Leiter is smart enough to know his limitations, and self-aware enough to know that his banter and assistance to Bond in times past were entirely as a conduit for the enormous resources of the US government. He was a pawn in the CIA’s Great Game, was a plaything to Davoff, and was cast aside by both when his usefulness was at an end.

But it is the interaction with Davoff which is most intriguing. The relationship with Davoff is the role reversal of usual James Bond stories, where the woman follows Bond around like a small planet circling a star: instead, it is Leiter who is caught in the gravitational tug of an irresistible, ruthless, and uncaring sexual partner. Le Belle Dame Sans Merci, the medieval poem of the knight errant struck down by beauty and condemned to suffer (“I did but see her passing by, and yet I love her til I die”), is a commonly recurring theme in literature. But it is at best infrequently seen in espionage stories and never seen in comic book espionage stories, let alone a James Bond story.

And Davoff does not die at the conclusion of the story, her fate most atypical of Bond villains. Instead, like James Bond, using her own resources and intellect, against the odds she survives. Our last view of her is of the dimples in the small of her back, sashaying in a bikini down golden sands, leaving a corpse in the shadow of a beach umbrella. Davoff talks to herself, contemplating her next encounter with Leiter. The dialogue conveys self-concern but is untinged with romance or revenge: instead, it is the inhuman musing of a cat thinking about a mouse.

The comic does have major flaws. Leiter’ inner dialogue is well and truly overused. The writer, James Robinson, is very experienced. He could have used other methods to better, or more accurately, further convey Leiter’s forlorn state of mind.

And Dynamite Entertainment’s associate editor Anthony Marques well and truly botches his role. One of the villains starts off with the name Benny Kita, and by the second instalment had become Johnny Kita. How did Mr Marques miss that? And in one panel, the word balloons have been accidentally reversed:

Tanaka: You think he gave his life in hope that this would all lead to your country re-militarizing? Very “Mishima” thing to do.

Other errors are more subtle. The main characters refer to Korean players by their given names (“Ji-yung”) rather than their family names (“Park”) which vaguely suggests that Mr Robinson and Mr Marques do not know that surnames are placed first in describing a Korean name. And the name of a death cult, “Atarashi Doro” is mis-spelt (it should be “Atarashii Dooro”) and it sounds unnatural and coined by a Westerner. “Atarashii” indeed means “new”, but a Japanese compound word incorporating the prefix “new” is much more likely to be “shin” than “atarashii”. The word “dooro” is probably better replaced by “michi” or “torimichi” (“path”, which has a better nuance). Some assistance from a native Japanese speaker would not have gone astray.

But overall, this is a book which slowly burns. The story unexpectedly returns to the surface of thoughts, days after it has been read. The more it is considered, the better it becomes. Davoff orders Leiter thrown overboard and he finds himself in the dark and in the deep ocean, alone, and this is perfect symbolism for their relationship. Leiter’s love for Davoff is a dead star, unattainable and lost in the deep.

Watching Leiter wandering the streets of rainy Tokyo, doomed by his memories of sex with Davoff, and in his meeting with a retired Russian spymaster at the conclusion, sadly seeking answers to the enigma of the woman he loves, we are drawn to think of those in our lives who could not be captured by the heart. In drawing upon that commonly shared, bitter emotion, Mr Morrison does his work very well indeed. That feeling of immutable loss evokes lines from another Mr Morrison, from the poem, Stoned Immaculate:

Soft driven, slow and mad
Like some new language
Reaching your head with the cold, sudden fury of a divine messenger
Let me tell you about heartache and the loss of god
Wandering, wandering in hopeless night
Out here in the perimeter there are no stars