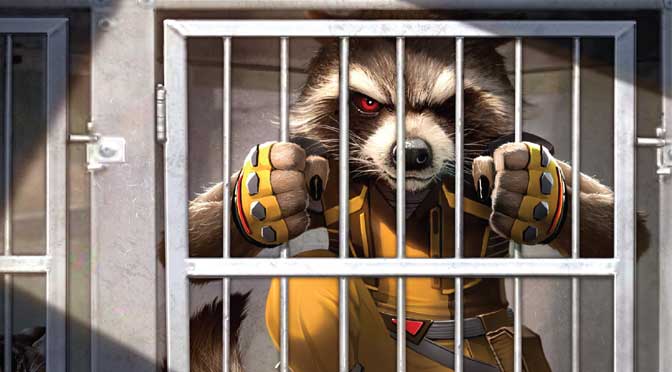 Anthropomorphizing animals is nothing new to the comic book genre: Disney Entertainment’s “Mickey Mouse” (1928) has a long line of thematic offspring, ranging from “Snoopy” (1950) to “Scooby Doo” (1969) to “Tawky Tawny” (1947). Giving a raccoon a dirty sense of humor, guns, and putting the character in space, however, is an almost unique anthropomorphic exercise even in a genre renowned for its wackiness. This character, called “Rocket Raccoon”, is the star of a new title.

As with most of American publisher Marvel Comics’ new comic books these days, “Rocket Raccoon” #1 is fairly inaccessible to readers that have no prior knowledge of the main character, owing to their steadfast adherence to publisher-wide continuity. Fortunately in this case, the Rocket Raccoon being depicted in terms of look and characterization is heavily based on the 2014 film “Guardians of the Galaxy” from Marvel Studios.

One only needs to have watched the 2014 film to have a working grasp of the story, although it features a glut of guest characters (such as former “Fantastic Four” member Johnny Storm and the “Inhumans” pet dog Lockjaw) that definitely do require familiarity with other Marvel Comics properties.

Readers who remember the film will understand why Rocket is perpetually angry – it was implied through dialogue, and with a scene depicting the scars on his back, that the character has been subjected to repeated (and very painful) experimentation, which could be the source of his exceptional intellect. Rocket is a master tactician, a gifted pilot and engineer, and a munitions expert.

In this story, being stuck in an unfamiliar and what he considers technologically backwards planet grates on Rocket Raccoon, causing intense boredom and frustration. So the character decides to roam the streets of Midtown Manhattan in order to find something worthwhile to do while searching for familiar faces (even mistaking a man wearing a cheap cardboard Iron Man costume for Tony Stark). His lack of familiarity with Earth’s customs, coupled with his complete disregard for the concept of customs in the first place, result in a few humorous encounters – in one situation doing something that he thought was a charitable act, but is actually tantamount to robbery.

The robbery leads to a run-in with policemen leading to a SWAT team being brought in. A more violent encounter was avoided with the timely appearance of Johnny Storm, who pretended to take Rocket into custody but actually intended to recruit the character into the superhero group called the Inhumans. Balking at the idea of joining another team, Rocket decides to slip out during one of Johnny Storm’s drunken rants.

Rocket uses his skills as a former bounty hunter to track down other extraterrestrials on Earth, particularly those that can smuggle him out of the planet. His quest leads him to a former acquaintance, and then onto a reformed Skrull trying to blend in with humans (Skrulls are war-hungry alien race with shapeshifting abilities often used as antagonists in Marvel Comics’ titles). The meeting, despite initially going well, ends in a cliffhanger. A mysterious human-looking assailant that is interested in Rocket suddenly decapitates the Skrull. The Skrull, interestingly still alive, advises Rocket to run.

Notwithstanding that gory conclusion, this first issue is relatively uneventful. But the story in “Rocket Racoon” #1 is engaging thanks to Messrs Coelho and Rosenberg’ deft handling of the Rocket Raccoon character. While there is a tragic backstory behind the character’s ornery disposition, pain and misery arising from torture is not being the fulcrum to characterisation. Instead Rocket comes off as fairly likeable.

The character is not begging for reader’s sympathy. Rather, his antisocial behaviour is used to generate sarcastic humor. The parameters of the humor is worth praise for not allowing the sarcasm to envelope crude toilet humor, though one should not expect any sophistication out of the gags (a long running one involves Rocket being mistaken for all manners of Earth animals.)

While the “cantankerous fish out of water” premise will not in our view be able to sustain an ongoing series indefinitely, it will work for the short term and fits in with the Rocket Raccoon property.