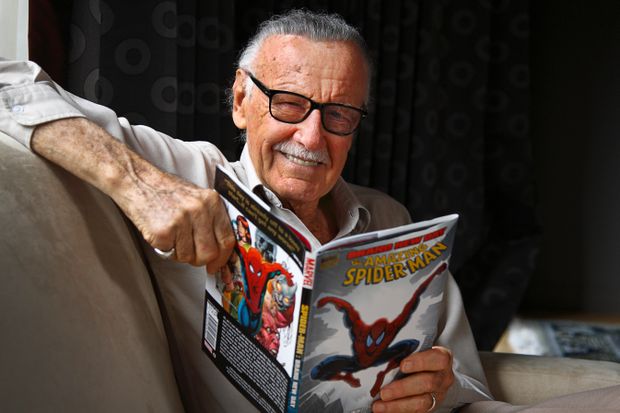 As most readers of American comic books will now be aware, writer / creator / media celebrity Stan Lee passed away yesterday at the age of 95.

“I used to think what I did was not very important,” Mr Lee pondered to the Chicago Tribune in an interview in April 2014. “People are building bridges and engaging in medical research, and here I was doing stories about fictional people who do extraordinary, crazy things and wear costumes. But I suppose I have come to realize that entertainment is not easily dismissed.”

Much will be said of the enormously long list of Stan Lee’s enduring creations over the next few days. But for the comic book industry, Mr Lee’s lasting legacy is his method of production. As Warren Ellis noted in his book Come in Alone (2001):

“There are two generally accepted ways of writing a script for comics. The first is the style developed by Stan Lee for writing loads of bloody books a month. When he kick-started Marvel Comics in the Sixties, he was pretty solely responsible for feeding a large and growing stable of artists in more than half a dozen books a month. Fantastic Four, Spider-Man, The Avengers, whatever books Doctor Strange and Iron Man and Captain America and all those others were appearing in… he was writing a lot. This was heroic output, a frighteningly sustained burst of creative power. But it will become clear that no human can produce that amount of full script on those deadlines – and he was editing the damn line too, remember. (I suspect there is a book on those early days of Marvel that needs writing – it always seemed to me to be the Old West of comics publishing, strange mad middle-aged men beating away at keys and boards deep into the night, being able to stand each other for just long enough to produce this prodigious, health-breaking amount of seminal work.) So he developed what we today call Marvel-style. This involves first breaking the story down as prose, fairly rough, leaving the artist to interpret it, translate it into drawn comics.”

The Marvel-style is still widely in use today. From the perspective of the craft of comics, this, rather than his creations, is his most significant legacy.

We have written recently on Mr Lee’s legal issues which concerned the enormous fame which his name attracts. That fame will continue long after his death.