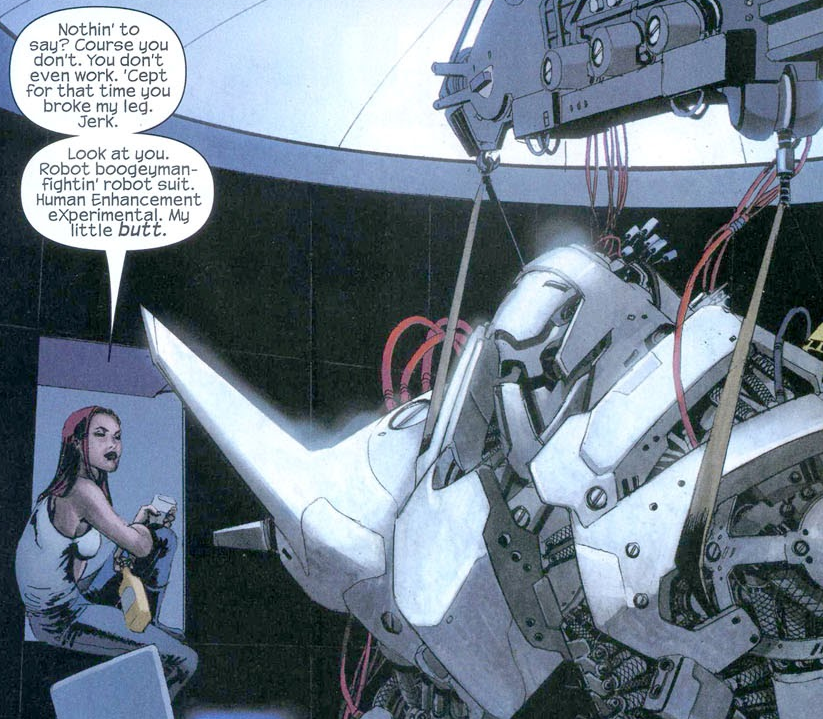 In 2007, Warren Ellis was tasked by American comic book publisher Marvel Comics to re-rig an abandoned 1986-1989 series of titles, called “New Universe”. The New Universe series of titles featured superheroes exiting on a parallel world to that of Marvel Comics’ main characters, created in celebration of Marvel Comics’ 25th anniversary in 1986 by then editor-in-chief Jim Shooter. Notwithstanding considerable fiscal restraints placed upon Marvel by its then-owners, the group of titles did reasonably well. The titles with duration, named Kickers, Inc., Mark Hazzard: Merc, Nightmask and Codename: Spitfire, were not cancelled because of poor sales but because of an editorial desire in 1989 to focus upon core concepts.

Mr Ellis kept some of the original features in his 2007 refurbishment: four of the concepts (Night Mask, StarBrand, Project: Spitfire, and Justice) as well as the episode which caused these superpowered beings to appear, called the White Event. But Mr Ellis strengthened the hull with his characteristic deft skill. Mr Ellis’ parallel earth had Chinese lunar cities (which seems quite prescient given China’s current lunar aspirations to build a base on the Moon by 2031 https://bgr.com/science/china-moon-base-russia-5913317/), Hillary Clinton as president instead of George W. Bush (again, well-before Mrs Clinton’s tout for presidency in 2016), the World Trade Center towers in New York still standing, and John Lennon alive and well in New York (it was instead Paul McCartney who was shot dead). These small touches, which are not elaborated upon, are waypoints of an Earth recognisable, but plainly different.

There are superheroes, but, typical of Mr Ellis, he eschews the caps and masks. Manhua shop worker Izanami Randall (Night Mask) can enter an extra-cosmic space called the superflow, use it to travel vast distances, and communicate with the giant machine which is an interface for those responsible for The White Event. Police officer John Tensen (Justice) believes himself to be in hell: he awakens from a coma with the ability to see evil in the souls of other people, and sets out to kill them all using a power which generates both shielding prisms and blades. Footballer Ken Connell (Starbrand) is splashed with a cosmic power which overflows and incinerates his girlfriend, but which when wielded could crack the planet.

Mr Ellis also tells us that The White Event was not a singular occurrence. Phillip L Voight, presiding officer of a tiny spook outfit called Project: Spitfire, is the figurative sniper on the roof. He watches out for evolutionary jumps which might see humans subordinated by super-powered predators. In 1959, after a celestial event called The Fireworks (an identical episode to The White Event), Voight tracked down and killed a sleeping toddler in order to prevent the manifestation of a superhuman. Voight is not evil, despite his brutal murder of a child. Voight instead has a mission to protect humanity from the advent of super-powered people, which comes at a terrible moral cost. (Voight also tells his scientist, Dr Swann, that there was another event in 1888, which sounds very akin to the quite-real Carrington Event in 1859 https://en.wikipedia.org/wiki/Carrington_Event ). Voight is very busy wrestling with the tangential consequences of the sudden appearance of superhuman people: what if the Chinese find out that they are all in the United States and decide to launch a strike?

Dr Swann is also touched by The White Event, and has become some sort of machine interface. Up to the poiint she discovers that she has also been affected, and that her budget to create a super-human killing armoured suit has been increased twentyfold, she seems to enjoy talking to her flawed creation while drunk.

Mr Ellis draws upon many of the themes which he is fond of in writing superhero comics. These include the ideas that superhumans are not automatically altruistic or malevolent – Justice fits into neither camp, and the other three seem completely out of their depth rather than ready to take on the mantle of being Earth’s defenders like The Avengers or the Justice League. Mr Ellis also again raises the idea, as with his work on Stormwatch, The Authority, and Planetary, that superheroes are a form of planetary defence mechanism akin to antibodies. New to his musings in newuniversal is the idea of a living creature existing outside Darwinistic selection. This stands-out in a Marvel Comics’ title. Marvel Comics’ mutant superheroes are the improbably consequence of evolution, and the subject matter is thus the focus of many of the American publisher’s titles. But Mr Ellis intriguingly talks about The White Event being a post-evolution occurrence.

The idea was sadly not elaborated upon, for Mr Ellis left newuniversal in October 2008. (Mr Ellis fulfilled an almost identical mandate with DC Comics’ Wildstorm continuity, rebranded as The Wildstorm, in 2017, which we reviewed – see https://www.worldcomicbookreview.com/2017/11/16/the-wildstorm-2-8-review/). Having pushed the boat off the beach, Mr Ellis had no desire to sail in it.