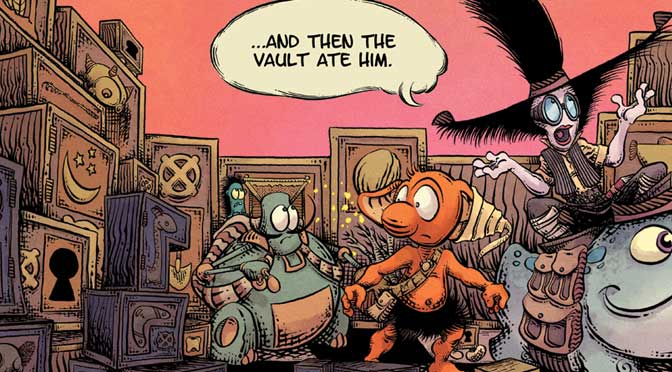 We do not know who the writer of this comic is. We would very much like to know. The reason for that is because this comic is fun, clever, whimsical, and entirely beyond the skills and resources of the average creative writer/artist. Our best guess is that there is some large company sitting behind this publication and choosing Kickstarter for reasons unknown (global brewers do this – sell lines of “craft beers” under rough-hewed sub-brands in order to tap into the snootier end of the beer market). Or perhaps some well-known and honed creator/publisher such as veteran Dave Sims is having a quiet laugh.

A cute goblin named Fairlaine arrives in a place called Vaultland. Despite having had adventures addressed in four other volumes, the comic is immediately accessible and requires no understanding at all of any backstory. It is clear from a previous adventure that Farlaine and his companion, a “tink” (robot) named Drowsy, are conveying, by way of a patched sack, a small tree called Ehrenwort. The tree is looking very much worse for wear after their last adventure in Twistland, and so Farlaine decides it is time to plant it.

Engaging in some misrepresentation and omission, a moustached frog/cat realtor named Jabs Jibber sends them into the Vaultlands to find a forest. “Vaultlands vaults have everything!” Jabs Jibber exclaims, leading them through the puzzle door entrance with the magic words, “a farglestumper”. And it is true. There are vaults full of giraffes, walking vaults, vaults full of meek dragons, vaults full of key-making tools, and, ominously, a vault full of broken tinks. Vaults can be opened by keys, magic words, the bump of a tink, and even liquids. Farlaine and Drowsy meet a hatted, hairy, fun but nameless companion who, embarrassingly, has been locked out her own vault. She rides a strange beast named “Pouches”. She is the guide to both the characters and the reader. The hatted companion complains that she had no luck cracking a particular vault. “I tried every liquid I could think of! Water, milk, juice, eggnog, earwax… even pee and toe-sweat! Nothing worked. Just made it smell funny.” The humour is aimed at children, but is also knowingly wry.

The anonymous writer has some fun with the setting. “Those vaults look so fancy!” exclaims Drowsy. “The older the fancier!” replies their guide. “A rich blonde kid owns one, a miserly old duck another…” We do not see the classic, well-heeled American characters Richie Rich and Scrooge McDuck, but we can laugh at their presence.

The humour has style and thought. Farlaine, Drowsy and their companion stand in front of an enormous vault door. “The oldest and biggest vault in the vaultlands! Good luck getting it cracked,” says their companion. “The puzzle’s too simple, which makes it tricky.” The puzzle as it appears on the vault is a straight line. Simplicity is complex. The writer has borrowed from Leonardo da Vinci: “Simplicity is the ultimate sophistication.” And then, Drowsy notices that it looks like a moustache. His own moustache opens the vault. The absurd humour continues as the trio find that inside the old-old vault is a landscape filled with even older vaults.

The only thing missing is time. The Vaultlands are timeless, and so whatever, or whoever, is stored in a vault is free from the effects of aging. “So I say why fight it? Enjoy the immortality?” says their new friend. “And what do you do to occupy the immortality?” asks Farlaine. “Mostly wander in circles and crack vaults,” she replies. Being immortal clearly has its limitations in respect of purpose. As the story progresses and Farlaine and Drowsy get caught up in the excitement of finding new things, the new friend suddenly finds it all too much. “Endless vaults and all the time in the word…I don’t want all the time in the world anymore.” Life is short for a reason, so that it has purpose. The message is that without purpose, endless time is a burden. The contemplation of eternity recalls Aristotle and Parmenides. The whimsical children’s cartoon hides its weight. The puzzle is indeed too simple.

Eventually the characters find trouble, in the form of a “pointy toothed fellow” – a malevolent lion/dragon. This creature likes to dissect tinks to see what sort of random objects are inside. He is fascinated by Drowsy, the only tink he has encountered which talks. Instead the torn shell of a tink is a collection of master keys. The friends grab and run. Farlaine and Drowsy say goodbye to their friend, giving her a master key so she can re-enter her vault. Despite a warning, (“We can’t open a random vault! We might let out something worse!”) the friends open a vault… only to find the master key does not work. Or does it? A hole in the ceiling opens! Ehrenwort grows Farlaine some wings made out of bubbles! The friends float away! The dragon is left muttering in the vault, promising to hunt Drowsy down.

A review by Adventures in Poor Taste has “minor gripes with a few transitional scenes. There are some brief occasions where characters’ behaviours strike me as odd within the larger narrative context, but nothing is ever jarring enough to be too big of a problem.” We think this is overblown as a criticism. Indeed, the crisp and detailed art does much to smooth the way towards understanding the plot. Leroy Douresseaux at Comic Book Bin is succinct: “I was surprised that a comic of such high quality could not find a publisher, forcing the creator to self-publish it. After reading the fifth issue, I am still surprised that Farlaine the Goblin is not a huge hit and a multiple Eisner Award nominee.”

We agree. It is bizarre that this title does not have a mainstream publisher backing it. We end where we begin – that this very high quality self-publishing exercise is actually some sort of big-publisher conspiracy. Regardless, Farlaine the Goblin is available via Kickstarter.