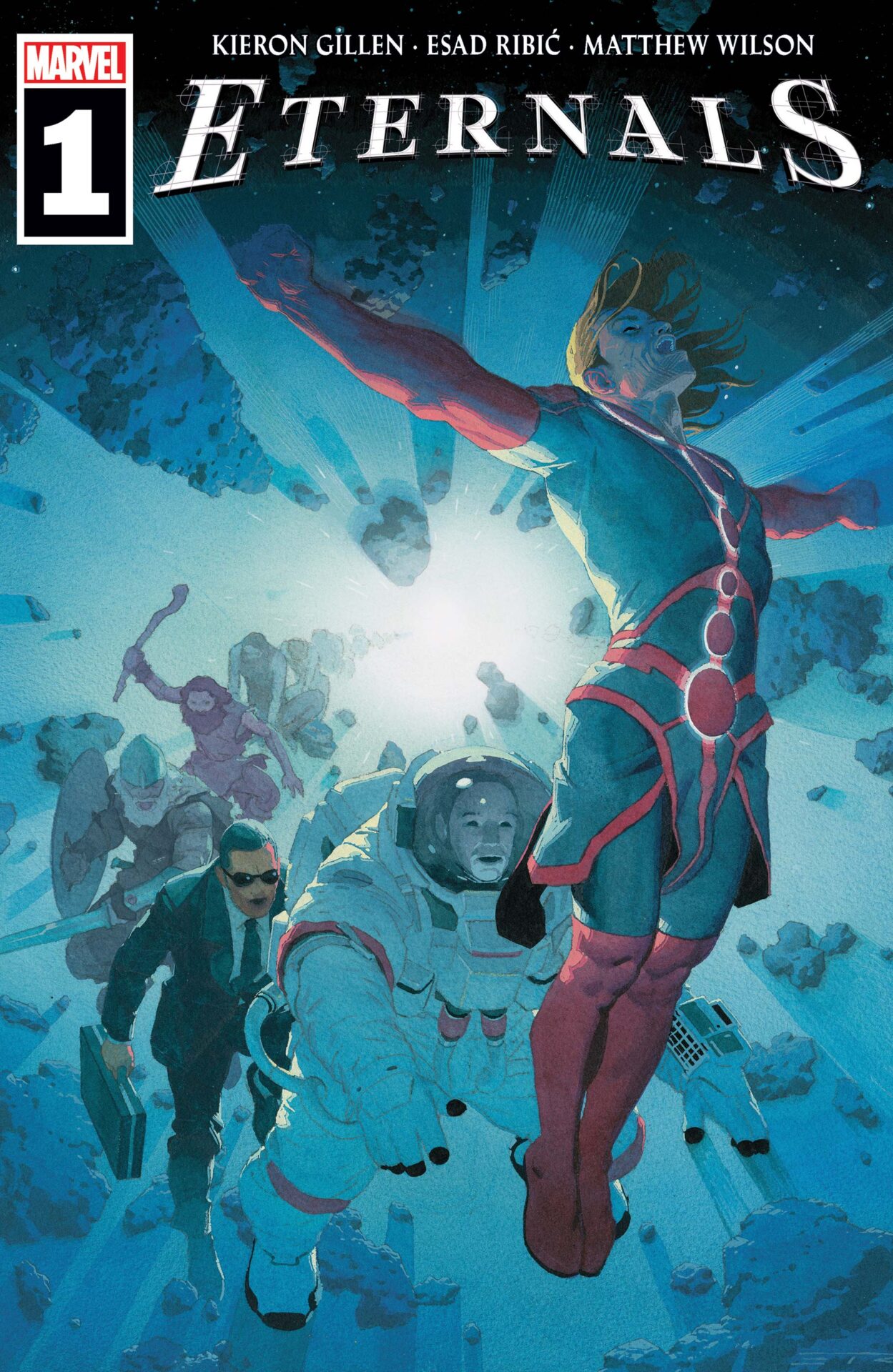 Marvel Comics’ terribly dated property from 1976, The Eternals, is a little unexpectedly becoming a motion picture due for release in November 2021. Marvel Comics’ owner, entertainment multinational Disney, has raked through Marvel Comics’ vast continuity and found some gems in the muck: it appears willing to take a punt on a wide variety of concepts. And with millions of dollars being poured into a movie about The Eternals by its parent, it makes inherent sense for Marvel Comics to try and release a comic book about the characters to capitalise upon the promotion of the movie.

Blowing dust off the obscure and turning it into something which is engaging is tricky business. Concepts become obscure because of weak sales. If no one liked them in the past, how to make them popular in the present? Even writer Kieron Gillen, who did so well with his title The Wicked + The Divine https://www.worldcomicbookreview.com/2018/10/19/the-wicked-the-divine-mothering-invention-volume-7-review/, seems perplexed by the material he must work with. From the introduction: “A long long time ago, alien space gods came to Earth. They made 100 Eternals. They made 100 deviants. They left. ¯\_(ツ)_/¯“

Mr Gillen resorts to an old trick and a new trick. During a scene in New York City, where the grumpy loner-type character Ikaris is causing a scene with his sister Sprite, we see the familiar red and yellow armour of Iron Man. And on the very last page is Marvel Comics’ evergreen bad guy Thanos, looming out of the shadows and promising death. Such interweaving of popular characters, the proto-crossover, helps hold a new reader’s attention.

The new trick is borrowed from the playbook of writer Jonathan Hickman. Mr Hickman has been using infographics as a means of conveying background and mystery, dovetailed with conventional comic book art. We have previously applauded this: it was used by Mr Hickman with great effect in The Black Monday Murders https://www.worldcomicbookreview.com/2016/12/11/the-black-money-murders-1-2-review/. More recently Mr Hickman has deployed infographics in various X-Men titles https://www.worldcomicbookreview.com/2020/10/13/x-of-swords-creation-1-of-22-review/for Marvel Comics. The Eternals #1, with its data driven representations of the allegiances of characters and where they sit in their various interdimensional kingdoms, suggests that infographics will become a common phenomenon in the Marvel universe. (It will be interesting to see if they permeate Marvel Studios.)

Mr Gillen struggles with Ikaris, an inherently unlikeable figure in the Eternals’ world, and tries to dilute or contrast that grumpiness with the upbeat and churlish Spirite. There is a murder mystery when the Prime Eternal is found with his head crushed (Ikaris is a suspect for about a page: when he finds Thanos the mystery is immediately solved). But otherwise, there is not much to this first issue other than a lot of background and a half-hearted chase by Ikaris of Sprite. The narrative is The Machine, the technological infrastructure/ artificial intelligence which harbours the Eternals and causes them to be reborn when they are killed (hence their collective  name). Even The Machine notices that it is being uncharacteristically chatty in providing the monologue describing the action and motivations of the players.

The artist, the wonderful Esad Ribic, must have strained some muscles trying to carry this concept. The art is dynamic and the power of the characters is well conveyed through their bulky presences in panels, and the unearthly backdrops to some of the action are moody and strange.

But, deploying a fine writer and an excellent artist on a tired concept is not a good enough reason to buy the second issue. For the purposes of Comic Book Round-up’s score card, we give this first issue 4 out of 10.