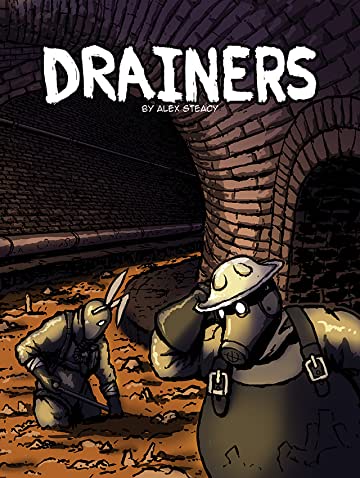 Poo smells bad – we want it gone and out of the house as quickly as possible. But the art of disappearance of the common human house poo involved more than a mere toilet and a flush. Some cities have subterranean labyrinths serving as conveyers of waste, out and away from those who live above. Some people use those systems as a means of disposing of other things. Humans dump trash into these pipes, and there has to be someone to help unplug the problems.

The promotional copy to this title, Drainers, reads as follows:

When your job is literally getting crapped on, how much worse could it get?

Chub and Coney are simple maintenance workers in the vast sewer system beneath a city they never see. They are overworked and filthy and live for simple pleasures such as seeing a bird, or some time off. One day, the subterranean ecosystem is thrown out of balance when a mysterious naked interloper starts causing trouble. There are plots afoot in the underground, and Chub and Coney have been given the unhappy task of clearing them away.

Collected all together for the first time, you don’t want to miss out on this Alex Steacy slapstick classic. It’s the best comic that takes place in a sewer you’re likely to read.

Comixology also notes, “Alex Steacy drew Drainers for the web from 2016-2017 under the name Dregs, and Cloudscape Comics is pleased to be able to bring it to you in print for the first time. It’s a bizarre adventure with unlikely heroes, a lot of humour, and a lot of heart. It is being retouched and re-lettered, and you’ll be able to hold all 150 pages of Alex’s art in your hands at last.“

It is a thoroughly enjoyable story. Chub and Coney are only identifiable from each other by their headgear. Covered otherwise in heavy duty industrial headgear. Chub wears what looks like either a pie dish or a British First World War helmet. Coney wears a pair of rabbit ears on his head (and, as we see, he has a deep sentimental attachment to his ornamentation). The other sewerage workers in the comic are equally only identifiable by such eccentric features, save for Chub and Coney’s boss, Bandy, who is missing an arm (which she has stuffed and mounted on the wall in her office as a warning about safe workplace practices). Creator Alex Steacy does a nice job on this, using these small details in his art to provide every character with an individual personality notwithstanding the standard issue personal protective uniform. And the art is in monochrome colours which works very well in exaggerating the dark landscape.

Chub and Coney encounter a mysterious woman who lives in the tunnels. She grew up in this foul environment: she seems not even mildly disturbed by the foulness, happily swimming in the effluent, and is extremely strong and inhumanly agile.

There is nothing titillating about her absence of clothing. She is just nude. The writer and artist, goes out of his way to avoid sexualising her. Initially Chub and Coney worry she is a zombie, and then wonder if she is a mermaid. The three characters find themselves in a stand-off with a mad man out to use the sewerage system and an enormous amount of explosives for pompous revenge.

This is a humour title, and a very good one at that, with some very wry humour and some laugh-out-loud dialogue.

But seeing running about, happily adapted to her environment, and the subculture of the maintenance teams, reminds us of HG Wells’ The Time Machine (1895). The nameless time traveller uses his machine to go forward to a future (802701AD) where humans have devolved into the fairy-like, weak Eloi, and the underground dwelling Morlocks. Mr Wells applied the theory of evolution to the class struggle. The upper class who lived in the surface gradually atrophied and became easy prey for the distance descendants of working class. Morlocks continued to service machines, though the purpose of their task was lost to them. In some ways, Drainers is a comedic prequel to The Time Machine. the workers below refer to those who work above the surface as “the topsiders”. The sky is a faraway mystery. The girl has evolved to thrive below the surface. If it was not so funny, it would be worrying.

Drainers is available on the Cloudscape Comics website – https://www.cloudscapecomics.com/product/drainers/ 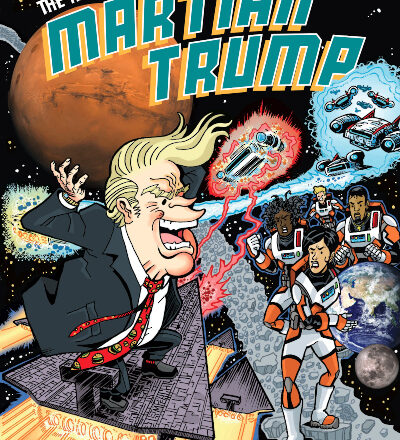 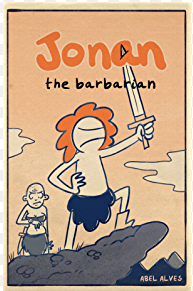 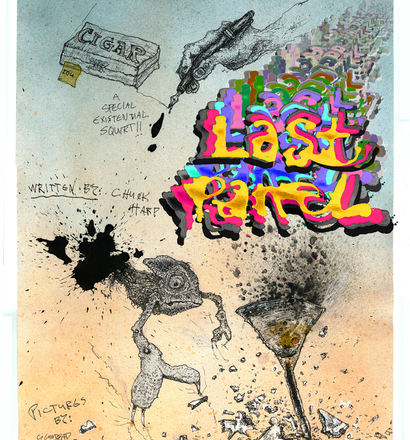