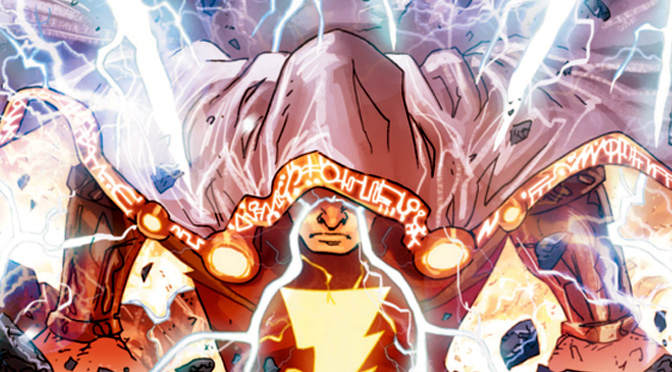 Litigation between National Comics (the predecessor to DC Comics) and Fawcett Comics lasted for 12 years. The dispute was concerned with an allegation of copyright infringement by Fawcett of National’s intellectual property rights: that Captain Marvel was too similar to Superman. In 1951, the US Court of Appeal agreed. The cape, the super-strength, the power of flight: in contemporary times these attributes are so commonplace that they are regarded as archetypical elements of the classic superhero.

By 1980 DC Comics had acquired the intellectual property rights to Captain Marvel. Indeed the character was extremely similar to Superman and was not especially commercially successful. Trying to distinguish the two characters from each other in stories was a challenge for writers. In one amusing panel in a 2002 story featuring both characters, the villainous Despero cracks together the skulls of Superman and Captain Marvel. Amidst the violence, the faces, general physiology, and powers were identical, and only the costumes were different.

Now, in 2016, it seems DC Comics have decided to address this. Shazam, as the character has been called since 2011 (thereby avoiding the longstanding issue with Marvel Comics over the use by both publishers of the name “Captain Marvel”), has been disconnected from a mystic link to six Roman gods and Greek heroes of antiquity. Instead, the character draws new abilities from six fictional gods, one of which appears to be Martian. As a result, the character is no longer fast or capable of flight, and instead is immensely stronger than before and projects flame.

One night argue that given Superman has heat vision that the changes are not especially pronounced. But the costume has changed too: additional stylization and a hood attached to the cape render the character visually distinct. The stylization ties the character to other DC Comics properties called the New Gods. These were created in 1971 by genre great Jack Kirby and, despite being very dated, are repeatedly drawn upon by DC Comics for inspiration and foundation to its continuity.

The plot to this issue therefore takes the reader, as well as Shazam’s alter ego Billy Batson, on a tour of the character’s new abilities and otherworldly benefactors. These gods chirp and snipe and growl inside Batson’s head in an intriguing way which seems positively schizoid, and is reminiscent of Gerry Conway’s work on Firestorm (in 1978 for DC Comics). It is executed reasonably well and is an exhilarating read – but that exhilaration, probably, is the character’s and the story’s failing.

When the character first spoke his magic word, “Shazam!” in February 1940, Billy Batson was transformed from an impoverished orphan and polio sufferer into the world’s mightiest hero. Polio was a scourge in the Unoted Srates and was especially prevalent and upsetting in children: before polio vaccines were available, polio outbreaks caused more than 15,000 cases of paralysis each year in the United States. Perhaps the most famous sufferer of polio was the United States President Franklyn Roosevelt. Following introduction of vaccines in 1955 and in 1963 the number of polio cases fell rapidly to less than 100 in the 1960s and fewer than 10 in the 1970s. It was officially eradicated in the US by 1979. Batson’s plight was miserable. He sold newspapers on the streets supported by a crutch. When he transformed into Captain Marvel he went off to engage in altruistic superheroics. And when he transformed back, hobbled by polio, your heart went out to him. Captain Marvel was, fundamentally, a fantastic escape from pathos.

Batson being a polio sufferer in 2016 no longer makes sense. But instead, Batson is a brash hothead, an impetuous but otherwise healthy, well-fed white American teenager. There is nothing particularly likeable about the character, let alone noble or admirable. Batson just happens to be a kid with superpowers. Even his sense of kindness is derived from a god patron, and the character is otherwise driven by a blind altruism, devoid of motivation.

This is in stark contrast with Marvel Comics’ remarkable effort on Thor, where Thor’s alter ego suffers from cancer and the transformation into the hero sets her recovery back. Thor is noble and self-sacrificing even without the powers. Shazam entirely lacks this.

It is still early days in this redefinition. It is also difficult to establish both an origin and substantive characterization in a single issue. But there is nothing exceptional to the character so far, and if there was to be, then the first issue would have been the best platform for it.